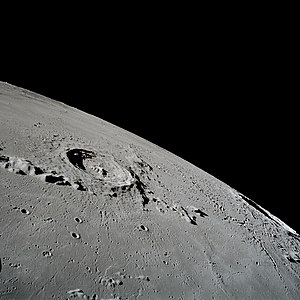 Eratosthenes crater, the home of Argo Station, as photographed by the crew of Apollo 17 in 1972.

Argo Station is the United States' manned lunar colony, established in 2005 and mostly-continuously inhabited since then. Located in the Eratosthenes crater, the base is used for research, weapons testing, and as a testbed for in-situ resource utilization technologies for future missions to Mars and beyond. Unlike Freedom, Argo Station is primarily a civilian operation, and thus isn't subject to the same restrictive privacy. As such, a lot more information is known.

The base features a mostly-self-sufficient greenhouse, a nuclear reactor, and comfortable amenities for the 18-person crew. Typically members cycle through on one-year missions, staggered so that the base has sufficient personnel at all times. Although originally closed off to non-Americans, starting in 2011 international partners have had astronauts flown (most notably, the arrival of two Soviet cosmonauts in 2017, the first space cooperation between the US and Moscow since the Zvezda incident). Several space tourists have visited the station, along with a handful of private astronauts performing for-profit research for American industry.

Notably, Argo Station performed a landmark study on parahuman science, when the first known parahumans, Protectorate capes Big Sister and Cloudbuster, visited the base to perform power testing experiments and PR jobs. They found that, while on the trip over, their powers became less and less effective, culminating in an estimated 90% weakening of their powers during their stay at the colony. Detrimental mental and emotional effects were also noted. The cause of this phenomena remains unknown, but their powers recovered fully upon their return to Earth. Future studies have been proposed.