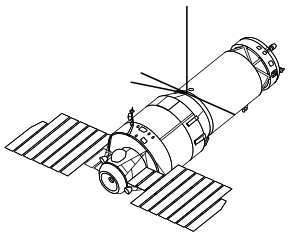 Illustration of the core of Laika as launched in 1999. It was quickly expanded upon in the following months and years with many new modules.

Much like their American counterparts, the Soviet space programme was given a kick-start by the arrival of Wild Hunt. Plans had already been in place for Mir to replace Salyut 7, however due to an over-ambitious acceleration in the development (or American sabotage, as some of the more militant second-world figures would have you believe), Mir's November 1985 launch failed to make orbit.

To add insult to injury, After Zvezda (the backup to Mir) launched to orbit in 1987 it was found that several key systems, including the life support and battery charging systems, had been damaged. Upon further investigation this was linked to sabotage, which the US denied and continues to deny to this day. Nonetheless, this resulted in the outright cancellation of the Mir program and a return to the base Salyut designs.

In 1988, Salyut 8 was launched, using hardware adapted from the unused OPS-4 station left over from the military Almaz program. It remained in orbit for five years, performing various scientific and military research. Salyut 9 replaced it and continued its legacy for another seven years. However, Salyut 9 marked a notable departure from the Soviet space program's secrecy.

From the beginning, the crew of Salyut 9 were thrust into the limelight, with regular television and radio broadcasts from the station. Compared to the reclusive Freedom, Salyut 9 seemed almost designed around the media, with attention-grabbing experiments, regular lessons taught from space, and in 1998, the first child born in space.

Yuri Artemyev's story not only shaped space travel in the 21st century, most would argue he defined it. Due to having been conceived and born in microgravity, it was quickly found that it would be nearly impossible for him to survive on Earth's surface, much less endure the g-forces of reentry. He would live and die in orbit.

Salyut 10 (christened Laika after a nationwide naming competition) launched within months, a modular station intended to become the home of humanity's first true spacefaring citizen. Like its predecessor, Laika remains a PR spectacle, even more so with the eyes of the world on its permanent crew member.