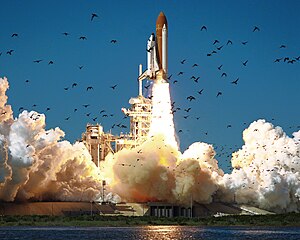 Challenger lifts off from Pad 39B, moments before disaster.

When Discovery grew an extra person somewhere between Pad 39A, low earth orbit, and back to Kennedy, the whole thing was taken to bits, the whole launch torn apart and investigated. The whole operation, with the fervor of the Apollo 1 investigations decades earlier, resulted in no signs of how Wild Hunt had gotten there, or of any interference that may have occurred. It was troubling, to say the least.

However, it did bring to light some issues with the Shuttle that had been pushed under the rug. O-ring seals in the SRBs—the big spicy toothpicks that gave it a huge kick at the start of launch—had a fault, that would result in disaster should they launch at too chilly a temperature. Meetings were held, middle management was laid off, and most importantly, the SRBs were retrofitted and made safe.

All this meant was, on the chilly morning of January 28th, 1986, Challenger took off, and the entire US space industry was confident nothing would go wrong. And then it did. The media called him Bird Strike, but to US intelligence he was Sokol, a renegade member of the secretive Soviet cape programme. We can't know why he decided to plow into Challenger that morning, killing himself and the entire crew, but the result was a cold war threatening to boil over.

This isn't an article about the Challenger Accords though, that's someone else's cross to bear. The fact is, however, that if Challenger had made it to space, the US never would have been near Chernobyl when the first Endbringer made its mark. The Accords would never have happened. Obviously, nobody knows for sure if that O-ring seal would have failed, but had it beaten Sokol to the punch, who knows how things might have gone...