From WormRP
(Redirected from Swordfish)
Jump to navigation Jump to search 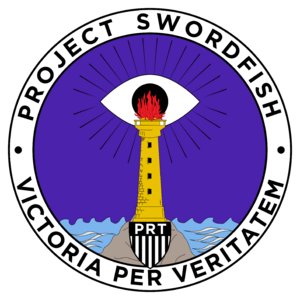 The age of parahumanity brought with it great sweeping changes, upending in one way or another every aspect of society and civilization. And yet, for the average everyday citizen, things remain mostly similar to what they were prior to 1986. There's still schools and supermarkets and banks and the stock market, and everything else that we call central to our way of life.

And yet, anyone who's looked into capes tells you that shouldn't be the case. That a Thinker with the right skills could upend your bank and drain all the accounts without breaking a sweat. And yet, for the most part, that doesn't happen. Why?

The short answer is because in every major city in the United States, there are Thinkers looking out for you. Capes who have rejected the siren song of fame to work in the shadows, securing our national interests and insuring no enemies, foreign or domestic, can take away our way of life.

Project SWORDFISH began in the early 90s, as a PRT project to organize the "misfit toys" of the cape community. Those with physical powers found themselves working containment zones and classified overseas operations in cooperation with the military, those Tinkers and Masters who worked well enough with others were pushed into NUCLEUS, and SWORDFISH was for the Thinkers.

It initially started out as threat assessment. Protectorate captains could ring them up, give them the low-down, and within hours get a step up on whatever problem befell them. This service earned SWORDFISH the moniker "Think Tank", which it still bears today despite its greatly evolved mission.

As the numbers of capes grew and grew, so too grew SWORDFISH. The organization began opening field offices and black sites all across the country and abroad, enabling it to keep up with the ever growing needs of a nation beset by villains, quarantine zones, Endbringers, and so much besides.

Notably, unlike the relative openness of their Tinker brothers and sisters, SWORDFISH's internal operations remain highly cloaked in secrecy. What little does get out paints the organization as a true three letter agency, with their intelligence gathering and analysis being accompanied by the more-than-occasional disappearance of problematic individuals. While officially an organization under the PRT, in effect the head of SWORDFISH reports to the Director of National Intelligence.

Due to SWORDFISH's secretive nature, most known projects are collaborations with outside agencies, most notably NUCLEUS. However, the exact SWORDFISH-related details of these ventures remain hard to come by.

WATCHTOWER
A constellation of orbital satellites providing monitoring of existing parahuman-related concerns, as well as aiding threat assessment for future issues that may arise (such as Endbringer attacks).
CANARY
The ground-based complement of the WATCHTOWER constellation, CANARY provides localized intelligence gathering capabilities as well as acting as a key part of the PRT's resilient Endbringer warning systems.
PANOPTICON
PANOPTICON was developed at the NUCLEUS AI Research and Development Site to combine intelligence data from all sources and use predictive analysis to provide a reliable precognitive threat analysis product. While rollout of the program continues, it has been moved from "experimental" to "operational" status following its successful demonstration of capabilities in the lead-up to the Famine (II) attack in Almaty.

Jackpot
Based out of the New York Protectorate office, Jackpot acts as the "face" of the organization to most PRT-affiliated capes. They are responsible for the daily intelligence briefings sent each morning to PRT field offices across the country.
Dead Ringer
A Chicago-based Thinker/Stranger, known to perform regular security audits both in the Midwest region and beyond.
Big Sister
Formerly a B-lister Protectorate cape working in the Tillamook County PRT field office, she rocketed (literally) to fame in 2012 when she flew to Argo Station as part of a join NASA/PRT experiment. It was later revealed she was (and remains) a member of SWORDFISH alongside her Protectorate obligations.
Cuna
One of a few NUCLEUS/SWORDFISH dual-nationals, Cuna acts as the liason between the two groups. His magnum opus is the PANOPTICON project which recently reached operational status.
Windup
SWORDFISH member based in Dallas. Often provides input for A/S scale events.
Soothsayer
One of a select few known "true precogs", Soothsayer is a vital member of the SWORDFISH team. He is based out of the Washington, DC Protectorate Headquarters.
fisheye
Although officially based out of the Minneapolis SAU, fisheye is known to spend most of his time roving between various SWORDFISH black sites across the US.