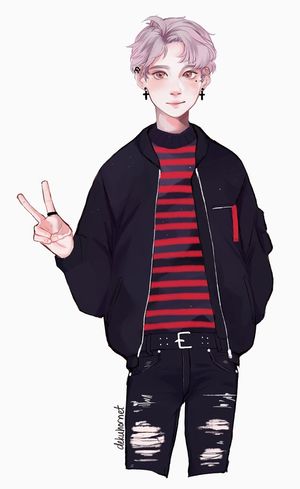 Melanie out of costume.

Melanie is a teenage girl, with a distinct appearance, primarily this is due to possessing Albinism, but secondly because she is very athletic for a college freshman. Melanie has short white hair. She generally wears dark clothes of a more casual variety.

Skillset’s costume consists of a full-body jumpsuit with lots of pockets for gear, she wears a pair of durable goggles that can mostly only ever be glimpsed from under her costume because of slight reflections of the lenses. Usually she wears a surplus kevlar vest (type 2) with the outfit.

Melanie has a very straight forward view of the world, she has a seemingly unwavering confidence regarding her own actions. The kind of person who doesn’t hesitate to ask someone out if she has a crush on them. The kind of person who can ask for a raise at work without batting an eye. She isn’t arrogant, although some people may get this impression, she just doesn’t really feel much at all in the way of social anxiety, even the normal amount that most people experience.

Has a decent allowance for helping around the house, lives in a pretty nice house, has an electric scooter, and a conventional bicycle.

Works part time at her parents rather popular restaurant.

Melanie possesses the ability to copy (not steal) any individual's most proficient skill by making physical contact (20 Seconds) or direct unbroken eye contact (35 Seconds) This has no negative effect on the person who's skill has been copied.

What counts as 'Most proficient' can vary from person to person, its usually either the skill with the highest amount of technical skill involved, alternatively it can be the skill that a person is most proud of/uses the most. (whatever is best for the narrative)

While Melanie can copy the most proficient skill from any unpowered person only once, she can copy the skills of a powered individual more than once, although she has a 2 month (IRL time) cooldown between being able to copy skills from an individual a second time (or third, or fourth, etc, etc)

Her power has a higher than average mental influence over her behavior, mainly in the form of strong compulsions to practice and hone her current skills, as well as to ‘encourage’ her to collect new ones on a semi-regular basis.

Her power helps her organize these skills into distinct categories, using a 5 pip system (in the vein of Chronicle of Darkness skills)

This is primarily to keep things simple and easy from a Meta and Approval stand point. Some of the categories may have some crossover, or sub-categories for things that may be too broad for one category

Bladed Weapons (Claw Weapons) is applicable to both actual claws if I obtain them via power shenanigans, or to claw-like weapons (Push Daggers, Bagh nakh, Karambit, Bladed-Brass Knuckles)