Citizens of Idaho and western Montana might be familiar with the Misfit Maid, a villainous-leaning vigilante with a pastel-colored baseball bat and a habit of leaving chaos everywhere she goes. She had a several-month stint as a Ward in Ashton, and just when people thought that maybe the maid-themed chaos gremlin had become a proper hero, she defected along with Blur.

It has recently been confirmed that she (and presumably Blur) has relocated to Devilfish. 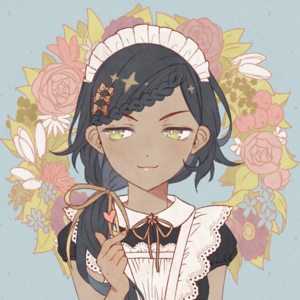 Invariably looks like a pretty girl, but the specific details tend to change. More recognizable by her costume, a vaguely-punkish anime maid outfit with chunky boots. It's an aesthetic.

Lives in a sapphic cabin in the woods.

It's pretty easy to tell she was a solo act prior to Ashton. Doesn't work well with her team, inherently distrusts authority figures, will disappear for hours at a time. Fanta's gonna love her.

There's more underneath that, but if you want to learn more you'll have to earn her trust, and that's not something she gives out easily.

Misfit is a changer with the ability to transform into a chimera-like assortment of various mythological creatures. While she has control over when her changer state activates, what it turns into is randomly selected between pieces of three different forms.

When first transforming, she gets two shifts, and every other round thereafter she gets one more shift. On her off rounds, she can optionally push another shift, but this can be her only action that round.

For a shift, first ~choose Head, Left Arm, Right Arm, Left Leg, Right Leg, Torso, and then ~choose Dragon, Serpent, Roc. If that part hasn’t been shifted, gain one level in that form. If it has, and if it’s the same form, upgrade it to level 2. Optionally you can instead revert a level, back to baseline human. Once a part makes it to level 3, remove it from the ~choose rotation.

Example 1: Lily rolls Head, Dragon, and her head is currently Roc 2. She can either pass on changing, or revert to Roc 1.

Example 2: Lily rolls Head, Dragon, and her head is currently Dragon 1. This allows her to upgrade to Dragon 2, but if she wanted she could also revert her head back to Baseline.

Just chillin’ in her Changer state is possible, however for balance reasons she cannot mechanically go above Level 1 except in actual combat (as in, maybe she wants to chill as a dragon today, she can appear as the full form, but it’s all bark and relatively little bite). Note that being in her Changer form does prime her shard for combat, so she does become noticeably more aggressive.

When ending her state or reverting to human form, since shards give no fucks her human form will be completely random and she could look like any combination of person. Thankfully, her power provides minor shapeshifting that lets her change her appearance at will, on the scale of 5-10 minutes to fully adjust. She must remain roughly the same size and shape (ie no turning into a child, or a not-human).

Abstract: Ada County Sheriffs Office received a 911 call at about 11:00 pm requesting medical assistance to [REDACTED/Legal]. Call was flagged by PANOPTICON and forwarded to Boise PRT for follow-up. Due to lack of on-duty heroes, BOI-2 response team dispatched and arrived shortly after medical and police.

BOI-2 interviewed [W3 REDACTED/Legal] and [W4 REDACTED/Legal], who stated they had hired V1 and V2 to transport their son, [S5 REDACTED/YG] to a "troubled boy's camp" upstate. Son was unwilling to leave, and when grabbed by V1 and V2 he collapsed and allegedly turned into "a weird dragon thing". A fight occurred and ended with S5 escaping the scene. V1 and V2 not able to corroborate story due to being unconscious.

When asked about S5, parents stated he had never shown signs of powers prior to this, and was being sent away due to "disrespect" and "homosexual tendencies".

At the current time no action can be taken until S5 is recovered.

Summary of Events: Whilst patrolling the residential district of Boise, known villainous vigilante MISFIT MAID was spotted in costume by BLUR refueling a high-performance motorcycle whilst twirling a highly-modified baseball bat. Due to the plausible suspicion that Misfit Maid was gearing up for an attack against targets that would fit her MO (thus far, seeming to consist of especially bigoted hooligans, private militias, and churches affiliated with “conversion therapy” operations) Blur elected to pursue her discreetly as advised by the on-duty dispatcher. Despite reasonable precautions being taken, Blur’s pursuit was detected by her quarry via unknown means and the Misfit Maid was waiting to confront her at the parking lot of the Our Lady of Divine Incontinence. A brief verbal confrontation ensued, in which Blur was unable to convince Misfit Maid to cease her planned destruction of the (fortunately empty) church. This prompted a more physical confrontation, after which the injured Blur was able to escape and unable to entirely prevent the church being set ablaze.

hello gentlemen, another day in paradise in Boise and i have a problem. denver has kicked the bucket back down to me and this is way above my pay grade

so no shit there i was last night, sitting in my office when i get a call from my secretary Becky. She says come down here so I come down there and there's a villain passed out in the lobby. Becky says to me that she went to get a coffe and comes back and this kid's just on the floor.

We take her into custody and treat injuries and all that standard shit. becky pulls the tapes and it looks like she just stumbled in, said something the cameras dont pick up, and collapses.

kid wakes up so we go to interrogate her, she cant remember anything. literally anything. looks like my daughter after i take her phone away saying "i dunno" to everything we ask. doesnt even remember her cape name.

Now, before all you city boys get your panties in a knot, obviously were trying to do this by the book. But we've had this kid on our radar for almost three years, this isn't her MO. This is the kid who burns down church camps and attacks militias upstate, shes not sutle. [ed: please keep the political hot topics in the politics thread! consider this your ONLY warning]

And even if shes a villain (pretending to be hero but not fooling any one!), shes still a kid. itd be easy to throw her to the wolves but that just doesnt sit right.

I tell becky to call the thinker tank, and they ship some retard in spandex up from Vegas to talk to her. Tells us what we already know, someone wiped her memory, and then he hands us a bill!

Next i call Denver for help, and after two hours on the phone Im informed that they got the people for this but theyre to busy to help? o.k. LOL. guess were on our own for this one boys!

Any one have any ideas here? nobody here has the training for fixing or dealing with someone memorie wiped. would rather not hang her out to dry but we also cant keep her in holding cells forever. Thanks

After consulting with our specialists and the Youth Guard, I'm going to go ahead and sign off on the transfer request for Misfit. They agree that time spent around a familiar face is the best course of action, and given her history Ashton will be a better cultural fit.

We'll go ahead and set up transportation arrangements to have a member of our Protectorate pick her up. Expect a follow-up email within the next couple days.