Kate, outside of costume, with her boyfriend Apex.

Tall for a girl, with long brown hair and bespectacled brown eyes. Never seems very happy, especially now. Right on the line between "boy" and "really tomboyish-looking girl" and oh boy is she salty about that. Noticeably trans.

She lives at home (on the north part of downtown, near the PRT complex), and makes about $500 a month from her job at the store. Has about $3,000 in the bank, originally for college.

Can run a Pathfinder game like no ones business. Decent photographer and videographer. Does a little programming but nothing serious. Aspiring artist, but no expert. Excellent gaydar. Terrible cook unless it's baking.

She does know a little bit of self-defense training from her mom. CPR-certified and knows basic first-aid.

Post-trigger, Kate has pretty severe trust issues, and would much rather go it alone than suffer through depending on someone. Any deal she does make, she's going to be watching her back every step of the way.

Radiance is a multitrigger (clustered with Cleanse and Nero), exhibiting three distinct powers. Note that at this time she has not used her Acid Hands ability in front of anyone.

Radiance can summon ghostly apparations and direct them at will (she can summon two at once, or one whilst in combat or in her angel form). They appear roughly humanoid, and are capable of interacting with their environment. These ghosts are connected to Radiance via thick lines of the same ghostly fog. If this line is cut (by slicing through it with an inorganic object, or cutting it off somehow with the same), the ghost vanishes and must reform. This line is like a rope or umbilical, and can be a max length of 50 feet (any attempts to stretch it past this will result in it being broken).

The ghosts transmit their sight to Radiance, but are incapable of posessing or processing other senses. They cannot pass through any tangible inorganic objects, however inversely, they can punch, hit, and otherwise manipulate these just like a person (water is, interestingly enough, solid to them, and they can thus walk on it). They are as strong as the average man. They cannot directly interact with organic or living objects (i.e., they cannot punch an opponent, but they can grab a knife and stab them).

These ghosts give off a golden radiant light, but make no sound or smell. Each ghost takes about six seconds to form, and she can have up to four active at any time.

Breaker states are affected as one would expect based on their material. Immaterial breakers and changers can be interacted with my her ghosts. They can pass through mist and other gasses/gaslikes no problem, but will have trouble with inorganic liquids and solids.

At will, Radiance's hands can secrete a substance with strong acidic properties capable of eating through any inorganic material (this is not Manton limites, so clothing, armor, and implants are fair game). She can eat through a one-inch plate of typical steel in about a minute, and for something like fabric it will be eaten away in a second (see Table 1 for exact figures). It has no affect on organic materials besides a faint tingly feeling.

The acid appears as a thick greenish fluid that oozes from her hands. It will remain active at full potency for ten seconds after appearing, after which it will promptly become inert. She can cover up to four square feet of surface with acid over a period of five seconds.

Breaker states are affected as one would expect based on their material. Immaterial breakers and changers are immune to her acid. 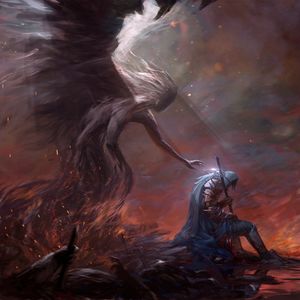 Radiance's changer form, and perhaps most powerful power aspect. She can change into a large, angelic monster over a period of about six seconds. It is about twelve feet tall with wide, dark wings. This angelic form has the strength and durability one would expect from such a large being. With her wings she can fly at a max speed of about twenty knots (this is not a power ability, simply flapping wings).

In this state, she (not her ghosts) can touch any object (Manton-limited) and cause it to disregard all gravitational effects present on it save for her own. For purposes of gravitational attraction to tagged objects, Radiance's changer form has a mass of 1x1012 kg (this is not her actual mass, this number represents how much mass she should have in order to produce her orbits).

The objects will enter a stable, usually-circular orbit around Radiance. To spare the reader a math lesson on orbital mechanics, values have been precalculated in Table 2. The satellites will adjust themselves as needed to maintain their orbit, and will continue as such until any of the following occur:

Radiance can "push and pull" the objects nearer or further away to her at will. This occurs at a rate no greater than 1 m/s2. The objects will adjust their orbits as appropriate. Objects cannot travel faster than 5 m/s or slower than 1 m/s (objects touched that would initially be too fast based on distance will move out as they begin orbiting). Objects can, of course, have any orbital inclination, however this is only practical when flying.