Persephone is a tinker and a member of Ashton's Protectorate. Well-known across the region, her distinctive appearance and outgoing perse-onality have made her something of a local celebrity, a subject she has mixed feelings regarding. She's been active in Ashton for a couple years now, so there's a pretty good amount of information out there about her. Her identity is public knowledge.

A casual cape fan in Ashton will know she's been around for about two years, is a public cape, has fought in several S-Class events, and would have all the deets on her physical appearance. Her arm's a lightning gun and grappling hook, and her tail has a bigass knife. She currently operates a prosthetics shop called Equinox.

She founded the Lambs (a former indie hero group) but left several months later and joined the Wards. It's rumored that she was forced out of the Lambs by her teammates going villain. She's also a known weeb. She's occasionally talked on interviews about coming to terms with addiction and PTSD that ultimately lead to her "resigning" her post as Ward Captain.

Just before being promoted to the Protectorate, she lost her leg fighting the Endbringer Pestilence in Zambia. She took the opportunity to upgrade her kit entirely a few days after the graduation ceremony.

Someone willing to put some effort into doxxing her would find that she was kidnapped several months prior to appearing in the Ashton cape scene. They'd know she had an incident where a Stranger "teammate" attacked her in public, and she was forced to use her napalm on him. A video of the incident is available on the depths of the internet.

With the right knowledge (Thinker power or specific contacts), it could be known that her substance abuse problem was due to drugs provided by the Golden Horde. She's occasionally fraternized with the villain Trick, although that has been cut off for some time. For a short period, she had something else going on... 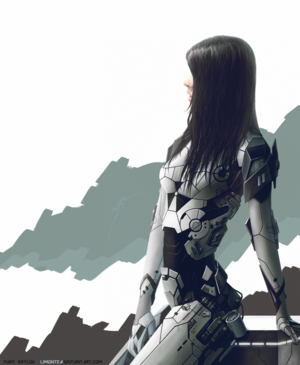 Brenna is a teenage girl, a little taller than average, with a lithe build that somehow looks both muscular and underweight. Messy dyed-black shoulder-length hair, left down. Emerald eyes. She has black cat ears that poke out of her hair, and a sleek black cat tail ending in a sharp retractable blade.

Her right arm is missing just above the elbow, replaced by a sleek black and white mechanical arm which constantly whirrs and clicks quietly.

On her back are a pair of dark wings, in the same style as her arm, with engines mounted off her shoulderblades. They're about ten feet wide when fully-extended, and when unfurled they shine prismatic. A careful observer might notice there's something built into her back, between and below her wings.

As for her costume, she's replaced her dress with something a bit more practical, seen in the image to the left (although in black and silver, as well as being sleeveless past the armpit to allow her to use her arm's weapons). Outside of costume, Brenna is most often seen wearing skinny jeans and a weebish t-shirt, with maybe a flannel if it's chilly out. All her clothes have been modified with holes in the shoulders to accommodate her wings and tail.

She has an apartment in the nicer part of town, as well as all the resources allotted to her by the PRT as a Tinker. She's still in contact with her parents, but is legally emancipated and living in a different city.

Some other small stuff, some of it not really Tinkertech... Perse's loyal assistant Zoe/Crowe will be helping with the surgeries and stuff as needed.

She's charasmatic, great at talking and listening to people. Has a pretty good memory, too. Her power has some bleed-over to medical stuff, giving her a lot of first-aid and surgical knowledge she wouldn't have otherwise.

Before she triggered, Brenna was a happy-go-lucky sort of person, always with a smile on her face. She was eager to help others even without getting anything in return. Naive about how the world actually works. After triggering, the old Brenna is still there, but... hollow. The smiles don't come as readily, she's a lot less trusting, and suffers from bouts of depression. After a fair amount of treatment she's been able to overcome a lot of her past trauma.

Tinker (Bionics): Brenna can create bionic implants and augmentations to replace and/or enhance the human body. Her augmentations must be "external" in nature due to maintenance and upkeep requirements (ie, a bionic arm or eye is fine, but not a tinkertech heart unless the user wants to have weekly surgeries).

In recent times under the alias "Epitaph", Persephone has started hunting human traffickers off the books, along with her girlfriend Shredshot (alias Fracas). Due to the need to keep extremely violent vigilantism off her Wards record, she has different equipment to mask her identity.