Shredshot is a former Ward Captain, on the run for a string of murders. Known to be aggressive, violent and maybe a bit amoral.

Known to be a Blaster, firing divisible projectiles that can become incredibly sharp, which have a Trump effect that can turn a variety of other parahuman creations into *more* of these projectiles, potentially turning an area blanketed in force fields into a daisy-chain of explosions of hyper-sharp metal shrapnel.

Rumoured to have a Thinker power that helps her with incredibly precise shots. Known to have a Trump aspect that let's her turn power generated objects into more of her own blaster ability.

PRT-Aligned characters would know that she is a Multi-Trigger and that she has a much more powerful Thinker power that helps to weaponize her environment in Rube-Goldberg-Machine matter, work her way around defenses (including Power-Generated ones) and enables her to pull off hyper-precise attacks - both in the attack and in it's effect. This power could be used to throw a needle into an eye from 20 yards or to collapse a building in record time. Trump aspect to power helps her find ways to exploit weaknesses in power generated defences. 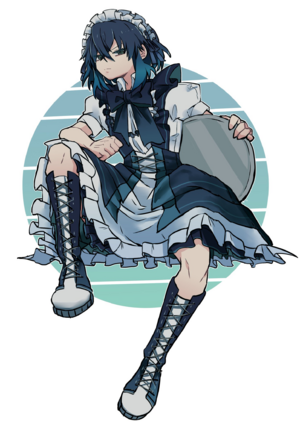 A slim woman standing at an average height, lean and quick. From head to toe she’s clad in a jumpsuit of a deep pastel blue with white accents along the sides and arms, small overlapping steel mail plates with a oil-rubbed nickel finish providing protection, embedded alongside the torso, arms and legs of her costume. A matching blue and white hood goes over the full face and neck mask, showing dark brown eyes.

Outside of costume, she has straight black hair that’s usually kept loose coming down to just her shoulders, dressing without any consistent style as she can’t decide what she likes best, while still putting in great care with each outfit to make them look great. She also puts great care in presenting the appropriate reaction to what people say and do, hiding what she truly feels, which frequently is disinterest. Instead, she presents herself as lively, sociable, likeable, although in moments of true surprise the ‘appropriate’ reactions can be off or a little slow to come.

Some light protection from the small mail plates on her costume, padding to help take a fall or a hit. Integrated comm set in her mask, a small and discreet utility belt with essential law enforcement tools. Carries no weapons with her.

Passable pianist for her age, a natural leader with a strong ability to organize and control those around her, some familiarity with knives and improvised weapons, knows how to drive, knows a little about how to operate farm vehicles.

A natural leader who knows how to care for both individuals and the group, who cares about maintaining the trust and opinion of the people she needs. Also has the capability for immense cruelty, violence and murder under the right circumstances, and is a manipulative liar with an impaired ability to love and truly care for people in a non-material way. Selfish, self-interested, but understands the need for group cohesion. If she was an adult she’d fit the criteria for antisocial personality disorder, the kind of person that would make for a natural ruthless corporate leader that climbs high up the ladder in a company like Nestle or De Beers. While every survivor of the Taskmaster Lab Incident has at this point been diagnosed with Conduct Disorder, she's one of the high functioning individuals.

In opposition to this she often finds herself confused by people's motivations, attributing amoral objectives to what other people have done frequently, constantly analyzing people and their behavior, trying to understand the patterns in what they're doing.

Growing up in the world she did has left her paranoid to the point of disorder, constantly looking for things that are off, people not acting quite right, things a little out of place. She’s used to dealing with backstabbing conniving sons-of-bitches, not people who could actually be genuine in their intentions and emotions. Nowadays, she often finds it useful to display emotions she isn't feeling, happy when she's not, sad when she's expected to be.

While one could argue that her paranoia is useful for a cape it often leaves her seeing threats and dangers where there are none, alienating those around her. She trusts nobody, views even those closest to her as a potential threat. She’s not above using a display of stunning violence and intimidation to prevent future danger.

Quietly, she has an internal view of some people being 'real' and other people being 'not'. Like NPCs in a video game. It's not some sort of solipsistic point of view, but more like most people aren't important enough to be treated as people, and she's likely to forget their names, let alone remember important information about them. They're trivial worker bees, not one of the 'real' people that aren't some easily replaceable drone. At a fundamental level she doesn’t ‘get’ what normal, healthy human interaction looks like.

Her relationship with Brenna started as a manipulative, parasitical relationship with her boss, but her outlook on this has changed drastically. She might be the only person that May loves besides herself. She would kill for her, put her life on the line for her, and she respects her as another human being, which is unusual for May.

She's committed murders that are best described as thrill-killing, and she may do so again.

Shredshot is a Multitrigger with both powers leaning heavily into the Trump side of the power spectrum.

Her primary power is a Thinker ability that allows her a heightened ability to tear apart, rend, destroy, interrupt and halt things around her through the sensing of weak points, the creation of Rube Goldberg-esque chains of events, and the manipulation of her environment. This allows for some level of ability to perform these tasks, if she must throw a brick at a certain angle with a certain force to hit the street lamp just right so that the glass spray gets the driver-by to jerk the wheel and run right over someone… she can and will make that throw. She can kick at just the right angle to make their knee give, to take advantage of body mechanics. This power does include other powers in it’s effect given that the power manifests physically. She could know particularly effective ways to harm the exoskeletons of Bitch’s dogs, but she couldn’t do jack to stop Skitter controlling bugs or Tattletale gaining logical leaps. It does not account for things or people hidden from her by powers.

It requires her to focus in on a target, be it a person or an object that is in her immediate area. This power does not work when she is unable to concentrate, pain and overwhelming her with sensory attacks such as flashbangs being an excellent way to disrupt her, as they are with many Thinkers.

There’s a component of ‘filling in the gaps’ with this power. In a chain reaction a candle falls and ignites the curtains almost immediately rather than taking several seconds. The nails holding a floorboard down pull out a little easier than they should. That power short causes an electrical arc that goes a little farther than it should so it zaps her enemy. This doesn’t go beyond some minor ‘movie magic’ but the things that happen shouldn’t *strictly* follow real-world physics.

This power is environmentally focused and gives nothing on other mental, emotional, societal or group weaknesses around her. While she might be uncannily able to break the physical world around her, if she wanted to break apart a friend group she’d be on her own in that regard. If there were no immediate answers to break a target her power would start expanding it's area to consider and looking for more and more complex situations that could lead to an acceptable result. This can quickly cause Thinker headaches and has no guarantee of providing a feasible solution, or any solution. She can cancel this search to prevent Thinker headaches.

Her second power is a Blaster ability, able to generate a baseballs weight in a metallic substance and fire it from her hands at 80 miles per hour. This material can be fired in one projectile or in many, and the further she subdivides it the more jagged and sharp the fragments become, like shrapnel. The spread on this is comparable to a street legal shotgun, a fairly tight 'cone', accurate but not covering a massive area. There’s a ‘sweet spot’ where this is a very deadly power, but in general she keeps it as either pelting someone with blunt objects or causing painful superficial wounds that don’t have the energy behind them to be more dangerous than porcupine quills. There's a slight delay between shots, preventing her from ‘machine gunning’ her power. These shards seem to travel much farther and in a straighter line than should be possible.

These shots can be charged to slip and phase through certain bits of the terrain - someone taking cover behind an enormous potted plant could get a nasty surprise as it phases through the cover and hits them on the other side. This effect doesn’t work on clothing or most armor. Possible exception for truly enormous sets of power armor or similar, at which point it’ll lose it’s phasing somewhere inside the armor as it approaches the person.

This ability has a nasty trump secondary to it, causing any physically manifesting construct or alteration of a shard power it touches to explode in a loose ‘confetti explosion’ of metal shards with very little force behind them, simply enough to disperse them in the area, of the same size as the original shrapnel. These secondary explosions are capable of chain reacting with other power generated or altered things in the area.

Tinkertech is not normally included in this secondary aspect. To be hit with this effect, the object must be actively in the process of manipulated with a power, or be a material actively being generated with a power to be affected. Certain tinkertech generated materials and things, such as a forcefield made out solidified light (hardlight) for example would be affected, but the actual physical ‘projector’ of the hardlight would be fine (Assuming it’s made out of steel, wiring, electronics etc.) Tinkertech is generally ‘real’ enough that it’s not included in the Trump effect.

The explosive trump aspect of this power does not affect organic things, and cannot convert ‘people’ into this effect. (No one-shotting the Human Torch).