From WormRP
(Redirected from Nucleus)
Jump to navigation Jump to search 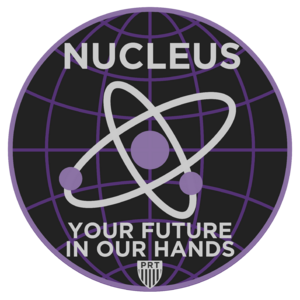 "Your Future In Our Hands"

Ever wondered where some non-Tinker got their cool power armor or gadget from? Well, the answer to that is simple: NUCLEUS.

Formed in the early 1990s as part of the PRT's five-year plan to nationalize parahuman crime divisions and government heroes into one organization, Project NUCLEUS exists today in a form similar to Project SWORDFISH (better known as the Think Tank among the cape fandom). It serves a similar purpose as well; while SWORDFISH collects Thinkers who may not work well on a team, NUCLEUS vacuums up Tinkers and even some minion-based Masters for the purpose of creating and maintaining tech for the PRT and its cape teams across the nation.

The core team of NUCLEUS is comprised of about 100 capes of various specialties, operating out of PRT field offices and dedicated facilities across the United States. In addition, NUCLEUS partners with Protectorate Tinkers and those of trusted private teams in an exchange program of sorts to further increase the specializations represented.

While NUCLEUS officially maintains no online presence, the website nucleusforums.net was started in order to build a community around the organization. The website bars access to all non-tinkers through various means, but has no other membership requirements. This semi-anonymous nature has led to Tinkers of all stripes, hero and villain (the smaller ones, at least), banding together to "talk shop". It currently exists as the largest online community of Tinkers besides PHO and an unnamed adult website.

Needless to say, the presence of a large Tinker organization has made them some enemies. In 2010, the NUCLEUS AI Research and Development Site in the former Cheyenne Mountain complex was attacked and partially destroyed by terrorists pledging allegiance to the Reclaimers. However, thanks to the help of its affiliate members, they were able to rebuild the NARDS in less than a year, with greater security. Today, however, many PRT facilities are hesitant to publicly indicate the presence or lack thereof of any NUCLEUS offices out of security concerns.