Celestial Wind has gained a reputation for causing a commotion where they go, using their powers for self gain as much as for getting a rise out of people. They've been open about their distaste of the old city of Ashton, fleeing to Devilfish after a confrontation with a PRT Strike Team resulted in one of the troopers shooting an ally in the confusion. 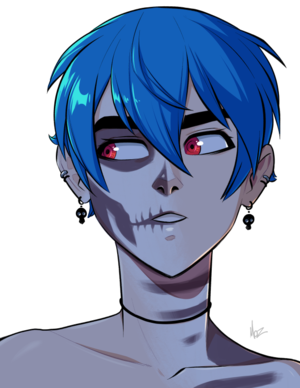 Celestial Wind is a troublemaker, a hooligan, and can be seen as outright mean sometimes. But they're just in it for the fun, not actively harming anybody beyond more than a prank or ruined day. 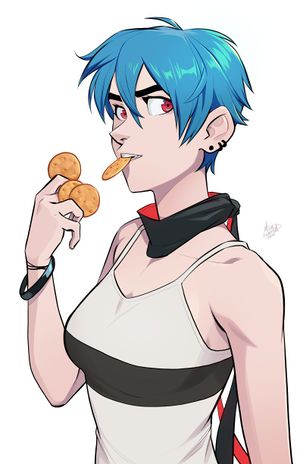 Celestial Wind having a snack

May instantly summon clones in order to take a hit, acting as a disposable shield.

May also summon up to ten (10) clones of other people, target must be within a forty (40) foot range to be copied.

These clones act autonomously, they retain the knowledge of their original but cannot share that information with others. Clones may exist within two thousand (2000) feet of Celestial Wind.

May be controlled directly, sacrificing awareness and control of self. Must be within one hundred (100) feet of clone to control.

They act as best as possible to blend in with their environment, clones are unarmed but have copies of their targets clothing/costume. Clones act more sympathetic or lenient towards Celestial Wind.

Breaker and /or Changer state capes may be copied within reason. (Flesh & Mundane Materials.) This means they are biologically identical to the original.

Tinkertech is normalized (Do not clone somebody in power armour.)

Clones last for thirty (30) days, unless destroyed or dismissed.

Clones may choose one sub-power to gain upon creation.

May create non-corporeal illusions. E.g. The skeleton "mask" they cover their face with.

Flight, manifesting a constantly flowing (even if there is no wind) cape in a red and blue swirled design when using this aspect of their power.

Control over direction and turning is perfectly controlled. (Allowing for backwards flight, upside down, or otherwise.)

May draw energy from the environment to form weapons, tools, or equipment at will. (These cannot be too complex. Rifle and Pistol complexity items cannot be created.)

These are created as though summoning an item from a form of hammer-space. (Note: The cape does not have hammer-space.)

Summoned objects are three (3) use, destroyed upon completion of service, striking a target, or being struck enough times. They may be targets for the Striker power.

Remove a wound from a target and store it in a physical object, weapon, or munitions.

May duplicate an effect (Power or otherwise) that the cape is suffering/benefiting from to store it in a physical object, weapon, or munitions.

Applies/Transfers those effects to the target when struck with the stored item.

If the stored effect is not passed along to a target within two rounds, it is returned to the original cape.

Gains a full body covering reactive forcefield that increases in strength relative to the force of the incoming attack.

Attacks with force lower or equal to that of a regular punch, pass right through without being blocked, delayed, or slowed.

Once every 7 days the members of this cluster will be shunted into a dream room. While every member will be forced to enter, there is nothing preventing any member from simply leaving after the connection is established. Powers cannot be used in the dream room, and no actual changes to the real world can be made via actions inside the dream room.

The dream-room resembles the vacation cabin that the the cluster triggered in, like a snapshot of their surrounding at the moment of their trigger, straying more than 10 feet from the outer walls of the cabin is impossible, as what resembles a storm acts as a impassible barrier, glimpses of a hazy humanoid silhouette can occasionally be seen deep inside the storm, but this is simply a part of the scenery. 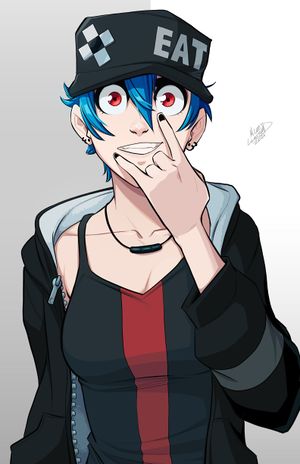 Celestial Wind mocking somebody as they back away

Claire grew up in Ashton with a tight nit group of friends from Elementary school up to graduation, some came and went but the core would never forget each other. They had a loving family and a good home to go back to, alongside all of their friend's homes. Each was a place that they would be welcomed with open arms.

Ashton's heroes had pulled through, Plague Doctor's plot to eradicate the city had been thwarted, just in time to restore the people's faith in the local parahuman population. And like so many other people, one group of friends had chosen to celebrate.

Isabelle was the rock that held the group together, sure there were other friendships among the group, but Everyone had Isabelle in-common, and she was the right kind of person to deal with the various personalities when they clashed on occasion.

It also happened that Isabelle had relatively-wealthy relatives, the kind of relatives that had a holiday cabins in the mountains, despite only using it once every decade. And lucky for them Isabelle had somehow convinced her Aunt to let them spend a week there for 'We aren't dead' celebrations. A small road trip into the mountains later, and they were set to have a good time.

Food, Drinks, Board games, some old game consoles, and good company meant that thing were looking good. Although there were a number of cabins in this stretch of wilderness, Isabelle's Aunt had said the Properties were abandoned, which was fine, it meant they could be as loud as they wanted without complaints from the neighbors.

Things had gone well at first but all good things must come to an end. In the aftermath everyone could pinpoint when things had changed from a fun vacation to something entirely different. It had all started when the Weather had taken a turn for the worse.

Nightmares had plagued everyone's sleep. Things started subtly. The atmosphere had grown odd, filled with anxiety, and distrust. Old grievances that had been long buried and forgiven had come to the forefront of everyone's memory, feeling fresh and raw.

Personal belongings were misplaced and moved, and no one would take credit for snooping in each others belongings, only adding to the distrust. People would swear that they had heard the others whispering about them from the other room, but this would be denied. The wind and rain were a constant presence outside the large cabin.

Isabelle was suffering from near-constant nosebleeds, and others were getting headaches, this had initially been chalked up to the higher atmosphere up in the mountains.

One morning the presence of a skinned and flayed deer lying in a puddle of blood in the living room had changed things dramatically. The changes were more overt now. The weather was like a hurricane outside, and yet the cabin was intact, the power was functional, although the TV and radio were static, and the cell service was flopping between zero and one bar of service.

The hallucinations were more blatant, voices, howling, feelings of dread. Someone or something was tormenting them. Why? Had one of them done something, and simply dragged the whole group into this fate?

They couldn't escape, the likely hood of calling for help was slim with their cell service this spotty. Isabella had taken thing the worse. her eyes were frenzied, she said they deserved this. She was manic, this had the effect of actually calming the group, as they prioritized watching out for their mutual friend.

They took shifts to sleep, and the nightmares were worse than ever. Whatever limited sleep they had was shattered when They heard the front door open, the howling wind entering inside, as Isabelle stepped out into the maelstrom, only for her flesh to be flayed from her body by the unnatural wind and rain.

The form of the cape was now visible, The group trigger had stunned the killer, his power requiring concentration, and time to ramp up. The presence of five very traumatized, very angry new parahumans wanted retribution for the death of their friend, and the torment he'd caused them. His fate was sealed.