Deadpan is a dramatic bitch, this is something that most who have seen or met them can agree on. An extremely frustrating Grab-bag.

An exceptionally flamboyant criminal. Mostly known for their ecclectic robberies, stealing cash from most stores they rob.

Associates with Arbhorrent openly, often clinging to/draping themselves over them in a manner reminiscent of Supermodel love interest and a secret agent in a Spy Film. 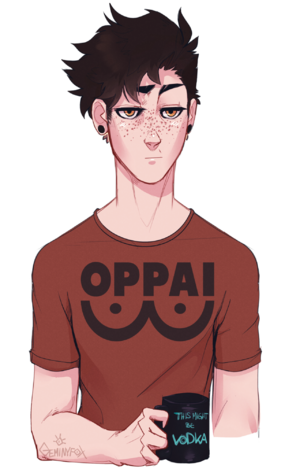 Archie stands at roughly 5'8, athletic as hell with a gymnasts body. He has pierced ears, and wears ironic and homosexual t-shirts. usually skinny jeans, but not afraid to wear booty shorts or a skirt with leggings. usually paints their nails black.

Costume: As Deadpan, Archie wears a very formfitting costume resembling a jester, the bells on their hat have been silenced though. They have several of the costumes made as backups, many with variants for special occasions, or different color palettes.

Lives in a fairly nice apartment in the GMPC building.

A strong believer of the idea of 'Be Gay Do Crime' and now that the have super powers follows up on that promise rather than just saying it ironically. Enjoys playing Boomer Shooters, and painting LGBT themed Warhammer models (Thousand son twinks anyone?)

He Had a crush on Brad Owen (Arbhorrent) pre-trigger the Kiss/Kill just solidified that a good bit. His feelings on the others are less concrete, something he wants to sort out eventually.

They moderate several discord servers, including

He is a drama queen, and enjoys it quite a bit. He likes annoying his friends and enemies in equal measure, likes saying Nya!~

Deadpan possesses a thinker power that provides the quickest and most efficient route towards a destination, along with the pre-requisite enhanced strength and stamina to be able to move quickly and utilize the routes provided.

The routes are optimized regardless of method, parkour, sprinting, swimming, climbing, movement through crowds etcetera. It can be utilized when in a vehicle, or while under the effect of another mover ability, necessitating he give verbal instructions if they are not the one driving the vehicle, which is less efficient.

The strength granted by this ability is nothing to write home about as far as brutes are concerned. Capable of sprinting at a top speed of 40mph. Jumping 40ft Vertically, and 40ft Horizontally. She can lift up to a ton, and can strike hard enough to dent steel/shatter concrete/break bone, limited by the durability of her own flesh.

Their wings only give gliding at best.

Useful for inhuman levels of contortion and acrobatics, Can fit into any entrance their skull can fit through.

Clothes can be shapeshifted with them, or ignored.

Fires a bolt of reddish/black energy. Hurts about as much as a paintball (even when you should otherwise not be able feel pain) goes through armors til it hits flesh. The blast itself doesn't actually deal physical damage. Range 100ft can fire bolts pretty quickly. wears off in a couple hours

Those afflicted begin experiencing fatigue, starting at 'got barely any sleep last night' with a couple of subsequent hits maxing out at "got no sleep last night, and ran a marathon"

Meanwhile Deadpan receives all the energy and 'awareness' that the others have lost, and generally feels super good and well-rested

Creates a holographic clone of themself that plays a specific message and/or gesture that loops, the message can be up to 6 seconds (or one round, whatever is longer) and can move as far as Deadpan could move in that time, able to appear like its using Deadpans other abilities (Throwing holographic bolts, or shapeshifting)

While the Holographic clone is active, Deadpan turns invisible, this invisibility can be seen through via infrared, thermal, and ultraviolet among others, but is invisible to the unaided eye

The hologram/invisibility can last a 30 seconds (or 5 rounds) whatever is longer, requiring a 12 seconds or (2 rounds) of cool down before using it again, during which time the invisibility fades.

Flesh as durable as Iron. Regenerates slowly over time. Clots blood quickly in minutes, but takes several days for flesh to mend itself to a pristine state. Boosted Immune System.

Once every 7 days the members of this cluster will be shunted into a dream room. While every member will be forced to enter, there is nothing preventing any member from simply leaving after the connection is established. Powers cannot be used in the dream room, and no actual changes to the real world can be made via actions inside the dream room.

The dream room resembles the vacation cabin that the the cluster triggered in, like a snapshot of their surrounding at the moment of their trigger, straying more than 10 feet from the outer-walls of the cabin is impossible, as what resembles a storm acts as a impassible barrier, glimpses of a hazy humanoid silhouette can occasionally be seen deep inside the storm, but this is simply a part of the scenery.

Ashton's heroes had pulled through, Plague Doctor's plot to eradicate the city had been thwarted, just in time to restore the people's faith in the local parahuman population. And like so many other people, one group of friends had chosen to celebrate.

Isabelle was the rock that held the group together, sure there were other friendships among the group, but Everyone had Isabelle in-common, and she was the right kind of person to deal with the various personalities when they clashed on occaision.

It also happened that Isabelle had relatively-wealthy relatives, the kind of relatives that had a holiday cabins in the mountains, despite only using it once every decade. And lucky for them Isabelle had somehow convinced her Aunt to let them spend a week there for 'We aren't dead' celebrations. A small road trip into the mountains later, and they were set to have a good time.

Food, Drinks, Board games, some old game consoles, and good company meant that thing were looking good. Although there were a number of cabins in this stretch of wilderness, Isabelle's Aunt had said the Properties were abandoned, which was fine, it meant they could be as loud as they wanted without complaints from the neighbors.

Things had gone well at first but all good things must come to an end. In the aftermath everyone could pinpoint when things had changed from a fun vacation to something entirely different. It had all started when the Weather had taken a turn for the worse.

Nightmares had plagued everyone's sleep. Things started subtly. The atmosphere had grown odd, filled with anxiety, and distrust. Old grievances that had been long buried and forgiven had come to the forefront of everyone's memory, feeling fresh and raw.

Personal belongings were misplaced and moved, and no one would take credit for snooping in eachothers belongings, only adding to the distrust. People would swear that they had heard the others whispering about them from the other room, but this would be denied. The wind and rain were a constant presence outside the large cabin.

Isabelle was suffering from near-constant nosebleeds, and others were getting headaches, this had initially been chalked up to the higher atmosphere up in the mountains.

One morning the presence of a skinned and flayed deer lying in a puddle of blood in the living room had changed things dramatically. The changes were more overt now. The weather was like a hurricane outside, and yet the cabin was intact, the power was functional, although the TV and radio were static, and the cell service was flopping between zero and one bar of service.

The hallucinations were more blatant, voices, howling, feelings of dread. Someone or something was tormenting them. Why? Had one of them done something, and simply dragged the whole group into this fate?

They couldn't escape, the likely hood of calling for help was slim with their cell service this spotty. Isabella had taken thing the worse. her eyes were frenzied, she said they deserved this. She was manic, this had the effect of actually calming the group, as they prioritized watching out for their mutual friend.

They took shifts to sleep, and the nightmares were worse than ever. Whatever limited sleep they had was shattered when They heard the front door open, the howling wind entering inside, as Isabelle stepped out into the maelstrom, only for her flesh to be flayed from her body by the unnatural wind and rain.

The form of the cape was now visible, The group trigger had stunned the killer, his power requiring concentration, and time to ramp up. The presence of five very traumatized, very angry new parahumans wanted retribution for the death of their friend, and the torment he'd caused them.. His fate was sealed.