This article is about the former hero known as Timeline. For a chronological list of world events, see Timeline.

Formerly the Protectorate hero Timeline, Atropos is a villain currently running with the Tribunal. Due to her rather short tenure as a hero as well as having moved out of town for awhile, not a huge amount is known about her. She has the power to create an impenetrable bubble of distorted time around her person. 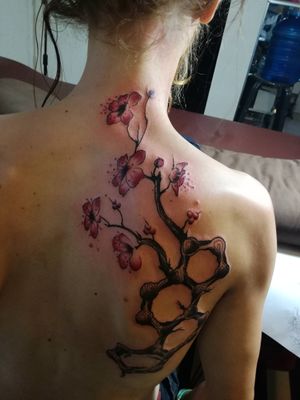 A taller woman, thinner, with hella long light-brown hair and blue eyes. She's got a tattoo on her upper back.

Her costume is a dress in grey-brown, with a hooded cloak that evokes the wings of an owl. She keeps a variety of tricks up her sleeves and in pockets, from a knife and taser to more mundane things like her phone. She wears no mask.

Outside of costume, she won't be seen without a bright sundress or cute skirt. Very self-conscious of her appearance, so everything about her is on point if she's going remotely anywhere outside.

As a member of the Protectorate, she wore a black armored bodysuit, with a red-lined black cape and a crimson domino mask. Confoam launchers were hidden in wrist bracers and she carried a PRT sidearm with rubber bullets. She also drove around a vintage Soviet-era motorcycle currently in the possession of Herald.

as Atropos (under Paracelsus) 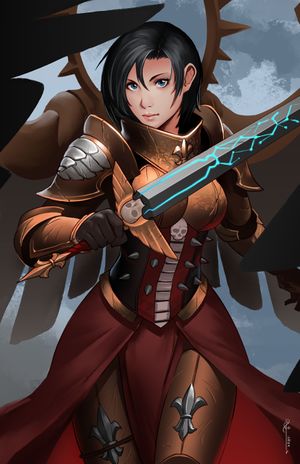 The first iteration of the villain Atropos

While she was mastered under the influence of Paracelsus, Atropos wore gold-and-red armor with an ornate owl-themed mask. She had a big fukken longsword and her Timeline confoam adapters had been modified to work with her new armor.

Prior to joining the Protectorate, Jen worked as a grey-hat hacker and programmer for various firms, and remains up-to-date in the art of fucking with shit using computers. She's okay with a gun and blade, fairly adept with explosives, and an Expert at repairing aging motorcycles.

The rage and hate she had once felt is gone now, replaced by a bitter taste and and a cold feeling. In a lot of ways she feels like things never changed, that she's stuck. Looking desperately to fill a hole that can't be filled.

Atropos has the ability to create an aura of time distortion around her. At her command, a spherical area with a radius of 20 feet, centered on her, will either speed up or slow down.

Atropos can make her distortion aura operate at any level between 10x faster and 10x slower. It takes effect immediately, and is uniform throughout the sphere.

The effect can last a maximum of five (outside) minutes, meaning she can spend up to fifty minutes inside the field.

Her power is limited in use, for every minute “cheated” (in either direction) she must spend a minute in “real time” before her power will work again. For example, if she spends one minute in her bubble, while five minutes pass outside, she will need to wait four minutes once the field ends before reusing it. In addition, if she is knocked out while her power is active, the field will turn off and time will return to normal.

Effects inside the field

The threshold where distorted time meets “real-time” is where the most interesting and noticeable effects are observable. The threshold itself appears as a faintly-shimmering barrier due to interactions with the atmosphere. It is invincible and unmovable, no matter may pass the threshold with the exception of teleporters (so long as a portal is not opened). Visible light and other electromagnetic radiation can pass through the field, however time dilation causes significant timing issues.

Her power is shard-calibrated to correct visible light back to its natural color. Radiation outside this spectrum is not corrected, resulting in severe redshifting and blueshifting of the radiation[1]. This means that any devices reliant upon signals, such as cell phones, will lose their service.

Data cables will not transmit data across the threshold, however for unknown reasons simple electricity will continue to work.

Finally, any living creatures caught on the threshold will be shunted to whatever side most of them is on.

[1] Someone could perhaps, based off of a known timing signal, construct a device to calibrate itself to that signal for use in offsetting the distortion.

Jen wasn't always Jen. At one point in time she was a gross boy. Then she decided to stop doing that, and started a long quest to become a cute girl instead. Except life, as life does, decided to fuck it all up. Her parents disowned her and kicked her out at 16, and thus she spent the next few years living on a billion different couches of assorted friends. Jobs here and there, and eventually she finally got her shit together and got a programming job. Things were great! Well, except for the fact that she hated herself, her life, and everything around her.

It was hard to remember exactly when the message arrived. They claimed powers in a bottle, a way to fix her. Jen disregarded it as a joke; rumors of a power-granting conspiracy had persisted almost as long as there were powers. Then another message, more serious. Then a woman appeared who looked like she could've been Jen's sister if she weren't an only child. The woman made an offer she couldn't refuse. But there was the matter of the price.

Jen was told to join the local Protectorate, and so she did, as the hero "Timeline". It wasn't that bad, anyway. Paid the bills, and decent health coverage. She'd never been one for the limelight though, and it was almost a relief when everything went horribly wrong. She was kidnapped and brainwashed by an insane preacher and cult leader, in what should have been a horrible fate.

But it wasn't horrible. He accepted her, the entire cult accepted her. For the first time in her life she'd had a family. She was well aware of the brainwashing, unlike some of them, but she didn't care. After all, she was never actually a hero, right? She'd only joined because she was told to. A month flew by, each day better than the last. But all good things but come to an end.

The siege. Power cut, capes storming their compound, followed by soldiers. Gunfire everywhere. Jen nearly died in the "rescue". Her master, her lover, though... he was dead.

The next months were a blur, a long recovery, tests to make sure the Master influence was gone, rehab for her injuries. In the back of her head, hidden under layers and layers of coping mechanisms, was anger. They'd killed her family, torn from her the only thing she valued... and they just expected her to get back to work? Fuck you.

Well, it's best not to get bogged down in the details, but one thing lead to another, and Jen faked her suicide (with the help of Zombi) and jumped ship. Now it's almost a year later, and after a stern word from the power-granting conspiracy, she's back in Ashton, but this time, it's not to play hero.