Seren Corbett first became a household name in the late-2000s when she flew the maiden voyage of the then brand-new Pathfinder vehicle to low earth orbit and then the Moon. She would later go on to serve two tours at Argo Station before returning to Earth to take part in Project Icebox—the first step to NASA’s Ganymede mission.

Following the Icebox disaster, she testified before a closed Congressional investigation, and briefly became the target of conspiracy theorists over what they believed the classified testimony contained.

Now discharged from the Space Force, Seren has returned to her hometown to find it—just like her—has been irrevocably changed by the touch of parahumanity. 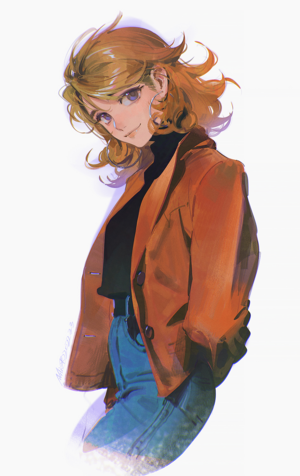 Seren is a woman in her mid-thirties, taller than average and quite fit. Outside of her breaker form, her costume is a dark grey flight suit with an accompanying full-face helmet.

In her breaker state, she appears as a shattered, indistinct figure in a spacesuit, almost like looking at a reflection in a broken mirror. The shards shift and move in random ways, making it difficult to tell where the figure ends and the surroundings begin.

Following her unfortunate trigger and subsequent disillusionment with regards to the Federal government, Seren’s leadership qualities have degraded somewhat, replaced with a burning desire to find the most thrilling and dangerous thing around and throw herself head-first into it regardless of the morality therein. However, she has retained some fraction of common sense, which is occasionally put to use if the situation calls for it.

Astrohaunt is a shaker/breaker focused on making the surrounding environment as hostile as possible. Her power is dichotomized into two states, the diffuse state and the contained state. Unless otherwise specified, Astrohaunt is immune to all her power’s hostile effects unless she chooses to be. Everything listed is scene-distance unless specified otherwise.

Outside her breaker form, her power is said to be in its contained state. In this form, the effects of her shaker power are more personally-focused, in some cases arguably acting more like a Striker power:

Activating her breaker form takes only a moment, as her body folds into itself and is replaced with a fractal shattered representation of a spacesuit-wearing figure. As this happens, the hostile environment of her power is fully unleashed, making her surroundings an exceedingly unpleasant place to be. Breaker state is tangible as standard for a human, visual distortions not withstanding. The effects of her contained state are reflected here, with the following additions within the scene-space:

For the random effects listed above (cold pockets, gravity, vacuum, and to an extent the pseudo-radiation effects) it is recommended that the poster use !choose to determine the outcomes, especially with situations that depend on a certain effect state (such as relying on low-gravity to lift a heavy thing).

While in her breaker-state, her mentality will tend to become slightly more manic, especially over longer durations.

Project Icebox, NASA’s simulation of a manned mission to Ganymede. For most people, it was the disaster of the week, before another tragedy claimed the consciousness of the nation. It would show up occasionally, on slow news days, as politicians used the deaths to blame the other party, but nobody really cared. For her, it was the moment everything had gone wrong. The day her entire life’s work fell to shambles around her.

The idea was simple at its core. All the infrastructure they’d use on Ganymede, locked in a specially-constructed chamber. NASA had brought Nucleus capes in from the very beginning, a cadre of Tinkers who were able to construct a perfect replica of the Jovian moon, from the crushing cold ice crust, to inhospitable radiation, reduced gravity, a thimble of atmosphere, and hours-long delays in communications with Earth. They’d live there for a year, and if all went well, she was slated to command the first manned mission.

Five months into the mission, it all went wrong. Systems failing, modules decompressing, components that had nothing to explode somehow blowing up… it was every single failure condition they’d thought of and more, happening all at once. She’d radioed a message outside, aborted the mission, ordered they turn off the machines and get them out. There was no response. Even the comms had failed.

98 minutes pass. The reactor had scrammed, backup power had failed, half the habitable space was vented, and most of the crew were dead. Her dosimeter had pegged, and based on the symptoms she had, radiation sickness had reduced her lifespan to a matter of days. All she could do was stay alive as long as possible, until help arrived to fix whatever anomaly had happened outside.

The console beeps, unexpected. She stumbles over, leaving a trail of blood and puke, her mind fogged by hypoxia. It takes her what feels like an eternity to hit the buttons, make the screen display the message, and—