Short-lived member of the Ashton Protectorate, before being transferred to the Devilfish Protectorate. It is known that she has a twin-sister named Powerplay, who has the same power as Takedown. Her sister is an Indie Hero, who also moved to Devilfish.

Violet is a little bit taller than average, with brown hair and eyes. In civvies she wears bright colors, favoring dresses, and frilled skirts. Her costume is your usual superhero bodysuit and domino mask combo, white with a blue-gold dazzle camouflage pattern. 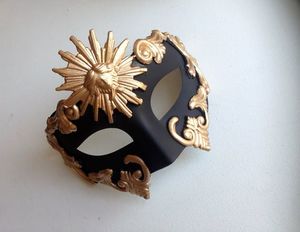 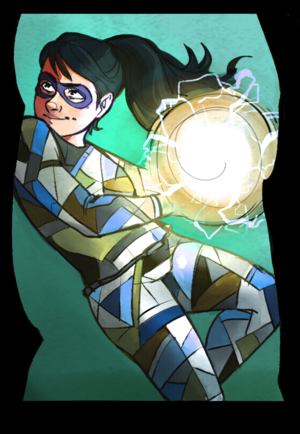 Takedown's costume prior to joining the Protectorate.

Violet is an extrovert the likes of which other lesser extroverts shy away from. She is painfully Optimistic, and naive in a way that usually makes her friends feel protective of her lest her innocence be swept away.

She is very fond of traditionally girly things, embracing femininity without hesitation, but has an infatuation with Jockish/Sporty boys, and Gothic/Punk girls.

In her alter-ego as Takedown, Violet is loud and boisterous, finding solace in anonymity to be unabashedly forward and open in a way that could easily embarrass her in her civilian life.

Violet lives with her sister (Heather), her bio-dad (Doug) and his husband (Randall). They have a modest home in the Blossom Heights neighborhood. Violet owns a 2001 bmw 5 series that she unfortunately has to share with Heather. Violet also has a Golden Retriever named Carly.

Takedown is a fairly straightforward flying brick style cape, with basic flight, a Brute effect, and a Blaster power.

Her Brute/Blaster side of things is where it gets interesting. Only one can be active at a time, and it’s not something she can switch rapidly or repeatedly (read: dont be a dick and turn on brute mode and then immediately laser and switch back. Y’know what I mean).

When her Brute power is active, any hits she takes are absorbed across the entirety of her body rather than just where she was hit. This applies to any damage taken, and does not reduce the force taken, only spread it out. It doesn’t change the type of damage either (ie bullets are spread out kinetic, lasers are spread out heat, banshees are spread out sonic, etc).

However, when she takes this damage an equal amount of force is put into her “tank” for use with her Blaster power, described here in a second. So if she gets hit with 500 points of laser damage, she now has 500 points in the tank.

When she toggles to her Blaster form, she of course loses that Brute ability and energy absorption, but it enables her to shoot golden-blue laser beams from her hands. She can make one beam a turn, which has the maximum force (mixed kinetic and thermal) of either a 9mm pistol shot or 10% of her tank’s energy, whichever is greater. She can of course dial it down to be nonlethal.

When Mom and Dad split, Heather was stuck with Mom, while Violet went with her Dad. Things were less pleasant without her sister, Violet had always taken comfort in Heather standing by her side.

Things weren’t perfect with Dad and his husband, but it was better than dealing with Mom. Heather was supposed to be able to visit every weekend, but that didn’t seem to happen often.

While Violet had only ever attended church with Grandma and Grandpa on holidays as a kid, she still said a prayer every so often for Heather. She wasn’t sure if Mom had gotten worse, but Violet knew it must still be rough.

Generally speaking Violet did well, and lived a relatively happy life. Dad’s husband had even started to seem like a parent in Violets eyes, it certainly seemed like Randall was trying his best.

When the Television and Radio had broadcasted the Plague Doctor’s speech, she’d been worried as most people seemed to be, but she was optimistic that the superheroes would handle it. The Quarantine was scary, but the heroes had never let her down so far.

About a week into the Quarantine, Violet woke from her sleep with a nightmare (trigger vision) that had shook her to her core, and yet.. She the memory of the dream slipped through her grasp like water. Leaving behind the feeling like something had changed, something important.

She spent the rest of the night unable to sleep, but that morning when her rather shrill alarm clock had gone off she’d jumped out of bed, having been a bundle of high strung nerves from the night before. And she’d found herself floating inches from her bed? She had powers? Was this what had changed?

Information on the internet was scarce, it seemed it was not a favorable topic, but the PRT website had references to Trauma being involved with the process of gaining powers.

She’d almost called the PRT Hotline immediately to discuss ward membership (as the website strongly suggested) but she’d hesitated. She had read a snippet months ago on PHO that hadn’t made much sense to her until now. The article had been about children of capes having an easier time getting powers.

Was someone in her family a parahuman? Was Dad? Mom? Could it be her grandparents? What about Heather? Was she the only one not in on it? She trusted her family, but she kept her new abilities to herself.

About a week later Heather had shown up on their doorstep, bruised from what Violet could only imagine was regular abuse, she looked like she’d been living on the streets?! How could this happen to her sister?! Heather had moved in with them, and Violet had been doing her best to make up for lost time with her sister (Between bouts of power testing, and the creation of her costume)

And she’d been watching her family closely, watching for signs of powers, when she finally found something suspicious, Heather had snuck out the second story window during the night, and there was a thorny rose bush beneath that window.. Had she flown? Teleported? It didn’t matter, she was just glad that she’d taken the time to make a spare costume. Her and Heather could be matching heroes! (The thought of Violet being a villain had never even crossed her mind.)