Pink Ranger was a somewhat popular cape in Nagasaki, Japan. Known to be rather useful for keeping heroes in shape, the Japanese goverment often had its wounded heroes sent to her to patch them up. She has attended several endbringer events. She later moved to Ashton, Washington and joined the Protectorate.

She is currently the Senior member of the Ashton Protectorate (which is known for its constantly changing Hero Roster) Having been on the Team for over a year and a half. She is a rather public and popular spokesperson for the Trans and LGBT community. She is known to be the Official Mentor of Quicksilver and is publicly Married to Rosebud as well as the adoptive mother of the popular case 53 Kendygar. 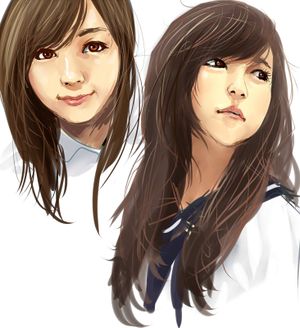 Kiki is at the peak of physical health and fitness, she has the body of an athlete, with a rather generous amount of Muscle tone. She is Mixed race, 50% Japanese, 50% Chinese. She has long healthy brown hair, and soft brown eyes. Despite her age of 25, she doesn't look like she's changed much since she was 18-19 (whether this is a side effect of her regenerative abilities, or just good genetics, has yet to be seen).

Kiki dresses in a Pink armoured Sentai uniform (A throwback to her roots as a former member of the Nagasaki Sentai Rangers) She was very clear when she joined the Protectorate that she'd have a large amount of say in how the PR team portrayed her Image. Her costume features an LGBT Pride flag patch on one arm, and a Transgender Pride flag on the other sleeve.

In her civilian life she almost always wears a variation of the following: A long pink skirt, Black stockings/thigh highs, A Pink leather Jacket, Assorted Vintage Band and Anime T-shirts, and High-heeled boots.

Kiki has a rather hefty salary from the Protectorate (and a completely unnessicary Medical/Dental plan).

She owns a rather nice jeep, and lives in a lovely suburban home with her Wife and children (Kendygar, and Yuki)