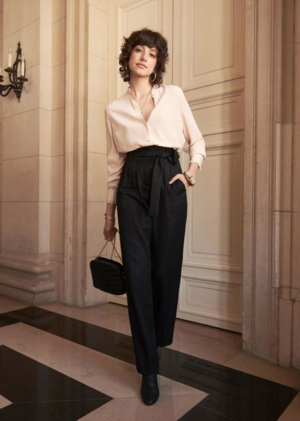 Maggie stands at 5’8, but with a nigh-perpetual glare that makes her seem like she’s 15 feet tall and looking down on others like insects that have inconvenienced her. She has a small and somewhat wiry frame, but is more toned than you might think underneath her sleek business casual.

Maggie has somewhat short, curly black hair, having cut the majority of her hair off to accommodate her new lifestyle wearing a tinkertech helmet.She wears little to nothing in the way of makeup, but has clear and healthy skin (beyond occasional dark spots under her eyes from long hours coding and tinkering)

As Magnum Opus, Maggie wears a high quality suit of armor, that resembles a vintage Cosmonaut suit, the suit itself is a mix of mundane material science, and bits of tinkertech. The suit features an Emerald/Gold gradient, with detail work in one of the two base colors. As well as a reflective black visor.

Provided with a Tinker lab by the Siberian Touchstone Foundation, located in their corporate team’s headquarters.

Bought a small but exceptionally nice home in town, fairly near the University campus, and drives a Hi-Vis yellow M3 Sedan

They have an office in the HQ where they can do coding for the game that had been so central to their trigger.

Magnolia is an extremely smart woman, prom queen and valedictorian in Highschool, she made top marks in college, and easily set herself apart from her peers as both a game developer and a creative lead. Undeniably a remarkable woman, she is also an unrepentant megalomaniac with a god-complex. She isn’t all bad, she’s just vicious, looking down on others unless they can prove themselves in her eyes, meeting a standard she sets for them in her head.

Throughout her life, she has been compared on several occasions by her co-workers and classmates as being a bit like Herbert West from the film ‘The Re-animator', something that when it trickled up the grapevine, she took as a compliment having watched the film in response to the gossip.

Magnolia is the kind of person who considers it an honor to hangout with her, and that anything she creates is something to marvel at.

As is typically characterized by a Liberty tinker, Magnum Opus’ power allows her to bypass any restrictions related to specialty, allowing her to tinker relatively unrestricted, in much the manner of a Free tinker.

Upon reaching approximately 70-90% completion in the building of a project, the shard cuts off Magnum Opus’ ability to finish the project, and the shard finishes the project itself over the couple days, usually 1-3 depending on the complexity of the project.

The Shard does this via a combination of tweaking physical properties, extra-dimensional connections, and sometimes mechanisms that it quietly slipped into the designs (typically without Magnum Opus’ awareness)

The end result always differs from the intended result that Magnum Opus sets out for, this is rarely ever straight-up worse than what he wanted, retaining the thematic function of a device, just designed and implemented through the lens of something alien.

META This will be played out by me (Magnum Opus) come up with an idea for a piece of tech, then present it to a group of players/staff (The shard) on the discord, and they suggest ways to twist and tweak the device into something similar but distinct, and I write up the equipment in accordance to those tweaks.

Maggie has worked hard to get where she is, lead developer and creative lead for a video game, that she believes to be her Masterpiece, even more so than any of the other projects she's worked on this is going to be her Mona Lisa.

Maggie's project has been in development hell for years, the ASSHOLES on Team C had produced another Flop, and corners have been cut yet again, manpower shifted, Maggie even being forced to work on the absolute rubbish projects of Team B and C.

But after so long of barely any progress, the Masterpiece is back on track, things look clear at last, her Masterpiece shall be completed according to schedule, recognition and appreciation of both her and her stunning project.

Then she received work that the company had been bought-out, and her and her team laid off entirely, apparently another larger studio had set its eyes on that abysmal fighting game series Team B had been so keen on.

Her work her Masterpiece, so close to completion, and yet again she is denied the recognition and appreciation that she so rightfully deserves.

Things are different now, Maggie has designs in her head, she's not stupid, she's clearly a parahuman, and that gives her options. After exploring her power she learns that her power is potent, but so infuriating to work with, why could her projects never turn out like they are meant too, denied the perfection in her minds eye.

She makes inquiries looking for work among the corporate sector, eventually she comes across one willing to hear out her rather odd terms, she has a helluva power, but the oddness of her terms had put off several of her prospective employers.

The request to purchase the rights and the data from the half-finished game from the studio that had made her trigger, that she may finish it herself, hell she would let the new company release it, she just NEEDS to finish this, compulsively drawn to complete what had broken her.

The company saw an opportunity to make money, and another leash to keep her on their side should she become discontent, after all she needs their cooperation to finish her masterpiece.

Agreeing, purchasing the game, and hiring her on, she becomes Magnum Opus, a fitting name, and in her spare time she alone, with no team to speak of, works on her Masterpiece, triple checking that her power isn't influencing it in the slightest. This would take a while... it hadn't exactly been going quickly when she had a team of 30 to pass the grunt work onto either.

Every one (1) second of real time is perceived as Fifteen (15) seconds in Bullet Time. Lasts for 3 rounds In-game

Slightly addictive (Closer to Liquor than Cocaine.) Gives a strong Cocaine-like high. With repeated uses in a row causing vivid Synesthesia, which lasts for hours afterwards.

Can be used as smelling salts. Comes in a variety of flavors and scents.

A nob allows them to determine depth, like seeing individual layers of an onion or something made of paper mache. Has a maximum depth of 69 feet from the surface of the Looking Glass. Can be adjusted easily in the field, within those parameters.

The Ice projectile is fired with the force/velocity/etc of a beanbag shotgun. while the exact shape and size of the projectile can be altered on the fly (if Magnum Opus) or using provided pre-programmed shapes (if Tabula Rasa) A sharpened projectile hits a lot like a crossbow bolt, though not as good against armor as a traditional bolt.

This gives the field absolute durability by making it somewhere between an unstoppable force, and an unmovable object. Does not conduct electricity,

This is quite power intensive, Requiring the user to replace the charge pack every 10 minutes, with 5 of the power cells provided. The cells can be recharged in the field by being slotted into Magnum Opus's suit.

A powerful gyroscope in the handle ensures it is not unwieldy for the user.

Can cut through armor and flesh far better than any mundane sword. And still functions as a perfectly capable and traditionally razor sharp sword even when the blade's edge is not active. Though when its active it 'bites' into the surface like a traditional chainsaw does, this can sometimes make it harder to dislodge quickly without turning it off first.

This edge vibrates air molecules in such a way that can be used to extend the reach of the sword's cutting edge by up to 6 inches.

The Vibro-Chainsword has maybe a couple hours of use, but can be charged in a wall outlet at a reasonable rate, or using MO's suit to charge Very quickly. A powerful gyroscope in the handle ensures it is not unwieldy for the user.

Inside the head is a hard-electricity emitter, capable of projecting a 12 ft razorsharp blade of solid electricity. the Blades sharpness and length can be adjusted with slightly recessed buttons on the haft. Striking an object with the blade imbues an electrical shock. At standard it has roughly double the voltage and amperage of a police taser, though this can also be scaled down via buttons.

The actual spear itself folds, at its smallest it is about 2ft (plus the 6inch head) and can be partially folded to 4ft, and then fully released to its 6ft length.