A relatively new member of the mob, has been seen acting as an enforcer in various parts of the territory. Little information available for now. 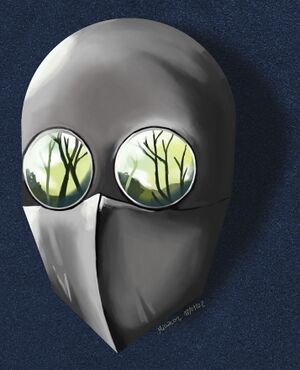 A rendition of his mask

Cape: A sleek steel full-face mask, mostly featureless but with mirrored lenses for the eyes. Lightweight body armor under a nice leather jacket, the sleeves cut off halfway to keep his gauntlets clear. Dark pants, belt with a sheath for his knife, and military boots.

As one of the powered members of the Mafia, he has quite a decent income. He lives in a nice house overlooking the lake, deep in Mafia territory, and has a cover job as security guard. Also owns a cat.

A generally nice guy. Cheerful, nice smile, pleasant voice, all that. Seems to keep his cheer no matter the circumstance. He's usually friendly and polite even to his enemies, making friendly chit-chat while actively kicking their teeth in. He is also theatrical, often making grand, sweeping gestures when using his powers, even though it's not necessary.

He may be nice, but he is not a *good* guy. He could be diagnosed as a sociopath, having little empathy, willing to do a lot to achieve whatever goals he has. He follows rules and regulations because of the mess that comes when you break them, but he *will* break them if given enough cause and excuse.

After the simulation he had trouble finding a purpose, he roamed the streets looking to fight and push himself because that's one of the few things he really enjoys. He joined the Mafia because it gave him exactly that: a purpose.

Mental issues ho! When he's in an intense fight and the adrenaline really gets pumping, he sometimes reverts to the instincts from the simulation. This is bad, because he had a superhuman body in there, and he may try to do things he's not physically capable of in the real world.

Flicker’s primary power is point-blank dynakinesis. He can control and transform energy within himself, and within an inch of his skin.

He transforms energy with almost 100% efficiency. He usually uses it to transform ambient heat and light into kinetic energy for himself, to move faster and hit harder, as well as causing his skin to seem to flicker and darken as a side effect. He can also use other sources of energy, even his own body heat as a last resort. Just using ambient energy under normal conditions, like light and heat, Flicker can generally punch hard enough to dent a car door and run at peak human speeds.

More esoteric uses of the power include:

The power is mostly tuned for offense, and isn’t as efficient or effective for defending against attacks by converting energy to other forms. Under general circumstances, in the time a single punch lands on him, he can transform roughly half of the energy in it. Something like a bullet moves too quickly for him to affect. In addition, this power generally can’t affect power-generated energy (from pyrokinetics, lasers, etc).

To support this power, he also has a minor Thinker sense allowing him to see the energy within things, although usually without enough clarity to actually do something with it besides making it harder for people to hide from him. It has a range of roughly 10 meters, and can partially see through solid surfaces (just enough to see what’s on the other side of a wall). He can see the energy in invisible people, but nothing in illusions.

Levi can overwrite small 'cuts' of objects with air, sending them to a pocket dimension. Effectively, he chooses a small (up to 20 cm across) spherical area of space within 10 meters of him, and turns any matter in it to air. He can use it on himself, but pretends he cannot.

He can tune the Manton-limit, choosing between cutting only living or non-living matter.

Overwritten parts are still connected to the rest of the object, so 'loose' parts won't fall off, and structural integrity isn't compromised. When the place something should occupy is occupied by something else when it returns, the most mobile of the two intersecting objects will be shunted to the nearest free space.

He tends not to use it on heads, to be a good sport.

More specifically it's a spectral copy/clone of himself, but he can never summon the complete copy, he can only summon up to half at a time.

The spectral limbs aren't especially durable, only taking a good hit to dissipate, but he can resummon them without much difficulty. This includes the recoil of hitting someone else. They don't have super strength either, they're just as strong as his normal body.

The copies look like 'hollow' versions of his limbs, visible around the edges but see-through in the middle.

He can channel his primary power through the copies as easily as through the rest of his body.

Within an area, Flicker causes people to lose the ability to identify things. He himself is immune to it, but anyone else will be unable to recognize more than, for example, "a person is swinging something at me". It could be anyone from Flicker to Phalanx, it could be anything from a club to a fish. People can still kinda distinguish shapes and sizes, structures generally will be recognized, and they won't mistake a baseball for a bat.

It spreads around him for 10 meters, within line of sight, and it may expand further to fill the room he is in (within reason).

After a minute of sustained use, he will get headaches, and his own immunity to the effect will start to break down.

The relation between the members of the VR Cluster is competitive: whenever they come across each other they will feel an intense drive to defeat (but not to kill) each other. It's not fully overwhelming and can be fought of, but this is very difficult.

The cluster members can also sense each other's presence in close proximity.

Levi followed an ad looking for testers for an "absolutely life-like gaming experience". Sadly this turned out to be a ruse by a Tinker specializing in simulations, who trapped him and pitted him against others in a high octane deathmatch-type-thing.

Eventually, something went wrong. As the simulation started glitching and breaking, the world literally falling apart around him, Levi Triggered. The glitches also caused three others to Trigger and break free, but sadly the Tinker who put them there got away before they did.

Levi was free again, but he had changed. After getting his powers, he went around making trouble and getting in fights for a while. Eventually, the Mafia heard about him, and sent someone to offer him a job, a purpose. He said yes.