Captain Comrade was rather famous in the Soviet Union. He was on the USSR’s first government sponsored Cape teams (not unlike America’s own Protectorate.)

It was not unheard of for Captain Comrade to appear on propaganda posters in Russia, and was featured often in the Soviet Unions own less-successful comic book industry, even making appearances in Non-soviet comics.

Comrade was less popular in America and Europe, but his distinct appearance made him stick out to non-Soviets, at least compared to many other Russian Capes. He was believed to have gone into retirement after the fall of the soviet union.

He has more recently been featured in several popular meme templates by modern pro-communist internet communities.

Comrade is noted to have been seen a number of times in the city of Ashton Washington, and many are wondering if this means that his retirement is over. 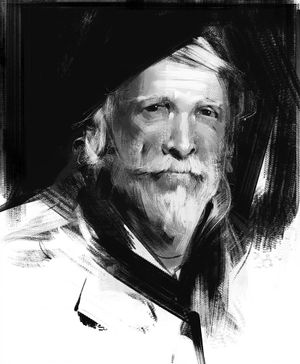 Boris Chernov in his regular form

Boris is an old man, plain and simple. He has aged gracefully, although he still carries the tell-tale signs of being past his prime. His face is wrinkled, with a beard as white as a Russian winter. He has dark brown eyes, and a surprisingly full head of white hair.

Boris has not been slacking on his fitness routine in his old age, and is about as fit as a man in his sixties can be. He has never been a tall man, and age has only seen him shrink a few inches, many of his grandchildren now stand taller than him.

Boris's Changer form is that of a metallic humanoid with glowing red eyes, and early in his career as a cape, he was mistaken for either a robot, or for someone wearing a unusually tight power armour.

Comrade has sported a number of different outfits and uniforms over his long career, but his old fall back has always been a stylized version of a 'Red Army' great-coat.

In his civilian attire, he prefers comfortable sweater vests and simple Khaki pants.

Possesses considerable Liquid assets, and a number of long term investments in Eastern Europe. In addition Boris has what amounts to a entire Tinker laboratory worth of Manufacturing equipment, although many of the machines are antiquated by todays standards he prefers doing things the old fashioned way.

Boris also has in his possession a veritable treasure trove of Soviet-era Memorabilia, along with a collection of extremely well-maintained Soviet weaponry: including a pair of well kept Makarov Pistols, a slightly-battered PPS submachine gun, a KS-23 Shotgun, and a Mosin-Nagant rifle (It is not unheard of for him to carry his Makarov's with him if he is nervous)

Comrade usually carries a number of Mundane items with him in both his day to day life, and on Patrols:

Comrade is an excellent marksman, having spent much of his career firing a variety of firearms, both mundane and of the tinker variety.

While perhaps a step-down in skill from his Marksmanship, Comrade is still respectable at sword fighting, standing his own against more experienced swordsmen, by absorbing hits with his durable changer form, and by utilizing his tinker-tech weapons to their fullest

Boris is also trained in unarmed close quarters combat, as a human he is a halfway decent figher, but while in his Changer form his fists are made of literal metal, and unless you've got a brute rating, he can almost certainly take a punch better than you.

Prior to Triggering Comrade worked in Research and Development for a Soviet weapons and technology firm, thus Boris has a Masters degree in both Mechanical, and Electrical engineering.

Boris is an old man, he has always been a bit gregarious in his youth, Old age and Hardship has not managed to take that from him.

He is an old school soviet Communist, he is not as biased against the United States of America as one might think, and is learning to tolerate American culture. His opinion of the Russian Federation is fairly low, generally considering them a piss-poor successor to his glorious Soviet Union

He had several rivals during his long life, but none have irked him as much as Herr Doktor. The desire to see this man defeated has driven him to come out of retirement.

His primary ability manifests as a tinker specialty relating Light. This is very useful for things like Lasers and hard light weaponry (or defenses). His specialty has room for expansion and experimentation into esoteric forms of Light (IE not 100% accurate to real light based physics) but Boris usually prefers to stick to classics like Laser guns, Hardlight swords.

His specialty is Mostly weapons featuring various kinds of Laser and Hard-light. Maybe armour that is highly resistant or reflective to light-based attacks. he can probably make some kick ass tinker tech light-bulbs/LEDs. he could probably make decent light-based sensors. but the majority of his tech would be various blaster weapons.

Boris can transform into a Metallic changer form, he superficially resembles a robot with glowing red eyes. This Changer form is not made of any known metal, but has a durability approximately on par with Steel.

Boris’s changer form does not gain any increase to mobility or flexibility (it stays about as swift and flexible as an older man slightly past his prime), although it maintains the same weight that Boris does in his human form.

Boris can ignore many wounds that would be fatal on a regular human, including removal of arms and legs, along with holes in his torso, that go all the way through (serious damage to the head is still lethal).

Damage to Boris’s changer form does not carry over to his human form, His Changer form can regenerate slowly (but only while he is in human form, he also cannot re-enter his changer form until it is fully healed, this process usually takes anywhere from a few hours for superficial damage to a few days for missing limbs.)