Nothing is known about her yet as she's yet to be on anyone's radar. 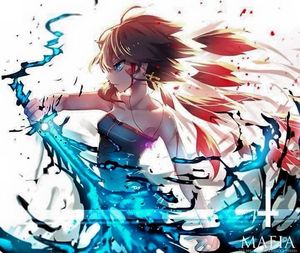 Physical Appearance: Rose is a pretty girl with brown eyes and reddish-brown hair, although sometimes she wears a white wig. She stands at 170cm (5'5"ft) tall, weighs 52kgs (115lbs) and is in amazing physical shape. She has a tanned, olive complexion, with some scars on her face from the harsh training her father put her through as a child. She can hide them with makeup if she chooses but she usually doesn't bother. She is proud of her budding abs and definition in her limbs. Sometimes she wears glasses for reading and just the general look of the glasses but her vision is good enough without them. When she uses her powers, her eyes become glowing blue and crackle with energy and her hair takes on a blue-ish hue.

Costume: Her current costume is basic clothes, a hooded trench coat that shadows her face and falls all the way to her calves. The trench coat is designed with only one full sleeve covering her left arm, while the other arm is sleeveless. Underneath the trench coat she wears a leather corset with the inside lined with some metal-mesh to help protect her from slashing attacks. She wears a basic domino mask over her eyes, a white wig and makeup covering up her scars, With the slight breaker effect of her glowing eyes, her face is very hard to distinguish when she is using her powers. She wears military cargo pants and combat boots. The costume is designed in such a way that it can easily be mistaken as a normal outfit if she doesn't draw too much attention to herself.

Rose can be a rather silly girl, who simply enjoys life. Rose is rather widely read and loves curling up with a good book. She is a bit naive and sees things only from her perspective and has not really learned that the part she sees is not always the whole story. She likes pranks, fighting and the color blue. She is highly intelligent and even when you feel like she isn't paying attention, you'll find that she heard it all and cataloged it for later use. Even while fighting other people she still stays light-hearted, although she is rather scared of Endbringers and Masters. The thought of gigantic behemoths of destruction that can destroy entire populations frightens her out of her beyond belief and Masters with their ability to control other people also really bother her as she doesn't want to lose her free will again. Since she's gotten out from under her fathers thumb she is determined to enjoy life to the fullest and is always out to try new things. Mention of her father however, brings out a rather dark side in the otherwise cheerful girl, which will usually lead to hours of exhaustive training. She has a high tolerance for pain and she tends to become quieter the angrier she gets. She has decided to spite her father by using the training he taught her to be a hero. She specifically likes doing things for free because it is the exact opposite of what her mercenary father would have wanted and expected of her.

Rose has a basic costume purchased from thrift shops and then redesigned by her, with some basic defensive protections she could add to it, such as a leather corset with wire mesh sown onto the inside form better protection.

Rose's skills all revolve around things her father thought would be useful to a mercenary, although with the obvious limitations of her being a teenage girl. She possesses the basics for a wide array of skills from combat to disguising herself and the lack of practical experience she has is being rapidly fixed as she makes her way in the world on her own. She is decent at fighting, although has little actual experience outside of fighting her father and even less experience with combining what she knows with her new powers. She has great outdoors skills, camping, hunting, foraging are all things she's well versed in. She is capable of traveling and hitchhiking; she was often dropped in a random location by her father and expected to find her way back home. She is decent with computers & electronics in general although she is nothing special in that regard.