The newest Ward to join the roster, had a brief initial stint as a villain but is now firmly on the Hero's team. Known to be a blaster with a number of interesting types of blasts. 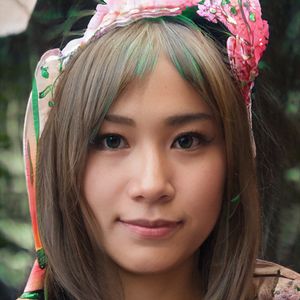 Trickshot out of costume

Teenaged girl, somewhat skinny, 5'8". Appears to be Asian in descent.

Current costume appears to be a glossy, stylish thing, modeled after a pool ball.

Playful, nice. Is a bit of a prankster. Does not like authority figures mostly. Loyal to a fault for those she really likes. Likes to crack jokes and puns, and tends to take serious situations and treat them non-seriously or without the gravity they might have as a coping mechanism for stress and the repressed strife about her being abandoned by her biological parents.

The user can generate a number of power-construct spheres, varying in color based on the user’s desire. They can have a maximum of 5 spheres manifested at once. In their base state, they float around the user harmlessly, in an orbit above around the user between 2 and 5 feet in radius, depending on the user's desire. The spheres have roughly the durability of a steel ball their size (That being roughly the size of a baseball), and are not affected by the effects of normal gravity or air resistance, though power-generated gravity or air resistance effects affect it as if it were a steel ball of its size. The user can, at any time, remove or put back the spheres from orbit around the user, or fire them from the orbit at a speed of roughly 40 meters a second or less (Average speed of a major league baseball pitcher). The user can decrease the maximum speed that a given orb can move at, but it’s maximum is 40 meters per second). When in orbit, the orbs can move at faster than 40 meters per second to maintain orbit. The orbs cannot exceed maximum speed- any attempt that forces them to do so fails. The user can only control maximum speed when they are in orbit or in contact with the user. The user can set their maximum speed to nothing, making them stand in place, though this does not make them invulnerable, simply unable to be moved. If an orb sustains damage that would crack or break a steel sphere, it immediately disappears into nothing.

If an orb is broken, or out of the orbit, the user can regain/recall the orb with a full round's concentration, and it pops back into place in her orbit. Orbs that exceed a 100 meter range from the user teleport back into the user's orbit, and the user can cause an orb to dissipate into nothing if they desire.

The orbs can be imbued with 2 of the following effects while they are in orbit or the user is touching them. The user and other orbs are immune to harmful effects caused by these effects. The orb is a specific color depending on the properties it has, if there are 2, the orb is the color of the user's choice between the two, or a mixture at the user's will.

Trickshot darts to the side past the man, pelting one of her orbs into his legs to knock him over. He reached for his gun, and pointed it in Trickshot's direction as he was knocked onto his back. Thinking quickly, one of her orbiting orbs forms into a shield-like shape in front of her, turning more transparent as it seemed to, and then slowing down to a crawl. The bullet rang out, and then when it touched the shield it suddenly slowed down greatly, clinking out the other side of the shield with minimal effect. She then pelted out another orb at the man's head, this time imbued with the tazing effect, knocking him out.

Standing over him, she exclaims, "You just got Tazed, BOOM!", and then walks off the scene after drawing her orbs back into orbit.

Zoey was a trouble child, going in and out of the various foster homes, never quite sticking to one place. She would often be a bit rebellious, and deeply enjoyed pranking her foster parents, especially if she disliked them. There were a few good apples- and the most recent one, a woman by the name of Monica Jones living in Devilfish, has effectively become her mother, they had grown so close. But still, Zoey was mischievous at heart. She decided to pull a very, very stupid prank. She dressed up in a fake makeshift costume, and walked into a store, pretending to be a supervillain.

Chaos ensued, customers trying to flee the store, and then something happens. It turns out some wannabe Serial Killer had set up a small car bomb across the street, and the noise and police approach had just set it off. The car exploded, not doing too much damage or killing anyone- but it framed Zoey now in a really bad, serious light. The police arrived to the scene, pointing weaponry at her as the protectorate was called about the incident. Trigger.

She was able to escape from the scenario with the makeshift use of her abilities, running away before any heroes could arrive, now labelled as the villain 'Trickshot'. Police would later conclude that the car bombing had been incidental, unrelated to the robbery going on nearby. Later on she would have a change of heart, and joined the local Wards, to become a hero.