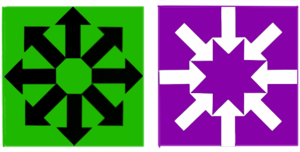 The twins are tall for their age at 5'1. Bree has a leaner, more muscular build and a slightly darker complexion from time spent outdoors playing sports, while Siobhan has a bit more baby fat and paler skin. Both are covered in freckles and have blue eyes and red hair. Bree keeps her hair short around her ears while Siobhan wears hers in a long braid to her waist. Bree prefers to wear practical, comfortable clothing like shorts and T-shirts, while Siobhan likes more elegantly designed dresses and button-up blouses.

In costume, Bree wears a bright green hooded shirt with black arrows radiating out from a center point on her chest, while Siobhan wears a dark purple hooded shirt with white arrows pointing in towards that point. The hoods are usually pulled up to hide their hair, and they both wear simple medical masks to cover their faces.

Bree has been in martial arts since she was five, with a red belt in Taekwondo and a second class brown belt in Judo. Siobhan is good at researching, categorizing, prioritizing, and strategy.

Both speak a smattering of Scots-Gaelic, understand a bit more than that, and are conversational in Spanish.

Breeana is outgoing and easily excitable, always ready to try new things and tackle problems head on. She makes friends easily and loves to be the center of attention. She has a bit of a martyr complex, preferring to put herself into danger rather than have anyone else do it. She is also aggressive in any competition, be it sports, board games, or cape fights. She'll rush headlong in and throw punches until someone goes down.

By contrast, Siobhan is withdrawn and a bit cold. She prefers familiar comforts to new experiences. She does not particularly like people and tries to hide away in crowds or during family reunions and the like. While Bree is a natural born hero who's ready to leap into danger, Siobhan is more practical and would rather avoid risk where she can. She plays the defensive game in any endeavor she undertakes with a keen eye for strategizing and taking her time.

The twins have mid-ranged telekinesis that manifests itself in a telekinetic orbit around them.

Siobhan (Flow) is able to pull objects from an area about the length of a basketball court and cause them to orbit around her. She may also halt an object's rotation and hold it in place as a shield. The orbit's minimum distance is a few inches from her body, and its maximum distance is about ten feet.

She is able to pull objects that are being held, carried, or worn by people, including clothing and armor, which can be utilized to move people around, though it's fairly weak due to Manton limits.

She is also able to move objects without pulling them into the field. Objects move at a moderate speed while she is controlling them. The force of this telekinesis can overcome forces of 1.5 tons (since that's what's needed to pick up the average sedan.)

Bree (Ebb) is capable of repelling objects from the field, sending them hurtling away at high speeds. She can do this by either selecting an object and repelling it as-is, or designating a spot in the orbit for a specific object to fly from when it hits that spot. She can also pull objects into the field from up to ten feet away. She can use a telekinetic burst to knock objects out of people's hands at close range, but can't affect clothing due to a stricter Manton Limit.

The objects are unaffected by gravity and other outside influences while in the field. Items launched from the field travel up to 100 MPH, at Ebb's discretion.

The smallest object they are capable of picking up is a grain of sand, and the largest is something the size of a sedan. There is no cap on how many objects of any size can be in orbit other than what will fit in the roughly ten feet around them. Both solids and liquids can be utilized.

The telekinesis allows them to fly. Ebb is able to fly 100 MPH, but can't turn while flying, and has to come to a gradual stop to change directions. Flow flies only 20 MPH, but is capable of making sharp stops and turns as needed.

Breeana and Siobhan Hardy lived in Miami, Florida with their family. Though they were very different, they still were close to one another. While walking home from school one day (Bree having stayed late for sports while Siobhan stayed late at the library), a freak storm blew in out of nowhere. They were quickly soaked. While they ran for cover, the wind picked up, and a nearby picket fence was blown apart. Bree grabbed her sister to try and tug her out of the way, and they both triggered as they realized they were going to be impaled.

They did a bit of heroics in the area but had trouble breaking onto the scene without joining the Wards. Not too long after, they moved to Minnesota when their dad got a job offer better than anything he'd get in Florida.