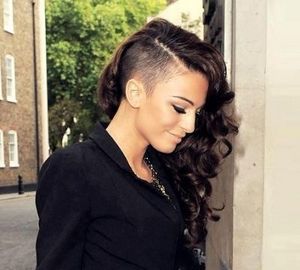 Sabah in her civilian Identity.

Attractive, slim, slender, and graceful, Sabah could (coincidentally) be described as 'sylphlike'. She is of average height, has dark hair, and stunning grey eyes.

In her cape identity as Sylph, Sabah wears a distinctive tinkertech suit.

Sylph carries a compact first aid kit, a combat knife, and a small repair kit on her person.

Besides a small apartment situated just a little bit away from AshtonU, she has few resources available to her, not only is she in debt from university, but after acquiring powers she spent all the money she had saved to create her equipment.

A quick learner, she also has excellent kinesthetic sense and balance, situational awareness, and intuition. She's partway through a degree in Parahuman Studies.

Driven, focused, and headstrong. Sabah typically carries herself with confidence and poise. She has OCD tendencies, which strongly bleeds into a perfectionistic streak mired with equal amounts of personal issues dealing with feeling 'in control'. All this makes her a little self-conscious, feeling the need to always be seen at her best. As a perfectionist, these tendencies are often seen in her work too, whether it be schoolwork, or tinkering, or anything else. Often, it hinders her from finishing projects she feels she can't complete to the absolute best of her ability, but other times it aids her in excelling in her tasks.

Tinker specializing in telekinesis. All of Sabah's equipment is capable of being moved telekinetically by her.

Sabah's parents arrived in America as refugees from an Endbringer attack on Istanbul, Turkey. They were the last surviving members of her family. So, when Sabah was born, she was precious to them, and them right back unto her. It was here, in Ashton, that Sabah was born and raised, and here, in Ashton, that her parents were murdered. There was nothing special about it, nothing spectacular, just two more unfortunate casualties in a random skirmish between Villains and Heroes. It was forgotten as quickly as it happened by most. But not for Sabah...

Even through the pain and sorrow of losing the only family she knew, Sabah never triggered. She had no one to blame, and at the same time she had everyone to blame. The Villains ultimately escaped, and the Heroes certainly didn't take the rap for the casualties at hand. Enraged with the unfairness of the world, she desperately sought out ways to take to the field herself and do things right. But her search brought up only dead ends and ghost stories of secret organizations that were outlandish nonsense at worst, and mere conspiracies at best. She'd even switched her program of study in an attempt to learn more about the enigmatic nature of capes. This is when she was approached by The Coven, who offered her a paradoxical deal: The gift of a power so she would no longer be helpless in the face of injustice, but at the cost of her free will, in a roundabout way. Further caveats of the agreement stipulated that Sabah would take the name Sylph, and that if anyone were to speak her full name, Sabah Avci, then she would be compelled to follow their command. The allusion to fey, and how they would guard their true names in folklore was not lost on Sabah as the deal was christened by the sudden and painful appearance of a Nauthiz rune tattooed over her heart.