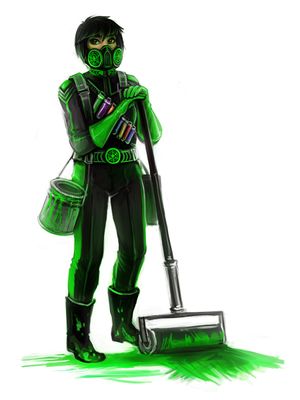 Starving Artist with her buckets and paint roller

She looks like she's 16 or 17, all of five foot nothing. Short black hair with NEON GREEN highlights, and mocha-colored eyes. Her costume is a black and NEON GREEN bodysuit, with a respirator for a mask.

She can throw a vial like no one's business. A very talented creative person in general, and enjoys making everything from sculptures to tattoos when she's not drugging it up.

Her passion is her art. Everything she does in some way boils down to furthering it and spreading it amongst those who would benefit from it. Unfortunately, she has a rather warped reality on what constitutes "helping" someone, and absolutely no thinking of the larger-scale implications of what she does. She sees a problem, determines if her art would help solve literally that problem, and implements it at once. It doesn't help that she is very addicted to her own brew.

Starving Artist is a tinker with a secondary thinker power. Her Tinker power is, quite simply, the power to create chemical substances that can do a variety of effects. Her Thinker power is the ability to design large-scale factories and devices for the production of (conventional) chemicals.

Starving Artist's unused maintenance hours are converted into points of chemical "use" per event[1], unless she refills her components at either her car, home, or another such sufficiently-stocked location. Unless otherwise noted, she cannot make and/or use multiple chems in a single turn of combat. Chems that perform opposite effects (such as Wake Up! and Don't Wake Up!) cancel each other out.

Her Thinker power does not allow her to make Tinker chemicals. It does, however, allow her to use (conventional) devices to find novel ways of synthesizing large amounts of chemicals. Given enough base materials, in her lab(s) she can produce about a kilogram of cocaine in 24 hours.

[1] For example, if she has six hours of maintenance, she can use eighteen points of the stuff below.

(Asterisks* indicate that there's some special usage condition with this chem. See description for more info)