Soulstab is a selfish villain who has been involved in a few small robberies. She has no qualms in hurting about hurting civilians with her power, but as her power is completely nonlethal and has no lasting effects it's not cause for a kill order. Her power allows her to render people unconscious with attacks from her swords, and the swords seem to go through matter. 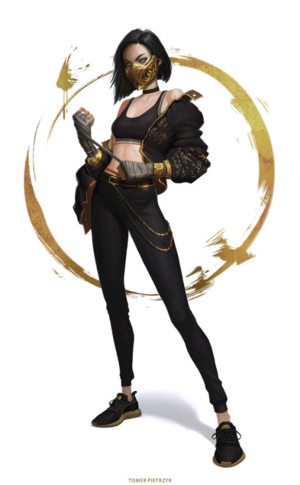 Mina Cromwell in Costume, minus her swords.

Golden face mask with a short top and tight pants, along with a sweater which usually hangs loose off of her.

Mina is a brat, through and through. She is the youngest child of a rich family, and was spoiled rotten as a result. She thinks her actions have no consequences, which is only reinforced by her power's nonlethal quality. She'll attack at a perceived insult and throw temper tantrums like you wouldn't believe.

Main Power: Bladed weapons she’s holding or has on her person go through any matter that’s not part of a sentient being as if it weren’t there. Matter that is apart of a sentient being is struck as normal, and will pass through as if the sword was hitting material of that kind. For example, if it was normal flesh it would cut through easily, but if she’s attacking a man made of steel it’d be just as hard to hit as steel.

However, damage from the bladed weapons does not appear on the body. Instead, it inflicts mental damage. The amount of mental damage is based on how severe the wound is. A small cut might be a slight twinge in the mind or a mild headache, while losing a limb would cause a migraine. Any damage that would be fatal within a few seconds would cause unconsciousness, and mental damage would accumulate until unconsciousness occurs (You’d typically become unconscious after enough damage is done to kill you.) Damage fades over time and will generally be gone after an hour passes. Similarly, someone knocked out will return to consciousness after an hour.

Here’s the damage levels and their effects:

Subject falls unconscious within a second, only having enough time to cushion their own fall. No pain is caused at this stage, and the pain of previous stages disappears once this threshold is reached.

Subject falls unconscious within a second, only having enough time to cushion their own fall. No pain is caused at this stage, and the pain of previous stages disappears once this threshold is reached.

The amount of damage needed to knock someone out differs from person to person, so someone with more mental fortitude (Like most heroes) might take more damage to knock out, while a civilian would possibly be easier.

Chart of what kind of people can take what type of damage:

Damage that would normally be instantly fatal (Such as a decapitation or a slice through the brain) always instantly results in a knock out.

Damage taken is also affected by other things such as mental state (The more unstable the more damage) and emotion (If you’re angry and unfocused you’d take more damage, if you’re super focused and have a clear head you’d take less.) The damage isn’t a fixed amount and this sheet is just a guideline, actual effects should be worked out between the players or by a staff member if there’s a disagreement.

Damage that’d be instantly fatal would still be an instant KO, regardless of mental durability.

Mina takes no damage from her power, and it still causes no wounds to her, meaning she can stab herself without issue.

Power from Fortify aspect: Minor increase in durability and endurance. She has around 25% more durability then your average human, and could hard-run for a mile before she even started to get winded.

Power from Forcefield aspect: Can create somewhat fragile forcefields (Will break from a normal punch, but able to hold off anything less then that).

The maximum size of these force-fields is a four foot square, but can be any other size or pattern that fits within those dimensions. The field is as thin as a piece of paper. The cooldown for making them is three seconds, and only one can be active at a time. The field is light blue and is about as transparent as normal glass. The forcefields can be placed at a range of touch, and will float in the air where they were placed.

Power from Psychotic aspect: Instead of dealing psychic damage, the damage from bladed weapons cause those hit to become increasingly intoxicated. When channeling this power she has a green, hazy aura around her and her blade.

Power from Telekinesis aspect: Bladed weapons on Mina’s person are 25% lighter, making them easier to wield and carry aroun

Power from Gladius: Can project two small daggers somewhere on her body. The daggers have the standard soul-stab effect. If they lose contact with her body at any point they disapear and have to be remanifested.

Mina is the spoiled youngest child of five in an old British family, the Cromwells. The Cromwells have a long and storied history, starting from Oliver Cromwell 17th century, and culminating with her father, the hero Lord Protector.

Despite his history as a prestigious hero, Mina’s father was not a good parent. He was distant, uncaring, and neglectful. She was basically given free reign to do what she wanted, with a large amount of funds allocated to her to keep her occupied. The only real parental figure she had was her stepmother, who came into her life when she was 9 years old, only a few months after the death of her actual mother. Mina was extremely rebellious with her stepmother, refusing to cooperate on even the tiniest of things.

The only thing that Mina really did that was in line with her father’s expectations of her was training with bladed weapons. Partially because she, deep down, wanted her father to praise her for once. Partially because she enjoyed stabbing things. She did quite well with her sword practice, learning at a rate high enough to be called a prodigy. By the age of 19, she was at the level of people twice her age, with enough skill for her to be called a master.

Mina also dabbled in knife throwing, even though it wasn’t officially sanctioned by her father. She enjoyed the idea of stabbing things at a range.

Despite her skill in the blade, her father was never interested in her. It was something that built a huge amount of resentment in her. She was never good enough to warrant attention from the great Lord Protector. The resentment caused her to act out even more, which caused her father to be even more distant. It was a negative feedback loop that caused their already tumultuous relationship to crumble.

Eventually, her father grew tired of her and her siblings, all but one of whom had evil inclinations (In his eyes.) They were sent to a summer home, a mansion in Washington near the city of Ashton. Mina was reluctant to leave her home country, but her father promised to include her in the will if she went, and remove her if she didn't. Mina wasn't sure how she would live her life without the wealth she had become so accustomed to.

Life in Ashton was not the most fun for Mina, but it was tolerable. She experienced what night life the city had, it wasn't as fun as London but it was something. She also started up a collection of swords, with the centerpiece being a huge seven and a half foot monstrosity that she had custom-made. She could barely even lift it, but it looked cool as hell. Expensive as hell too, but that was her father's money, so she didn't really care.

Everything changed after her father died. It wasn't the death itself that affected her, per se, rather the consequences his will reading had on her and her family.

It was no secret that her father didn't care much about her or her siblings, Nathaniel excluded, but his will still caught them by surprise.

After the reveal, everything went to shit. It was stressful. People were screaming. Someone stabbed Nathaniel. Blood. So much blood. And then, feeling good. So good. Nothing was stressful, everyone was feeling good. Things were great. She didn't remember much after that, only waking up afterwards. She had a huge sword by her side, was half naked, and was surrounded by her siblings, sans Nathaniel. Her stepmother was there as well, and all of them were in various states of undress. Things had gone towards the weird, and things would only get weirder in the cape life of the newly triggered Soulstab.