She hasn’t fully made a name for herself with her mercenary work ,but she is a familiar entity in the space. Her true claim to fame is her trigger event which was national news due to the scale of severity of it. A collection of teens and kids were kidnapped by a cape and were forced to play saw-like games for their survival within a tinker-tech dungeon. Out of the twelve kids kidnapped only three survived including her, a ninth grader, and another senior.

Due to being picked up by the PRT after her trigger event, there is limited information on her ability which simply says that she is able to change the appearance of a person to herself. 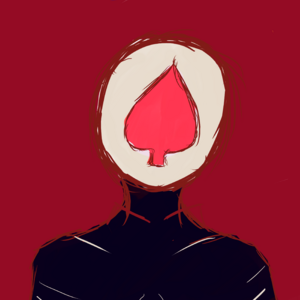 Cleo is an African and Korean American woman with black long hair that hangs down to the middle of her back. However, she normally keeps her hair pinned up in a ponytail. Her eyes are a dark brown ,and her skin is light caramel brown. She stands around 5’5” and has a lean build due to the athletic training she went through. On her left shoulder there is a tattoo of an indigo snake with a white turtle shell and the snake head extends out to the base of her neck.

Her costume consists of a custom-made white motorcycle helmet whose lens takes up the face of the mask and is shaped like a spade. Alongside that she wears a sleek black suit with ridged paddings on the upper arms, forearms, abdomen, and side of the thighs. She wears combat boots and gloves which are also white. At her waist are pouches which contain her equipment.

Cleo is always at odds with who she is and who she was. She was a caring young girl who did her best to help those around her ,but she was taken advantage of because of that kindness. So now she tries to think of herself only ,but finds herself slipping back into her selfless nature. She wants to find a middle ground but she refuses to let herself be taken advantage of again after her trigger event.

She is naturally introverted which is a side of her that she tries to fight back as to not be who she was ,but she has her limits on social interactions. This is why her more planner side comes to show as she has her entire life scheduled down from her morning walks to her weekly break ins.

Before she had powers, she would always put her own ambitions and goals to the side to help others. Now she is inclined to pursue herself and her own growth which has helped her confidence. Now that she has powers her confidence shows its head a lot more often. She wants to be remembered for who she is and the things she has done even if it's under a different identity or for not so good causes. She does this out of a sense of duty to the scared little girl fighting for her life, fighting for one more chance to change.

Solitaire is a stranger in its purest state. Her power allows her to replicate all physical information of herself and place it on any object or person that she is touching.

The way this works is that upon touching ,say a bookshelf, the bookshelf will register as her by all senses and even by cameras or sensors. This effect does have its limits as even though it appears like her in all ways, it doesn’t respond to outside influence. So you could stab it and it sure would feel like stabbing a person ,but remain in the state that it was in when the power was first used on it. This also has a size limit with the smallest thing she could affect would be a German Shepherd and the biggest being a 2019 Harley Davis Electra Glide motorcycle.

Due to her trigger her power has a slight trump flavor with it even being able to trick powers and tinker tech.

Cleo grew up in a household built on tradition and history that her Haitian mother and Korean father wanted to pass down to her. It was always the folk stories and legends that captured her attention as it made her think of the capes who populated her city of New Orleans. This is in part why she was so kind and giving at a young age. She wanted to be like the god-like figures who helped guide people who needed help and punished those who hurt others. So she would put others before herself and do all she could do to help others even if it may not be the best for her. This brought her friends, but it also brought those who would use and take advantage of her kindness for their own gain. She was hurt many times ,but she didn’t want to stop being a source of good because someone did her wrong.

It was a hot night in May of her senior year of high school when she awoke in this humid building with twelve other kids from her school. She was familiar with all of them and some were even her friends. However, everyone's attention was immediately taken to the wall as a taped speaker began to play a distorted voice.

“You all have been chosen for a better tomorrow ,but you can’t see the dawn unless you survive the night. So let's have the welcoming ceremony.”

The emotions in the room were mixed with fear, anticipation, and malice. Some kids tried to find a way out but were cut short by the sounds of beasts when they neared an exit. She was terrified but she and the other knew they would have to play if they wanted to make it back home.

Soon they found they were all marked with a brand on their neck which grouped them in teams of four. She went to her group with some of her friends from school. This gave her a sense of safety that maybe the old gods were on her side tonight. Their game is set in a dimly lit room about the size of a baseball court with random debris scattered among the place. Their goal was to escape from the beast that was released in this maze ,however; each of them were marked with a number which was the order that the beast would hunt them down. They checked their numbers immediately to see that Cleo was marked first. They all looked between each other ,and Cleo proposed that they would travel together since if they knew where Cleo was they would know where the creature was heading and they would trap it in a tight area then make a run for the exit. They all agreed to the plan and they began to navigate through looking for an area where they could trap the beast and they finally found one which had a bunch of bikes and trash packed together with a small exit.

However; one of her friends kicked her into the gap causing a loud noise and they screamed, alerting the creature to their location. The group in that moment ran from her using her as bait for the reaction while they made a run for the exit. She went into full panic as she watched them leave her ,and the sound of the heavy galloping of the beast getting louder sent her over.