A very on-again off-again local villain, who robs a gas station maybe once a month. Lately she's been making something of a name for herself, robbing bigger and bigger things. Her merch has been popping up all over, and she's been in a few high-profile situations.

In a period of months, she engaged in a series of escalating robberies, all highly-publicized (such as robbing a major football game during halftime). The most severe of these, robbing the PRTHQ gift shop, resulted in her arrest.

In her civilian identity, Charlotte Schmidt is the Parahuman Affairs correspondent for the university newspaper, the Ashton Herald. She's recently risen in prominence for her investigative work with regards to the disappearance of Heather Donahue and the murder of her parents. 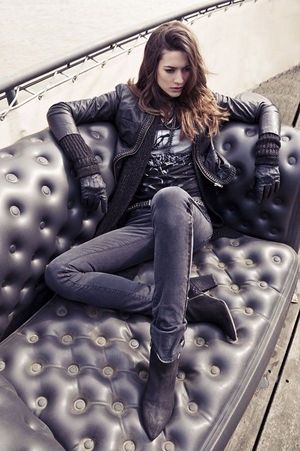 Charlotte Schmidt, totally not a cape

SKULLFUCKER's costume is... something. She wears a black two-piece bikini with fake Halloween decoration skulls covering her boobage. A third skull (installed backwards, because she is a classy lady) is placed in her crotchal zone. Besides that, she's got black thighhighs, step-on-me boots, and a practical utility belt that disguises nothing.

Instead of a mask, she covers her face in a white chalky facepaint, save for a horizontal stripe on her eyes which is in black. Her black hair has more of the chalky stuff run through it to disguise the color. Emerald eyes.

Charlotte is going to school at Ashton U, but lives off-campus in an okay home with all her friends (she lives by herself with two cats and an internet connection). A decent car, and a monthly transit pass. Part-time job in the university print shop. On her costume, she typically carries:

Surprisingly given her name, Skullfucker is a pretty happy-go-lucky person, and tends to have a smile on her face even in the midst of performing a gas station robbery. She doesn't seem to take her villainy very seriously.