People may have encountered him in his monstrous form, and he may have hurt or killed someone, but his memories of the first weeks after his trigger are blurry and unclear. They probably won’t recognize him now. 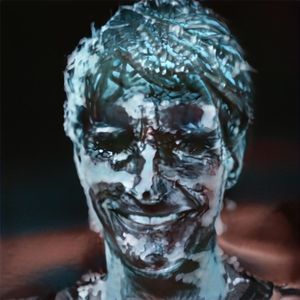 He usually wears casual clothes, a shirt, and some shorts. Though he often changes it, depending on what he thinks others would like, but he has no sense of fashion. He himself does not really care about his outfit very much.

Because of convenience, his clothes are often made from his own body mass, making them part of his body, which he can easily modify or just absorb back into him. He has short or medium length, brown hair, and green eyes.

As a Hero, he wears a grey body suit and gloved hands, his eyes are covered with some googles the lower half of his face visible. He also seems to be more muscular than his civilian identity. Just like anything he wears, the ‘costume’ is part of his body, which is why it changes with his shapeshifting.

His size and weight vary widely, but most of the time he is 1.80 tall with a slim build. When he's eaten a lot, he can appear fat and significantly larger, but he tries to avoid that. Trying to blend in without looking to freakish.

He pretends to be human, but his appearance is only artificial, he uses his changer power to resemble a form close to his previous self, though this takes some concentration and his facade, may crumble if he gets distracted or loses consciousness.

His true form is a pulsating, slimy, blob-like being, constantly moving and changing without anything resembling a human.

He has a smartphone, otherwise he uses his power to create tools, if he needs some.

He is still on the way to figure out how his ability works; he needed a lot of practice to be able to appear human again.

Besides that, he has some know how about anatomy, medicine, powers, and a bunch of ‘useless knowledge’ about all kinds of strange topics.

He appears to be very cheerful and optimistic. If there is something that sparks his interest, he tends to talk a lot, even if people are not as much interested in it as he is. He is very curious and likes to experiment, to discover and to enjoy himself as much as possible. Often by uses of his powers for his own fun or to entertain others and if he got a new idea there isn’t much one can do to prevent him from testing it out right now immediately.

He tends to rush things without thinking it through but can also be very observant and thoughtful, revealing that he is smarter than he lets on.

He has an interest in biology, specifically weird critters, molds, fungi, bugs and other unusual stuff. He is also a power nerd.

Behind all of this, lies a lonely person with many insecurities, identity issues and facades. He does not know who he wants to be or what he wants and is afraid of how others view him, maybe something is wrong with his appearance? Or it is just his personality that is annoying? Even if people do seem to like him, he is always unsure if they like his ‘real him’ or just the person he pretends to be.

He often takes critic badly or personal and will try to remove himself from such a situation, avoiding people he thinks will dislike him. It does not help that he also lacks many social skills, which makes it hard for him to figure out what his peers might think.

If he takes too much damage and loses some of his mental capacity, he seems more unhinged, resentful, and aggressive, in this state he is much more likely to rush into a fight and kill, maim, or even swallow his enemies.

Shapeless is mainly a Changer with some Brute and Mover characteristics.

His body got permanently altered into a slime and gel-like mass. He can control and change its state, make it more liquid so he can move through any gap, or become though and rubber-like. His unique physiology has no conventional organs or specific weak points, but he is susceptible to heat, radiation, acids, some poisons, and anything that causes damage on a cellular level.

If he takes damage, he loses the affected mass of his body, which can be restored by absorbing and digesting bio-matter. This also allows him to grow above his initial size, he can increase his mass up to 3 tons. If he reaches that mass and continuous to consume biomass, parts of him would die and he would leave a trail of slime and hardened wax-like matter.

Though bio-matter digestion is relatively slow, he needs at least an hour to double his size.

If his mass falls below his original amount, he will lose parts of himself, his personality, consciousness, etc... and he would act more primal, savage and conflict seeking. Similarly, if he grows too much, his shard will start to enforce more influence. If his mass falls below 2 kg his body wont be able to sustain itself and die.

He can feel out texture, shape, and other properties like the molecular composition on the surface of something by touch, it allows him to detect specific substances or mimic the properties of something to a certain degree.

He can mimic most bio-polymers, but not anything inorganic.

He can use his shapeshifting to create tools/objects, by just severing them from his body, those parts would die and keep their shape.

If he loses consciousness or sleeps, his shard will get control over his body.

To change into a specific form and keep that shape, he needs to imagine it, with every detail and aspect of it, otherwise his form would lack those parts.

His physical strength is usually below average, unless he specifically reinforces his form to be tougher than usual, but this limits his flexibility.

He can harden parts of his body mass, to create armor or shields, but this usually kills those parts and he can’t change them anymore unless he reabsorbs them like any bio matter he digests.

Normally, parts that get separated from his main body die, but they could stay alive and act on their own, mostly driven by the instinct to reconnect with each other. He could give them some imperatives, but besides this he has not much control over them, they default to their original blob/slime like shape and do not have much of a mind on their own, besides his shard which could influence their actions.

Max had a happy childhood, or at least his earlier years were like this. His parents loved him, he had a bunch of friends and he could follow his interests without considering what others might think. But nothing stays the same, his childhood friends distanced themselves, they cut contact one after the other, his parents alienated from each other until they divorced and Max, he stayed the same, or maybe not?

He had a hard time to tell why, but he knows it must be him. He either didn’t manage to keep up with those trends and expectations, or people consider him weird when he does something new.

Because of his dad’s job, they moved very often, almost every year. A new city, neighborhood, and a new school…. He got used to it and at least every new start presents a opportunity to try out a new persona, a better Max, one that people like and appreciate. This is what gives him hope, people can change, he can change, he got over his self-mutilations and tries to be more positive.

Though it turned out, this new start was not as good as he expected it to be, he somehow fucked up… again...

He tried to befriend the wrong people, pretending to be someone he really isn’t and got pulled into some dubious shit.

From one moment to another he was on the run. With the vial in his pocket, he fled into the streets.

Of course, they followed him, and he was not very alethic or fast, neither would he be able to put up a fight, another reason he resented himself for. But at least he managed to trick them. Even if he dies at least, he finally did something he will not hate himself for it later.

His pursuer caught up with him and there was only one way out, the window. It should not be that bad, should it? In movies, the hero does something like this all the time.

He threw himself against the glass, it hurt but didn’t broke. Of course, he is not strong enough, but he cannot accept that and tries again and again, no matter how much it hurts.

An unbelievable pain flowed through his body, as the first bullet pierced his flesh and the window finally broke.

Additional bullets and broken glass increased his pain and he felt something shatter in his pocket, close to the injuries he sustained, before he hit the surface of the water below.

After this, his memories became kind of blurry. He could feel the gravel, sand and water around him, the flow and movement of it. Taste it like something got into his mouth. But what mouth? … or arms, legs… the rest of his body? He could notice the light of the sun, but not see, he could touch and feel the ground but not with his hands, feet, or any part of his body he is familiar with. All this sensory information, he was not able to handle and naturally he started to freak out.

It took him many months to finally get enough control over his abilities to appear human again.

Now, he is not a monster anymore, or at least he can pretend to not be one and he is ready to rejoin society.