Aaron had joined the Wards at age 13, serving the PRT diligently for 4 years. He has moved to Ashton to provide extra protection and help the Ashton PRT recuperate after the Contagion spread by Plague Doctor has weakened the city and its forces. 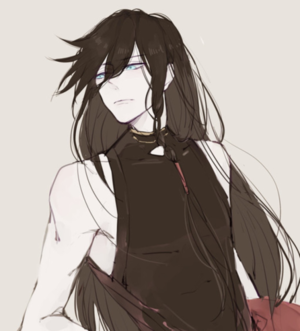 Aaron Joshua is a fair-skinned teenaged boy with long well-kempt flocks of hair which he ties into knots and buns from time to time. Given the nature of his powers, Aaron has to constantly work out, giving him a lean and athletic frame, though he is nowhere near Neptune's level of bulkiness.

Outside combat, Aaron is a pretty reserved kid, sometimes possessing very little confidence in himself when it comes to mundane activities like answering questions in class or responding to social situations. Despite his reserved nature, he's really friendly and displays a tremendous amount of loyalty to the friends who stick by his side.

In combat though, it's a different story.

As Runt, he demonstrates fierce amounts of determination and willpower to fight, especially if the odds are extremely against his favor. He will contribute in any way he can, even going as far as to breaking every bone in his body, if it means he can end the fight with victory in his side's hands.

Runt is very hard-working, barely sparing a second to take a break. If anything concerns his buddies, however, he will drop whatever work he was doing at the time and give his friends the time they need, until the problem has been resolved.

Runt Vasilos is a Brute with energy powers that replenish the more physically active he is.

As a Brute, he can lift a maximum of 2,500 lbs and has calloused skin that allows him to endure around 5 desert eagle gunshots before succumbing to his wounds and losing his life.

In regards to his energy powers, they're stored in a tank, and get filled depending on how much physical labor Runt does throughout the day. Working out by lifting weights and sprinting is the easiest way to accrue energy, which can later be expended to create two energy-based constructs; a spear and a shield.

The spear has the strength of a normal spear, but Runt can create many spears for plenty of long-ranged attack options.

His shield has enough durability to sustain at least one shotgun blast before shattering into nothingness.

His energy replenishes while he is in combat, allowing him to push himself during extreme moments in battle. However, if he pushes himself too much, his body will collapse under pressure, and force him to rest for 3 days, before he can return to battle again. In extreme moments, he can force himself to lift 5,000 lbs, at the cost of breaking bones and risking permanent injury.

Aaron was orphaned at a very young age and has very little recollection of his parents. At the orphanage he was sent to, he was a very shy child that could hardly converse with the other kids in the playground. Given his reserved nature, he could not talk back, making him seem extremely weak, and a prime target for bullies to incessantly torture him. A particular group of bullies, who were infamously named "The Butches", took great pleasure in bullying weaker and diminutive children like Aaron, often herding all the weaker children into one group and proceeding to deliver a violent beat-down that was never stopped by the adults because the Butches would make sure to hurt them in corners that were out of the view of the adults.

Through the violent beatdowns, Aaron strangely forged a bond with all the weaker kids. They shared in the pain and suffering caused by the incessant bullying, which allowed them to get closer. This group of weak children became what the bullies called "the runts" and their friendship would strengthen no matter how much more violent the beatdowns got.

One day, during another regular beat-down, one of the Runts was heavily injured. The Butches were extremely aggressive that day and they did not hold back, hurting the child badly enough that he needed to be sent to the ICU.

The Butches were not held accountable, and the orphanage wrote it off as just another rough play session that went bad.

He desired to become strong. The only way he could see himself get strong was through intense exercise.

He read up online and did whatever strength exercise he was capable of. Pushups, sprints, pull-ups, sit-ups...he did whatever his measly 13-year-old body could do without a shredding a single second for a break. His desire to become strong was growing, but his body was not built to deal with this kind of physical stress. Despite his hard work, he still seemed weak. But he pushed on...

Then came a day when the Runts were rounded up for their usual beatings.

Aaron thought he maybe had acquired enough strength to deal with the bullies. He was wrong.

The Butches had sensed some "fight" in Aaron. This went directly against his subservient nature, which the bullies did not like one bit. Hence, instead of beating the entire group, the Butches made him the sole focus of their onslaught, physically assaulting in an extremely violent manner that made the past beatings look merciful in comparison.

When they were done, Aaron fell limp on the floor, losing consciousness.

They were going to continue their assault.

They were going to continue hurting his friends.

They weren't going to be held responsible for this reprehensible behaviour.

With every fiber of his being, Aaron pushed himself off the ground, his body hurting like never before.

He wants another round.