Rockstar hails from Los Angeles, California. She was originally a member of the Wards team there following her incredibly public trigger event. She’s released most of her music during her time in Los Angeles. After a few years she was quietly transferred to Devilfish’s Wards program with a goal of “bringing more life into a quiet PRT branch.”

Rumors of her engaging in manipulative behavior of other PRT parahumans and civilians is completely unfounded, and slander. Following a period of time where she lived and worked in Devilfish, MN, Emmaline was involved in a tinkertech-related accident that saw her disappearing from the public eye in order to recuperate from injuries that she had sustained.

Any rumors of a mental breakdown are also completely unfounded, and simply tabloid-talk. After a few quiet months where Emmaline stayed out of the limelight, she turned 18, joined the Protectorate outright, and went on a World Tour for her latest album, Rosegold.

Following her World Tour, Emma returned to Devilfish. Rockstar belongs to Masquerade Entertainment Group, a label that has worked with her, the PRT, and other parahumans in the past.

Quite a lot of Emmaline’s public life is known due to tabloids, reporters, and interviews that she’s done. Emmaline has toured most of Europe and North America, and has very publicly met many of the high-ranking capes in the Protectorate as well as their foreign counterparts. She’s been one of the PRT’s media darlings since her debut, and has had the blessing of both the PRT media team, and from her agency. It’s incredibly easy to find photography, tabloids, magazines, interviews, fanfiction, conspiracy videos, and all sorts of media relating both to Rockstar and Emmaline Trenton.

For an intermediate period of time she dated Isaac Romero- another singer/songwriter- who passed away due to a likely self-inflicted drug overdose. Rumors surrounding this are all over the place, with some suggesting that she had a part to play in his death. Regardless of what one is looking for, nearly all of her private life is public and there’s very little that isn’t known about her. (Excepting some of the more nebulous details, specifications about her power, and PRT coverups.)

Rockstar/Emmaline’s personal life is, as such, constantly mired in rumors, tabloid assumptions, online chat threads, and much, much more. 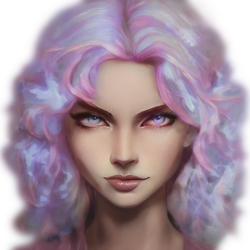 It's Emma's world. You're just living in it.

Emmaline has changed and grown since her time in the Wards and the Protectorate, and her style has changed to match. She stands at 5’5” and is typically seen in either ostentatious outfits, haute couture, or expensive streetwear. Her hair is nearly always dyed in bright colors (typically light purples), her makeup is always immaculate, and she often preens. As you’d expect, Emmaline is pretty enough to star on the cover of magazines, fashion shoots, and other things that commodify her image. When trying to go low-profile or otherwise not draw as much attention to herself, she typically wears baggy pants, hoodies, and the like. Yet, Emmaline is a prima-donna popstar with an aesthetic to maintain. Interrupt her routine at your own risk.

Tinkertech gear that she takes into the field, in addition to the standard slew of equipment that the PRT outfits the heroes with. Handcuffs, zipties, pepper-spray, SWORDFISH-approved communications relay, and the like. The only time when she is not wearing some sort of tinkertech protection is when she is ordered to go without, and she becomes skittish and standoffish without some sort of Master/Stranger protection on her. As she’s employed Master/Stranger gear in the past, she understands how subtle and ruthless it can be.

Rockstar's power gives her an innate understanding of all musical instruments, musical composition, music theory, and vocal ability. She intuitively understands anything to assist her in these goals. Furthermore, she’s a skilled programmer and computer expert, as a vast amount of her tinkertech requires incredibly complex code. Rockstar does take physical combative lessons in order to not always rely on her tech and to protect herself, but that’s a last resort due to her stature and her inexperience. Some of her hobbies include fashion design, modeling, interior decorating, and trying to improve her brand. Due to having been basically raised by PR agents and media departments, she’s good with people- even if it’s all superficial. Emmaline can manage herself and her business quite well, as long as it’s some way related to her stardom.

To put it simply, Emmaline is a psychologically troubled individual. Her power and shard have influenced her over the years as she’s tapped into her power, and her mental state has changed to reflect that. Emmaline is paranoid, insecure, manic, and hyper-narcissistic. She desperately seeks attention, validation, affection, and love, but immediately disdains those who give her the attention she’s looking for. Inversely, she actively dislikes those who don’t pay attention to her, or otherwise don’t act like an adoring fan should. Emmaline is incredibly used to getting whatever she wants, being pampered, and generally being regarded as the center of attention. When this is not true, she’ll quietly instigate drama, or otherwise create a situation where she’s back in the starlight. As a result of being both a self-claimed popstar and a cape without a secret identity, Emmaline typically doesn’t allow people to get too close to the “real” her. However, even she doesn’t quite understand what the “real” her is. Emmaline doesn’t fully understand her own person-hood at times, and often just sees herself as the media that she’s featured in. She’s trying her best to work on some of these issues- if only out of fear that SWORDFISH will disappear her if she gets too unstable. Due to her breakdown following a piece of prototype tinkertech literally exploding in her face, Emmaline was ordered to attend mandatory therapy and take several medications to manage her mental issues. She attends her therapy sessions with disgust, and only half the time ‘forgets’ to take her medicine. Yet, she is still attempting to “be a better person,” if only for the fear that SWORDFISH, her label, or the PRT will drop her completely if she fails to comply. Additionally, she is incredibly paranoid of data breaches, Master/Stranger effects, and surveillance. As a surveillance-related cape herself, she fully knows what these powers are capable of due to utilizing some of their ill effects herself in the past. Due to additional side-effects of her powers, Emmaline wants to know and understand everything about everybody. She yearns to know rumors, gossip, personal information, and every other shred of data she can get about people. Unfortunately, she’s unable to bring herself to just ask for this information or go through small talk or the typical normal human social cues. As such, she employs roundabout means to get this info.

Emmaline has had a troubled past, and her experiences have not helped her to become more of a stable person. She has a horrible relationship with her parents and has completely blocked them out of her life, placing all of the blame of her trigger event on them. Due to her public trigger event and the damage that she caused due to malfunctioning tinkertech, Emma was more or less forced into the Wards program, something that she’s still resentful of to this day. Her trigger event, explained more [here], warped her, and was compounded on by how commercialized her adolescent period was. While a Ward in Los Angeles, Emma experimented with tinkertech that startled, scared, or otherwise discomforted those around her. After an unspecified incident that was handled internally and subsequently redacted, Emma was transferred to a smaller PRT branch with the hope that she would “cool off” and have less access to some of the vices that big city life offered her at the time. There was the hope that another Los Angeles incident wouldn’t occur again. Unfortunately, events during her tenure as a Devilfish ward did indeed see another incident happening, and Emmaline stayed several months in a psychiatric care facility. Following these months, Emma was unceremoniously sent on her world tour- both to get her away from Devilfish and additionally to give her some sort of outlet to force her efforts into. While she was away, she was completely cut off from the Devilfish PRT proper, reporting to the PRT HQ and the PRT media department in lieu of the Devilfish chain of command or another authority structure. During her World Tour, she met up with or visited numerous PRT and non-PRT capes throughout her tour destinations, rapidly boosting her already-substantial fame. Briefly detained in Germany due to a riot at one of her shows, she paid her bail and spent the rest of her tour on her best behavior. It’s theorized that her stint with The Law was a PR media stunt to draw even more eyes towards her. When back in the United States, she additionally performed a pop-up show in Los Vegas between scheduled tour dates. Once all of her tour had been completed, she returned to Devilfish. While away, she made no particular effort to keep in touch with anyone, nor did she keep a finger on the pulse of what’s going on in Devilfish. Emmaline had made great strides to work with her handlers, debrief properly, and be in no way obstinate or a hindrance to the program. She’s back now, and ready to get things back to how they were- or better. 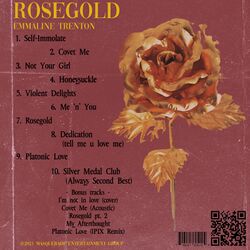