A cape with some sort of red bubbles and super speed stopped a fight that was going too far the other week. The extremely observant might notice that her left hand is mostly immobile when things get busy. 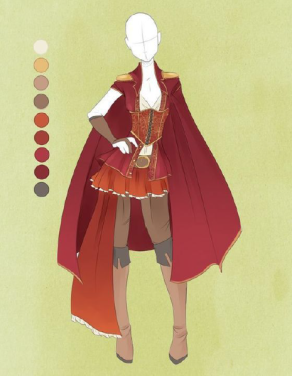 Missing her left hand. Covers her prosthetic in costume with red gloves that match her costume.

A second year fashion student, she’s handy with all sorts of things that might be useful to costume design.

Good enough with her prosthetic hand that she can in everyday life without any real any hindrance. Using it in a high-stress situation is a different thing.

A few semesters of college-level Spanish

For most of her time in middle school and high school she practiced Escrima, eventually earning a brown belt. She dropped it in her senior year, but after her brush with death has started back up with it.

On touching a person/object/surface, creates a bubble that expands at a moderate pace of about 9 feet per second in diameter (about a brisk walk) for 5 seconds till it reaches its maximum size. Anything besides this cape that moves through this field has its maximum speed reduced to a practical crawl of 1 mph, (excluding light, sound). Things that enter the field at a high speed do so without harm, a car wouldn’t act as if it had crashed, it would just go slower, and any passengers would be unharmed.

There’s no real limit to how many bubbles they can make at any time, but they disperse if this cape goes too far away from them for a while or if they’re simply being left to exist without use in conflict (read: scene and/or location changes, a stalemate where nobody is making a move goes on for several minutes.) The bubbles stay stuck on their point of origin, if they grabbed and used their power on a baseball bat the field would move alongside that baseball bat.

Something that's partially inside the bubbles would only be slowed enough that the speed difference didn't sheer off the bits inside of it, and her prosthetic counts as her for Manton limitation purposes.

These bubbles have a slight red hue to them.