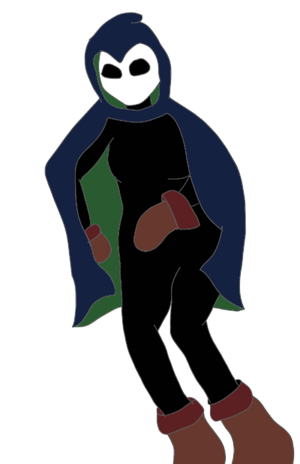 A short, scrawny bitch with dark purple hair that covers her grey eyes. Her stare is very unnerving, never seeming to waver. She tends towards dark clothing with a very gothic look. Leather straps, heavy boots, but skips the makeup.

In costume she wears a black bodysuit with a cowl that entirely covers her face, alongside body armor and heavy duty gloves and boots.

Wealth Level: 3 (Effectively 7 due to parents being filthy rich)

Quake wants to have a good time, and doesn’t care who gets hurt for it. She’s inherently selfish when it comes to people she doesn’t know, but is fiercely loyal and protective of friends and family.

A powerful vibrokinetic, Quake has the ability to sense, create, and manipulate vibrations. Despite her blindness, this allows her to see by sensing vibrations in the ground and air, out to a range of 100 feet. This also allows her to see invisible things or things on the other side of walls. Walls impair her vision a bit, cutting out a few feet of vision. Loose/soft substances like sand, gravel, snow, and grass make things fuzzy and harder to sense.

She can strike something to generate shockwaves and propagate them to break or liquify whatever she touches. This can be used to bust through any sort of wall, break down armor, break bones, or, theoretically reduce them to a puddle on the ground. While she can generate these waves in the air, the waves are weaker than if she strikes the surface directly and can only go about ten or fifteen feet. Can also radiate the vibrations out around her in a short burst.

Manton Limit: She can't propagate shockwaves inside of people, but she can push them through people by striking.

Evyn was born blind, raised by worrying parents who kept her on a tight leash, never letting her be independent. She didn’t go to public school, she never got to go out, and she had a suite of nannies and nurses to care for her. All she had was her melodica. It was a toy that she turned into a staple part of her being. If she was bored, she’d bust it out and play something, maybe even improvise a new piece.

And then one day, she was ranting on a forum about having no freedom, and somebody reached out to her. They offered her power, the ability to escape her parents’ crushing will, at a price. She had to give up her ability to make music. She’d pick up a melodica and all that would come out would be random noise.

In her anger and frustration in the moment, she took the deal, not thinking it was quite real.

+++TRIGGER+++ She could no longer play music. Now, she was merely an instrument of destruction.