Pupa is a low level minion master stationed in Olympia, Washington. She is growing in popularity among children, because of her frequent public outreach appearances, as well as a somewhat successful youtube/twitch gaming channel hosted by her and her Minions. 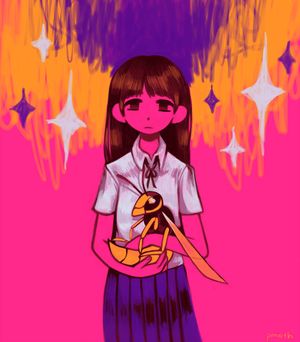 Clarice and her stuffed YellowJacket

Clarice is a 12 year old girl, with long brown hair and bright brown eyes. She is often a bit dirty, even prior to homelessness, She typically has skinned knees, and an assortment of Band-aids from various scrapes on her hands.

She has 2 changes of clothes, an Umbrella, a pair of handheld battery powered lanterns, a stuffed toy, and a few tattered bedtime stories. A couple of water bottles, and some old protein bars.

Clarice is a damaged young girl, she is pretty shy with new people, and takes time to warm up completely to people. But underneath her skittish and shy exterior, is a bright and hopeful young lady. She likes playing board games and reading.

The three projections are sentient and sapient, their personalities are crafted by Clarice’s shard using her vague memories of her actual family from her years as a toddler, as well as her idealized perception of how supportive parents should act.

Clarice seems to be unable to remember her actual family and truly believes that her projections are her biological family. Evidence is unable to sway her of this opinion, and she can selectively ignore master/stranger effects that try to convince her otherwise.

Meanwhile her Projections are unable (or unwilling) to accept that they are not Clarice’s actual biological and legal family.

She cannot directly control these projections. However the projections value her comfort and desires extremely highly, and will go to great lengths to fulfill her desires when they can.The Projections are assisted in this endeavor as they can easily interpret her subconscious desires and needs via there connection to Clarice’s shard. They can sense it when she is hungry, thirsty, tired, needs attention or comforting, etc.

These projections have a limited range of operation away from Clarice. They can go approximately 200 feet from her, before they turn back and return to Clarice, when asked about this limitation they will always say something along the lines of “It is unwise to go so far away from Clarice”

The projections will ignore any attempts to coerce them to go farther than that range. And if bodily forced past that range, they will become violent and attempt to return to Clarice at all costs. If they are taken more than 10 feet past the 200 foot range they will dissolve suddenly into a biological slurry.

Following the death of any of her projections, Clarice will be unable to accept that they are dead, and will be under the impression that they are still alive and have simply gone away to go to work,.

When one or all of her projections are deceased, they will remain this way until the next time Clarice sleeps, upon going to sleep, Clarice will become comatose and unable to awake, The Projections will then reform during this time seemingly from thin air (this process takes an hour). After they are reformed Clarice will awaken, and the projections will tell her about their ‘day at work’

Clarice’s early childhood (ages 0-4) was spent with her parents and older brother. She not have much in the way of memories about them, other than vague ideas and impressions. She would later be separated from her biological family after a car accident claimed the lives of her Mother, Father, and Brother.

Ages 5-12 would see her passed around various overcrowded foster families, the treatment was not always awful, but she would have been happier with one caring family, than dozens of extremely subpar ones. Her feelings of Isolation would go onto culminate one afternoon, when she was unfortunate enough to step in a rather large hornet ground in the neighborhood park. She had wandered off a ways away and was swarmed by the ‘bees’ as she had thought them. She sat on the ground her thick puffy raincoat pulled up over her face to ward off the stinging insects.

She cried for help, but for whatever reason the inattentive foster family could not hear her, perhaps they were busy with their other half a dozen foster children, or perhaps they could not see the small bugs from so far away and merely thought she was seeking attention. They did not heed her cries.

In that moment she felt truly alone.. Just her and the stinging insects. *Trigger

When she awoke her ‘Mother’ and ‘Father’ were there to comfort her and shield her from the small bugs. She was so glad she had such a wonderful attentive family 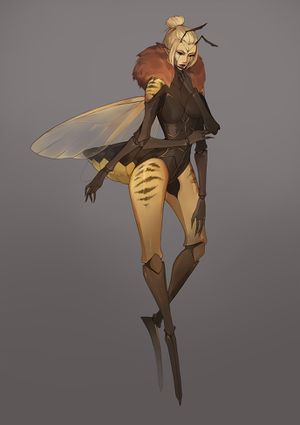 She deeply loves her husband Papa/Soldier, and likes to write poems for him in return for the flowers he picks for her everyday. She is much more vocal than her husband, but prefers to let him take the lead in combat situations while she focuses on the protection of Clarice.

Skills She has an unnatural drive and desire to learn about a number of niche 'Motherly' skills/activities, and possesses an increased rate of learning, and heightened information retention with regard to those skills: 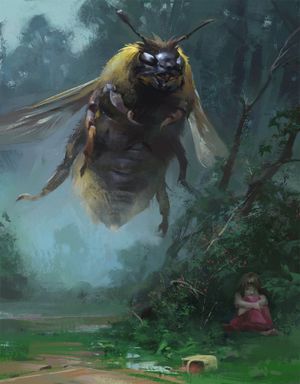 Papa resembles a Bee of an unknown variety. He is large, easily the size of a Lion (weighing about 400lbs)

Mentality Papa is a good kind man, He reads his daughter bedtime stories, and always brings his wife flowers every day, he loves football, and has a penchant for dad jokes.

He claims to works at the ‘Business factory’ but seems confused when asked about its location, Papa has stated that he is a soldier (although he declines to answer when asked which army or war)

He loves his family and is more than willing to defend them with his life. He often lets his wife take the lead when speaking to strangers.

He has an unnatural drive and desire to learn about a number of niche 'fatherly' skills/activities, and possesses an increased rate of learning, and heightened information retention with regard to those skills: