He's lithe, from eating well and exercising. He has naturally brown eyes but wears coloured contacts to change his eye colour to match whatever would go with his outfit for the day. 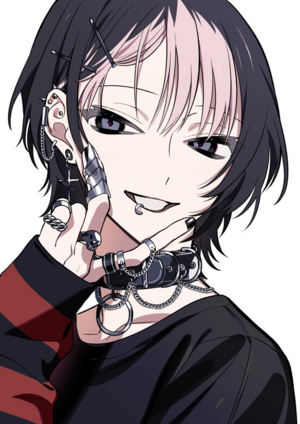 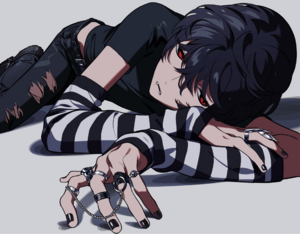 He has money, but it will drop as time goes on if he doesn't have a source of income. All he has is what he took/stole from home and earned on the way to devilfish.

Phase has a need for validation of himself; separate from his family or his power. He strives to be recognized, not for what he is but for himself.

Phase isn't a dangerous villain, he's a shithead and a "punk" who is acting out trying to get validation that is near impossible unless he somehow finds a power nullifier.

He's cocky, and condescending if it fits at the moment. Provoking others into acting so he can take advantage.

Phase has an always-on master-stranger power that causes him to appear as a vague mass of flickering static, seeming to diffuse his shape to his immediate environment in such a way that strains the eyes to perceive. Upon further scrutiny, Phase is also passively performing tiny teleportations in the static, moving a body part or his whole body a couple of inches, further obscuring his position.

While outside observers can tell where he generally is, they cannot tell what he is precisely doing. People could tell if he moved a few feet to the left, but not if he raised an arm, picked something up, or pointed a weapon at someone. This state also scrambles the feed of cameras, causing recordings to be scrambled into a static-y, obfuscated mess whenever he is in frame. This happens to recordings specifically, and a nearly real-time (less than five second delay) stream would show him normally, without his power.

Phase can also use his teleportation in a more directed sense, tied to a minor thinker power, allowing him to vaguely, semi-consciously know what people are observing around him, and can teleport 10-20 ft such that he appears in the periphery of their vision.

He does make small teleports that are out of his control, just instinctive. But he can also control the teleport to move around, related to people's regular and peripheral vision. It's all about the sightlines, his "power" doesn't like to be viewed.

“Stop trying to shoot the asshole and just shoot ‘em!” “I’ve been trying, but we only have pistols and this fucker hurts to even look at. Do you expect me to just fire blindly?! What if I damage some of the merchandise?” “And if we lose all the merchandise, then we don’t get anything. Fuckin’ shoot him!”

“Damn, you guys are really terrible. Have you thought about maybe getting real jobs? Or doing something you’re less terrible at?” The mass of static mocked them as it moved forward, popping up next to one of them before he collapsed with the sound of a taser discharging. “Like, seriously, you guys are super bad at this.”

“Fuck you, you waste of space cape shithead.” The man sneered as he pulled the trigger blindly, much to Phase’s dismay as one of the bullets struck home. His teleport going off and removing him from the man’s sight outside of the warehouse.

Phase; Jacob Avery Franklin, grew up in a cape household in the ever moving city of Las Vegas. His parents were independent Heroes contracting out to the casinos and working with the Protectorate, he grew up with an older and younger sibling. All three of them were under stress from the public eye to get powers, to follow in their parent’s footsteps.

League and Zaru, his Father and Mother respectively, focused on their cape careers and weren't always there when their kids needed them, not until they would trigger. Cloak, his older brother triggered and two months later his younger brother also triggered, taking the name Dagger. They were treated like real members of the family, while he was mostly an afterthought. Jacob never wanted for anything materially, their family was well off with their contracts in the city, but that wasn’t what he felt was missing.

Jacob found his way into a seedier part of town, trying to lose the same three assholes that seemed to follow him like flies to a garbage truck, and funnily enough it worked, or he’d thought it had. At least he did until realizing where he’d ended up, the red light district and out-front of a nightclub with flags in the windows that he vaguely recognized… They probably weren’t important. How he’d realized it was by walking backwards, straight into the large man that was standing in front of the door in a shirt two sizes too small for him.

When the article was posted days later, he got the attention that he had always been wanting from his family, unfortunately it wasn’t the type he had been craving. His father had disowned him in all but name, his mother was beside herself with what he’d done, and his brothers didn’t quite understand but said they were there for him. He had no idea what they were going on about, why everyone was so angry… Until he’d gotten his hands on the article himself, until he’d seen what the people were saying, how they saw him. A minor, chatting to the larger than life bouncer; Jacob had learned his name was Todd, and going inside. He’d only gone in to call for a taxi.

This was too much, everything at once…

His whole world was torn asunder in those moments.