From WormRP
< Patchwork
Jump to navigation Jump to search 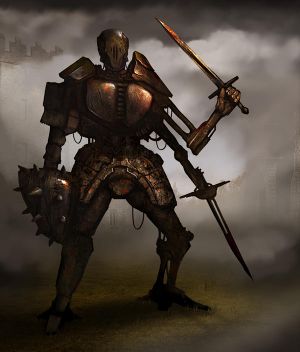 An example of one of Patchwork's changer configurations 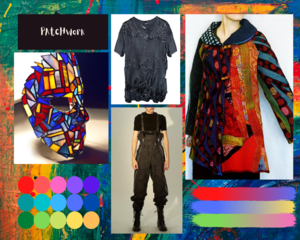 What Alphonse wears in costume (as Patchwork) 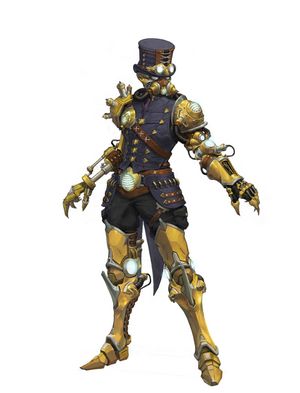 What Alphonse wears in costume (as Mister Multi-tool)

Alphonse Beckett: Alphonse is a young man with short dirty blond hair, they stand at 5'10" and are most notable for their uneven skin tone, numerous faint scars, and strange 'birth marks.'

They dress in generally nice quality attire, being quite in-tune with modern fashion, without looking like they are trying too hard to look cool for other peoples sake. They often have a smile on their face, and take good care of themselves physically both with regards to skincare, hair-care, healthy diet, and reasonable exercise.

Mister Multi-tool: Mister Multitool fashions themselves as a modern day Inspector Gadget. Standing at 6ft even, they dress in a costume consisting of shades of light blue and teal, the costume itself is fashioned after something an aristocrat in a period drama might wear, with lots of easily accessible buttons, clasps, and velcro pads to allo easy access to bare arms/legs

the most glaring feature is a partial suit of steel knights armor, consisting of A Helmet, Chest plate, and Pauldrons.

Patchwork: The few times they have been seen outside their changer form, they wore a stylized patchwork outfit,doing there best to look like a pretentious art snob at a particularly weird fashion show.

While their changer form is extremely fluid, and often never looks the same between outings, they have when agreeing to meet under truce, they have chosen to present themselves like a (comparatively) simple recycled junk sculpture one might find at an art-museum.

Wealth level: 4 Lives in an apartment with their twin brother Kyle, they drive a 1992 Nissan Stanza, and work part-time at the local art museum as a receptionist.

Most of Alphonse's spending cash is spent on antiques, sewing supplies, and miscellaneous art supplies. With a rainy-day fund being used for big cape-related expenses.

Alphonse Beckett: When truly letting themselves drop their other persona's Alphonse is a jovial but slightly introverted person, preferring the company of a mug of tea, a good podcast, and their digital drawing tablet, over a crowded party or loud get-together.

They care deeply about their brother, despite being twins, Alphonse considers Kyle to be the older and more mature sibling, whether this is true, or just in Alphonse's head has yet to be determined.

Alphonse loves art, fashion, and cooking (although they are only good at the first two) they enjoy putting on their persona's but still breath a breath of fresh air when they get home and get the chance to relax.

Circumstances involving their father splitting their son into Alphonse/and/Kyle, Alphonse's rather unique neuro-chemistry had been a pressure cooker of Disorders ready to burst.

Their actual trigger had only sealed that deal. In the wake of this Several personalities came to the fore. Alphonse's original personality, a somewhat docile artist. A rude, sarcastic low-empathy personality, and a friendly, boisterous, hyper-empathetic personality.

Their Shard only reinforcing this disorder for the sake of data.

Mister Multi-tool: Mister Multitool is a jovial and eccentric crime-fighter, having built their persona around early golden-age superheroes, and Inspector gadget. The kind of hero to help someone across the street, but will punch a gangster square in the jaw not 10 minutes later. They enjoy puns, verbal quips, and egging the villains towards monologuing (not just to take advantage, but cause they actually appreciate hearing them.)

Patchwork: Patchwork is based around the persona of a stereotypical fashionista art-snob, playing up the pretentious stereotypes, and trying to tear down their enemies with petty insults and verbal jabs. They are more reserved but more verbally aggressive than MM or Alphonse. This is often used as an outlet for Alphonse's more violent and aggressively manic tendencies.

TLDR: Striker power lets them catalog whole or partial objects, and form a stitched together, patchwork changer form out of copies of cataloged pieces. This changer form takes a short while (3min) to fully shift into, but can be accessed quicker (35sec) via a more limited Partial transformation.

The Partial changer form: only allows up to half of Alphonse's body to be replaced with cataloged bits and pieces, switching between these pieces is much quicker in this form, at the cost of leaving parts of his body squishy and vulnerable.

The Full changer form: requires more time and consideration to swap out cataloged pieces, at the benefit of (typically speaking) more durability. This form is highly variable, literally being a mix-and-match of whatever Alphonse can get his hands on.

Basics: His Full changer form is limited to basic silhouette, always requiring the presence of 1 head, 1 torso, 2 legs, and 2 arms. Alphonse can however add additional limbs beyond the minimum requirements.

Senses: Regardless of current composition, Alphonse can see, hear, and speak from his head. The addition of additional sensory organs/devices to his patchwork form, can allow him additional options though.

Weaknesses: Replacing damaged limbs is not an issue, so long as he has a viable replacement in his catalog, catastrophic damage or destruction of the head and/or torso however will eject Alphonse from his changer form entirely.

This causes him to revert to a baseline human state (unharmed, but disoriented or unconscious.) His power needs time to recuperate, requiring at least 5-10 minutes before he can access either his full or partial changer form again.

Between the Cracks: A changer state made of a patchwork of mix-and-matched snapshots is going to have seams and cracks, in Alphonse's case, those cracks are filled with unearthly black 'strings' and 'ribbons' as well as bits of fine particulate (dust, sand, grit, etc)

Repairing damage mid-combat: Replacing damaged/destroyed pieces takes anywhere between 5-20 seconds depending on the size of the section being replaced.

From the outside this looks quite disturbing, as the black strings/ribbons mentioned above come pouring out from the changer forms, seams, washing over the damaged section, and when they are done, they retract back into the cracks revealing one or more new parts.

Stealth potential: While theoretically they could copy an entire person by collecting the requisite snapshots to try and assemble a full person or creature like a completed jigsaw, sadly the seams and cracks between snapshots are readily visible when they move around. maybe enough to pass as a given person at a distance or in a crowd, not enough to hold up under any scrutiny.

Catalog Basics: Cataloging pieces for use in his changer form(s) necessitates touch. His power creating a 1 cubic foot 'snapshot' from the point of contact. Allowing him to generate and utilize a replica of it as a peice for his changer ability.

Cataloged pieces can be organic, inorganic, living, dead, power generated, or mundane, so long as it can be 'touched'.

Alphonse's changer form can only have a single instance of any particular snapshot. Damage to a cataloged snapshot resets upon exiting their changer state, as the snapshot is always re-manifested as it was when it was copied from the original.

Snapshots of complex machinery and electronics function as though fully powered, and can be toggled on-and-off just fine, while something like a flamethrower, a revolver, or a blowtorch only has what ammo or fuel it normally contains. (with the fuel or ammo resetting to full between exiting/entering the changer state.)

Tinker tech is an odd exception, his power able to copy the physical half of Tinker tech, it doesn't actually emulate the extra-dimension fuckery that actually makes the Tinker tech function. Tinker-made materials are able to function fine for the most part.

Alphonse is (at will) able to 'stick' themselves to an object, person, or surface upon touching it.

This effect works via a combination of what resembles magnetism, and an effect not unlike what is seen in Velcro.

The pseudo-magnetism imparts a pulling effect, not unlike a relatively powerful industrial magnet.

While the 'Velcro' effect is actually the spontaneous generation of microscopic strings and hooks extending from the surface of Alphonse's body, that do their best maintain a firm grip upon whatever surface its presented with.

In effect these combined allow Alphonse an unparalleled grip on hand-held objects, makes them a pain in the ass to grapple with, and can be used to assist with climbing and parkour.

Alphonse and Kyle Beckett are not the usual kiss/kill, only feeling more at ease and relaxed in the presence of their twin. Additionally they have an innate directional sense towards the other twin regardless of distance. Increasing in strength and accuracy the closer they are to eachother.

The Beckett Twins had a relatively average upbringing, their parents were weird, but not totally unpleasant. Things had changed when they were both teenagers, about 17. They had never been allowed in the basement, chalking it up most of their lives to Dad being odd and enjoying their personal space an unhealthy amount, he even kept it locked with a chain of all things.

It had started while their parents were away, they had to attend a funeral out of state for one of their college friends. The two were home alone, and it was winter. The snow storms had been unpleasant, and the Circuit breaker had been tripped, of course.. the circuit breaker was in the basement. They knew Dad would be furious, but they saw no other choice, they needed the heater and the lights after all.

Cutting the chain with the bolt cutters from the garage had been the easy part. Coping with what they found however would haunt them. Their father was a tinker. A wet tinker. The two of them had found his lab, and the notes they could decipher would haunt them for the rest of their lives.

Mom had only ever given birth to one son, and yet.. they were twins. Dad had done something horrific to his own child, cutting them in twain, and growing bits to stitch onto the two halves, until he had two sons instead of one. It made sense, they had always had scars and discolored patches of skin, their parents had explained they were in a car wreck when they were infants. But Alphonse and Kyle Beckett were originally two halves of one child.

Alphonse Beckett is both the super-villain Patchwork, as well as the Super-hero Mister Multi-tool

This is a consequence of power-induced Dissociative Identity Disorder.