A thief by trade, Packrat plays by the rules better than many Las Vegas Villains, and as a result often squares off against the Vegas Wards.

She is a Shaker/Mover, able to manipulate the environment and open portals to what appears to be a pocket dimension, or maybe a mine somewhere.

Has recently departed Las Vegas but not before one last crime spree, stealing a staggering amount of slot machines, poker, roulette, and other assorted game tables, and enough cards and casino chips to start her own Casino.

The icing on top is stealing one of the famous 'welcome to fabulous Las Vegas' signs. 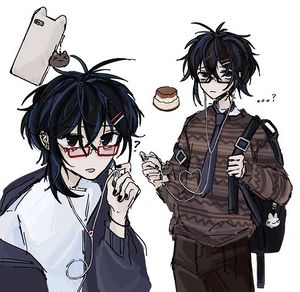 Civie: Standing at 5'1 and weighing about what you'd expect, Matilda casts a small figure. Matilda is pretty fit athletically, but is quite skinny all things considered.

She has messy short black hair, and wears glasses since she is near-sighted. She Dresses in androgynous and slapped together outfits with little rhyme or reason.

Costume: In costume packrat wears a full-body jumpsuit with kevlar padding all over and a ballistic plate on the chest and back.

Most unique part is her helmet, which contains gasmask filters and non-tinker tech infrared goggles which she can toggle with a switch on the back of the helmet.

Her boots have 2 inch platforms in them.

Wealth Level: 6 Though she favors oddities, collectables, and sometimes outright trash, she has accumulated some significant liquid assets as indicated in her Wealth Level.

She also has a few investments that see relatively consistent returns, enough to offset her basic living costs at least.

Her collection in her pocket dimension is extensive enough that I wont bother listing most of it, but pertinent, big, or important stuff will be listed in the comments.

Matilda in her youth was a bizarre weird feral little girl, and never really understood what all the hype regarding girly and feminine stuff was all about.

She never grew less weird or feral, she just got better at playing along with polite society. She never cared about relationships much but would probably say shes Demisexual.

Matilda isn't paranoid as much as she is hyper-fixated on preparation, the kind of person who figures out 15 alternate routes for a 4hr road trip because she enjoys it.

Packrat can open portals into a vast extra-dimensional space. Capable of shaping and manipulating the terrain inside this space, and too a lesser extent the outside world in an area immediately around the open portals.

This extra-dimensional pocket dimension appears as a seemingly infinite subterranean space made of solid basalt. Originally with a single small room sized hollow space, Though it has since been expanded massively.

Details on the portals:

While inside their pocket dimension Packrat can exert mental control over the basalt that the dimension is made off, shaping existing basalt, generating new basalt, or simply willing basalt to disappear entirely. (4-6mph / Average Jog)

This can be used to 'Shift' Basalt into a specific shape, like molding clay.

This can be used to 'Sink' Basalt out of existence, carving out rooms, hallways, and pits. Or carving chunks of the stuff into simple objects like furniture or weapons.

It can also be used to 'Grow' Basalt out of any surface, allowing formation of walls, pillars, and even spikes.

This ability to shape matter seems to leak out of open portals, reaching 50ft in all directions of any portal. Though it works at a reduced speed (2-4mph / Average Walk). changes made to the outside world recede and return to normal over a period of 20 minutes, once the portal is closed.

The Pocket Dimension's rooms must be connected, no closed off cells.

Packrat's power comes with a compulsion to 'fill' the pocket dimension, basically being a strange form of power induced kleptomania. She is a Noctis cape, and has dark vision, though its got a weird shade to it that she isn't a fan of. Power comes with an instinctive understanding of Architectural engineering.

Upon Packrat's death her power will cease putting energy into keeping her pocket dimension separate from baseline reality, resulting in a (seemingly) permanent spatial distortion effect. With her extra-dimensional space accessible by a massive 20ft by 20ft jagged edged portal.

With strange basalt-crystals slowly-but-consistently growing on structures within 30ft of the open portal that remain stationary for longer than 20 minutes at a time, this happens on both sides of the portal, but only immediately near the portal.

Her attempt to work an actual office job was miserable, of course stealing office supplies helped alleviate some of the monotony and keep her urges in check, it was still unsatisfying.

Earthquakes in Sacramento weren't uncommon, though the really bad ones meant people evacuated the building. During one particularly bad Earthquake on a day when she was feeling especially fucking miserable, her urges to steal were not doing her any favors.

Its for that reason that she chose not to evacuate and steal some work laptops instead, of course she wouldn't have known that the building had suffered major structural damage, rather than the usual "oh nooo some paintings fell off the walls" that they usually had.

So when the building started collapsing around her, she found her self trapped, her own fucking greed had sealed her fate.

The hole that she had opened up in the wall had led to a pitch black cavern, black stone surrounded her on all sides, but she could see despite this. The walls of stone felt comforting, where the walls of broken masonry had felt like death.

It was here she stayed for many hours, learning that she could stretch and shift the cavern, when she heard emergency workers calling in the distance, back through the hole, she left her little sanctuary, and was met with workers digging into her little crevice.

Maybe Sacramento wasn't for her after all.. Vegas never had Earthquakes, and she was through with California.