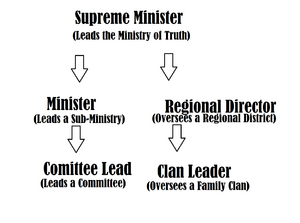 Although the exact time of their formation is unknown, they were active under their current name as of 1995. The Ministry of Truth, often shortened to just ‘The Ministry’ is a nation spanning organization of parahuman supremacists.

It is their firm belief that parahumans should rightfully govern the nations of the world, with secondary goals of understanding parahuman powers, and if possible the conversion of regular humanity into parahumanity by force.

While nominally supporting Parahumanity as a whole, they have a strong bias towards powers that are mental in nature, with Thinkers making up the bulk of their numbers, followed by Tinkers. Though they do have a good number of other parahumans in their ranks.

The Ministry is among the most knowledgeable organizations in regard to forcing triggers. With a variety of methods, and with more under development, some working better than others. Among their most repeatable methods is a comprehensive breeding program, due to the relative ease second and third generation capes trigger compared to a first-gen.

The Ministry of Truth is run by a mysterious individual named ‘Panopticon’ referred to as the Supreme Minister. Beneath Panopticon are various leadership roles within the organization, most notable among them are the Regional Directors, Clan Leaders, Committee Leads, and Ministers 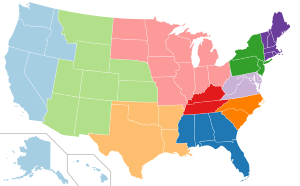 The Regional Districts of the Ministry of truth, each overseen by a single Director.

Organized into Districts that cover large regions of the United States, these areas are headed by a Regional Director, who ensures the cooperation of the various clans, research compounds, and assorted Ministry points-of-interest located within their regional area.

The Director's primary job is ensuring that intelligence and resources are shared among their constituents as needed. If Panopticon is the President, then the Regional Directors are Governors. They are well respected among the Ministry and to reach that position is an honor.

The jurisdiction of the Regional Districts have changed overtime, but in recent years have solidified in a parody of the PRT’s own Regional Divisions.

Sub-Ministries are large groups, almost akin to political factions, focused on broader overarching goals that affect the Ministry of Truth as a whole. There are a number of smaller ministries, though these listed are the largest and most prevalent.

The Ministry of Chronology is composed primarily of postcogs, precogs, and clairvoyants, though there are plenty of outliers who are none-the-less of assistance. Based around the goal of recording the past, and charting out the future. Working to predict as much as they can with as much accuracy as possible.

The Ministry of Propagation has dual-purposes, first is utilizing Eugenics to shape the Ministry of Truth itself, mapping out both genetics, as well as parahuman budding and pings. Secondly they work to unravel the underpinnings of how parahuman powers propagate and function. With the end goal of learning enough to manipulate how it propagates to do it artificially and en-mass.

They are not necessarily just ‘the tinker ministry’ but consist of any number of capes who can develop or construct something. Including ciphers, methods of indoctrination, propaganda, mundane but customized equipment, costumes, educational curriculum's, mundane software and hardware, among a variety of other things.

Monitoring individual persons-of-interest, teams, departments, and containment zones. Trawling the internet for anything pertinent and saving it to backups. Monitoring Foreign and Domestic threats, and keeping an eye open for recruits and targets.

They also serve as counter-intelligence, being the ones who work to sabotage attempts by SWORDFISH, NUCLEUS, and other enemies from delving too deep into Ministry affairs..

The Ministry of Subjugation has the largest number of non-thinkers among their ranks, being the ‘military arm’ of the Ministry of Truth, utilizing what offensive powers they have at their disposal, as well as unpowered but deeply indoctrinated storm-troopers with top-quality equipment.

They are tasked with destroying enemy resources, killing enemy personnel, kidnapping targets that have been flagged by the Ministries of Propagation and Observation for either indoctrination or interrogation.

They excel at assassination, and bombings, thought they can duke it out in traditional cape fights if necessary when needed.

Family Clans are a smaller sub-division of the Ministry, with only a few outliers a clan is usually numbering at least two-to-three dozen, consisting of a number of intertwined family units.

Each Regional District may have anywhere between two to seven Family clans working within their borders.

These clans are related either through Marriage or by blood. With the Ministry of Propagation working to arrange marriages, childbirths, and child rearing with the goal of trying to guide the triggers of Second and Third gen offspring.

Though they do recognize the difference in Marriage and Child-rearing for Propagation, as opposed to doing it for love, and allow it as long as it doesn’t interfere, since it builds cohesion in a clan.

Clans all have hyphenated last names, with their clan names always being added to their family name. Traditionally a Clan’s name is chosen in honor of a historical inventor, scientist, or scholar.

Lead by a Clan leader or Clan Elder who ensures the cohesion, organization, and loyalty of their family. Overseeing experiments, planning missions, and issuing judgements as needed. Often Negotiating with locals on behalf of the clan, and communicating their thoughts and needs with Leadership of neighboring clans as well as the Regional Director.

Whereas a sub-Ministry focuses on broad overarching goals, Committees are designed to bring together like-minded capes to research, investigate, or collaborate towards a specific project or goal.

The ‘Para-Zoology Committee’ is working towards unraveling the mysteries behind animal triggers [See case-160s] methods to induce these triggers reliably, and how they relate and synergize with Para-humanity.

The ‘Synthetic Life Committee’ is large enough that it has almost grown to become its own department underneath the Ministry of Development, and works towards exploring artificial and synthetic life, whether they be Mechanical, Digital, Biological, Infomorphic, or otherwise.

The ‘Physical Law Committee’ is working to unravel and expand upon the understanding of Physics, attempting to reverse engineer what they can from parahuman powers, reliant on their own powers as secondary tools, but fully well aware that they cannot necessarily trust their powers to provide unbiased or completely accurate results in place of the scientific method and raw mathematics.

There are committees working to understand Manton Limits, trying to reverse engineer Tinkertech, experimenting with case-70s, working to do any countless number of more niche or specific projects and Experiments.

The Reclaimers have on several occasions had their interests align with those of the Ministry, wherein the Ministry have provided information that would hurt the two groups mutual enemies.

And in one instance working in tandem to successfully terminate two NUCLEUS Tinkers, two SWORDFISH thinkers, and a Protectorate escort during an operation in California, and provided the other terror group with weapons and equipment in exchange for priorotizing certain targets over others.

The Ministry has likewise utilized the services of one of the Goetic Covens to ‘order’ capes matching certain criteria in order to fill in gaps in their thinker coverage, or to introduce specific traits and power elements into the Ministry of Propagation’s Eugenics program.

Additionally they have worked with a number of smaller criminal organizations, both mundane and powered, with a penchant for using Mercenaries for less important missions, rather than risk their Enforcers in less-key engagements.