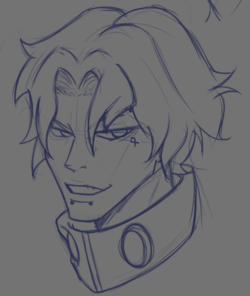 When out as a cape he wears a metal mask that he crafted using his power. It covers most of his face, but leaves his mouth free.

He's been pulling a life back together. He lives in a studio apartment, and has a job in a mechanic shop.

Clint always wanted to make an impact, be *known* somehow. His Shard has solidified this into a desire to shift the status quo, topple those standing on top.

He's prideful, and will not stand being ignored.

Selfish, will happily backstab others if it benefits him.

Midas can transform his body into glimmering dust, at a volume ratio of 1:3.

The main ability of this form is that the dust can merge into inorganic solids and liquids (costumes are mostly Manton-protected, and he also struggles with complex metamaterials) at a volume ratio of 1:1, turning it into gold that Midas controls.

This gold automatically floats around him, and with a bit of effort he can replace any limbs he turned to dust.

The transformed materials turn back into what they were when Midas pulls the dust back out again, and can fuse back with surrounding environment. However, the materials will only return to the same composition if he took great care not to mix anything in.

Both the dust and the gold can fly through the air through a personal TK field. It's not full flight however, as it cannot go further than a few meters from a solid surface.

The Shaker ability can even be exploited to travel *through* objects, though this is made difficult by the fact he can't 'see' anything while fully inside objects.

The gold is obviously more durable than a normal human, though Midas still gets bruised when it is hit hard enough. He can adjust the solidity of the gold and turn it close to liquid to avoid getting hurt, at the cost of being unable to deal damage himself.

When in dust form Midas can sense the environment through proprioception, when in gold form he sends out radar pulses to 'see'.

'Clint' always had a quiet ambition. He wanted to make an impact, be known, *excel*! And when he realized he would always be inferior to people with powers, he started looking into how to get those. Coven contacted him, and he made a deal. He gave up all existing connections and many of his possessions.

He had to start again, all the way from the bottom. But now, he had powers. And his ambition had become a flame.