A long-time resident of New Mexico, Miasma has moved to Devilfish, Minnesota for unknown reasons. Though he is not generally the first to escalate, he rarely backs down and deals with threats swiftly and brutally. Caution advised. 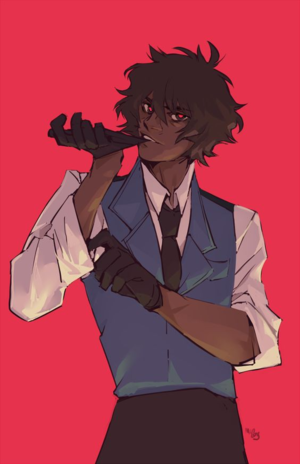 Riley is 6 feet tall, with dark skin and brown, fluffy hair. In civilian wear, he dresses nicely, never in anything less than a dress shirt, pants, a vest and a tie to match, along with a set of nice gloves.

His costume outfit, in accordance with his name, is inspired by old-fashioned plague doctors. The whole thing is colored a deep purple with dark blue and brass accents. It has the fitting plague mask paired with an inquisitor-style hat. It has a mantle split down the middle reaching down to his waistline, straddling the line between mantle and cloak. He has smaller plates of armor on his chest under the top layer, showing around his stomach. He wears a belt of the same purple color with a brass buckle, a blue sash underneath to accent. He has a whitish apron of sorts in front hanging down to knee level. He also has a set of brown gloves, to provide a bit of color contrast.

In costume or not, Riley knows his goals and works to them without letting distractions get in the way. He’s well-spoken, but also blunt and doesn’t dance around things. In his villain persona, he doesn’t speak much and doesn’t respond to taunts.

Miasma’s power is a Breaker form that emits a pink-purple fog from his hair and skin at a medium rate, fast enough to coat an area of 2000 square feet with a 6-inch layer within between five and ten minutes. In open areas, the fog tends to condense around him, thinning out at the edges. The Breaker state itself causes his hair and eyes to glow a bright purple color. Additionally, it causes whatever he has on his face to fuse to his body somewhat. Thankfully, the state does not require oxygen.

While he is in the Breaker state, he can cause the fog to condense into minions of different sizes. They tend to have animal forms as people respond slightly better to them. They can “ping” him with rudimentary ideas, such as “someone is coming this way”, but he is unable to look through their eyes to see what the exact issue is. Out of the state, the minions freeze and hold whatever position they were last in, turning into statues. Miasma can focus on his power, stopping the flow of fog for a couple of minutes to build up a powerful blast when he releases it or drops from his state. This "pressure building" takes a varying amount of concentration that ramps up over time, effectively capping him at 20 minutes. He can dismiss the minions to free up the fog they use, allowing him to store big amounts for later or further use. If an enemy breaks a minion, the fog used to make it is lost, returned to whatever pocket dimension it came from originally.

It was a simple job, smash and grab. Not the most elegant one, but it was needed to supplement other income. The timed charges he had set up earlier blew, creating big holes in the windows and door. He let out a large swell of gas which immediately turned into a large flock of birds and sent it flying through into the space of the jewelry store. Many of them dissolved into a purple fog, which he stepped through into, revealing his form. He turned back into his human state, giving him back his face, and more importantly, his mouth. “Ladies and gentlemen, I recommend you do nothing grand or heroic. Allow me to go about my business, and we will all be done quickly.”

Riley grew up in Santa Fe, New Mexico in a middle-class family. He never had a lot of issues with money and had a good set of friends. A couple of years after he graduated college, he and his friends went on a camping trip out in the desert, figuring the weather would be nice enough to enjoy it. Unfortunately, that’s not how it went. He got stuck in a crevasse in the morning, not hurt, but not able to get out. His friends told him that they would be back, that everything would be fine. Cut to high noon, sun blazing directly overhead. The day was much, much hotter than it was supposed to be, and the heat was getting to him. His brain was getting fuzzy, thoughts weren’t coming like they should. But his friends would come, right? Yeah, they had to, they were his friends, he’s known them for ages. He was thinking about this as hard as he could for 15 minutes when he came to the “realization” that he was going to be stuck down there for a long, long time, and triggered.