A member of the tribunal of hounds, this nonbinary villain was issued with an arrest warrant for attempted murder after a brief lived spree of vigilante justice. Known for the ability to teleport, and that their teleportation requires line of sight to be broken in order to function. Prefers heavy bladed weapons and ambushes.

Civilian: Gideon wears their blond hair in a ponytail, with the sleeves of their long blue shirt covering a few scratches and burns on their arms. They don't wear a tie, but keep their shirts buttoned all the way to the top. Their features are plain but androgyne, with a modest chest. Their hair covers their ears but their surgically added tail is plain to see trailing out from behind them.

Cape: Mewl wears their blonde hair down, draped over their shoulders and back. Their costume varies.

Costume 1 consists of a lavender/lilac office shirt, the top button undone and the sleeves rolled up to the elbow. They wear pale brown safety gloves, with safety boots in a matching brown. Their mask is that of a white cat with pink pipe cleaners for the whiskers, worn over the upper half of their face and obscuring their nose while leaving their mouth free to smile. A half skirt made from leather belts covers the various holsters they use to carry their hatchets. A pair of black suspenders keep their trousers up and support the belts and holsters. 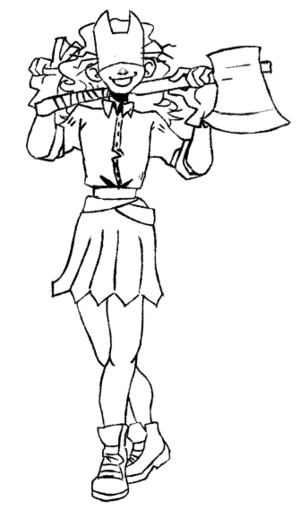 Costume 2 has an eyeless mask worn over the face, with a black dress shirt worn with red trousers and vest top. No utility belt is used with this.

Mewl lives with retired villainess Leanan Sidhe, and is permitted cautious access to her significant funds, though Mewl prefers using cheaper equipment. To keep themselves busy they've taken a minor office role in one of the business's Sidhe owned, using it mostly to fill the day and get them out of the house.

Their typical loadout is just safety boots, and a battleaxe they bought themselves as a treat for their anniversary with Sidhe. The rest is only when they're preparing ahead of a fight.

Mewl has trained in ropeplay and knot tying. They’re proficient in securing people and objects and rigging hoists. Basic acrobatics and athletics. Accurate and able with a throwing axe and fighting with hatchets, but not on the same level as a professional. Mewl has trained themself to climb and vault most things their height, and to jog but not run whilst weighed down with their amunition and gear. They know a few sailor's knots, but nothing sophisticated. They have training in safely lifting and transporting heavy loads, as well as health and safety, and were formerly their office's designated first aider.

Mewl is somewhat personable. They enjoy giving people a glimpse before moving out of range, immitating a horror movie villain while still playing up the ridiculousness of their costume and gimmick. If someone engages them in conversation they'll play along, and the idea of someone being as into the potential camp of capery amuses them. Mewl won't cut kick someone while they're down. They loathe fighting someone who is injured, preferring people to run, and often giving people a head start in order to keep things interesting. They go for nonlethal blows when swinging, and aim to leave cuts in places where a fellow cape might be able to hide them.

Time with the Tribunal of Hounds and starting to medically transition softened them somewhat, and now the violence they enjoyed as a cape is more of a once every few months thing. They've started to take an interest in transhumanism, and are interested by any cape able to offer a change of their body more severe than tattoos and piercings.

Mewl is a giggling fiend, giving people almost glimpses before moving out of range again. They imitate a horror movie villain, indeed they had tried their hand at being one while starting out as a cape. If someone engages them in conversation they'll play along, and the idea of someone being as into the potential camp of capery amuses them. Mewl won't cut kick someone while they're down. They loathe fighting someone who is injured, preferring people to run. They go for nonlethal blows when swinging, and aim to leave cuts in places where a fellow cape might be able to hide them.

Mewl is a coward, willing to run and hide if they think they can't get the upper hand, and would normally never risk their life to save another person, though they'd get really worried and have to stop themselves from leaping in if it was Sidhe.

Gideon is a somewhat outgoing flirt. Camp in manners and dress. They’re asexual but don’t let that be a barrier to pursuit of romance or interactions with others. Talk of sex or sport bores them greatly. That said, offers of pets or punishment will put them back a little and tend to extract a blush. They’re far too young to be retired and while away their time finding things to amuse them.

When Meal falls unconscious or suffers severe trauma they enter a deathlike state and gain a charge. This charge triggers when they are no longer being watched by human eyes to grant a brief spurt of healing, regaining the ability to do this when they next go to sleep. Going down a second time before they go to sleep will stick. They are seemingly unaffected by weapons lodged in them before the healing surge, even axes buried in their side, and will need to remove them to allow the wound to heal.

At a distance of 30 to a hundred feet from a person or camera, if Mewl is about to be spotted, Mewl can teleport a distance of ten feet, with an audible rush of air accompanying this movement.