None, having gotten her powers in the Arabian Strife and hasn't really gotten a chance to use them since coming to Ashton. 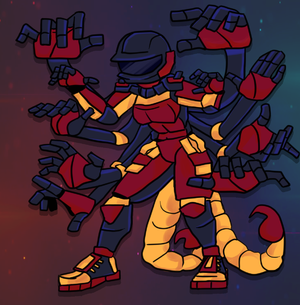 Short for her age at 5 foot nothing and thin due to not always eating regularly. Very clearly missing an eye, with several scars around her body. Remaining eye is light blue. Hair is dark brown cut in a messy bob with bangs. Has three runic tattoos.

In her armor Trisha stands taller than normal, just over 5' 6" and bulkier. Three extra pairs of limbs along her waist and one extra on her shoulders. Two tails hang almost to the ground. Runs on six of the limbs when going fast, surprisingly low to the ground.

A reasonable, kind of dumb teenager struggling to fit into an unfamiliar land. Actual tries to be a functional member of the Wards and not just to maintain a cover. Projects a hard exterior at times which is just her default reaction to be annoyed or confused by stuff.

Ward Stuff, a hidden pack of smokes and a lighter. Coven might send her a care package if it helped Coven's goals but unlikely.

Mover (minor power): Can teleport via LOS up to 10 feet every 10 seconds. Can change direction and cancel momentum coming out of the teleport. If Medjed teleports less than 10 feet than she can additional jumps so long as the length of the first jump plus the subsequent jumps don't exceed 10 feet. Can't teleport through things like a window.