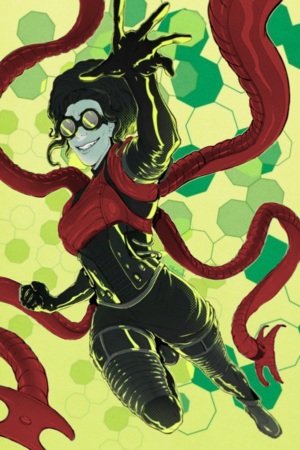 Lovecraft is known to have been quite the thorn in the side of her hometown’s PRT. A master of hit and run, smuggling, and generally being too crafty with the use of her power to be worth the effort of trying to take down, she gave her shot at being a big time villain, sort of failed when she didn’t much have the stomach to do any of the more horrible and violent things that are often require of cape muscle, and left town.

She looks physically fit, and since her cape costume is a black and red bodysuit with large red Lennon-framed glasses over a vantablack mask, it shows. She stands at 5’6, not the tallest but far from short, and has hair that is too often messier than is reasonable, offset by being just as dark as her outfit. She’s dark of skin, with hazel eyes and thin eyebrows, and her voice could be described as something between a shrill melody and a thunderclap. Outside of her costume she tends to braid down her hair hurriedly, and wears loose fitting sweats and the like.

Wealth Level: 4. She triggered on a college trip, all expenses paid for, but she herself wouldn’t have likely been able to afford it without the Full Ride backing her up.

While, yes, she is technically a villain, she’s mostly lost the taste for actually breaking the law for anything besides necessity: something about being dragged along to gang warfare triggered her flight response and that’s about as deep as that needs to go to show she’s not really a good fit for villainy.

Won’t stop her kleptomaniacal habits, however.

Grappling Hook Mover Primary: Lovecraft’s powers manifest as a blackish red, 100 foot long tentacle or grouping of tentacles that extend from scab-like protrusions on her body like tears in her flesh. These seem to manifest without destroying her clothing, and up to 8 may be present at a time. The tendrils are strong enough to serve as vectors for locomotion, acting like grappling hooks that she swings from with speed suggesting they are stronger than they appear. She’s capable of split second changes in direction, climbing, and maintains total control even when flying acrobatically through the air. Her maximum recorded speed was well over 150 mph. There seems to be properties of stickiness, piercing strength, and durability that exist purely when being used as ziplines and grappling hooks, preventing the type of surface from mattering to the power.

Accuracy Thinker Secondary: This secondary manifests as a fine tune of control over the cape’s own body during combat, always perfectly spatially aware and capable of making accurate last second decisions on where to grab with the tentacles in order to maintain speed and perform the stunts mentioned above.

Momentum Muscle Brute Secondary: Lovecraft’s body is capable of easily withstanding the inertia her power creates, as well as the hard landings moving as fast as she does should entail. When taking direct hits, however, the power ebbs significantly. She can also ram into people when moving at high speeds, and maintain her durability, but as noted above this isn’t the main use, and therefor isn’t the most practical approach.

Tinker Secondary: Capable of making personal weapons that are largely still mundane, and have no effects beyond being durable to an unearthly degree, and slotting perfectly into use by your tentacles. They also look Dope as Fuck.

Lovecraft, then still Vanessa, had never been one to want for much. Besides the constant overbearing attention of her parents, one she always struggled to escape, and needing to work so hard to maintain her 4.0, she really was well off. Full ride to college covered her middle class upbringing barring her from the upper echelon of society, and that was a fruit of the effort of constantly working so hard in her schooling.

Hard enough that she rarely got to get out and do things with the people who loved her. But, that was all in the past, she figured, since her dorm-mates and a few others decided to go camping. They were all good friends, the kind that form the foundations of your lifelong friends, you know the type.

She had no idea how to camp. At all. But they were doing it all hardcore, out in Yellowstone off the beaten path like a bunch of dumb assholes.

After the 5th day of being lost… Vanessa and company started foraging.

And… well one of them didn’t fare so well…

At a certain point, Vanessa just wanted to run, and amid all the towering trees and the death throes of her friend… everything went black for just a few seconds.

A black spot spread across my skin, looking almost necrotic. A wisp of black smoke spills out of as a tendril rises from the spot. The red and black color is reminiscent of coagulated blood. Of the blood that Jeremy coughed out of his mouth in his dying moments. It coils into the air, undulating in a way that is uncomfortably… familiar. A thought… no a command. Instinctive. Mapped onto my brain like moving my arm if that was far less controllable. It snaps out to something, a rock? It yanks back to the spot it emerged from in the center of my hand, and now I’m holding a rock. I am holding a rock and a close friend is slowly dying in my arms. Too many voices around me, four others all struggling to grip what is going on in their own way. Gurgling, coughing up spittle and whatever else was now filling his stomach as the poison berries rended him from the inside. Nothing to do for him besides close his eyes and use the rock, against the protests of those around her…