Some digging on PHO reveals that Lilith is a hemokinetic that have done some minor vigilante work and have a small group of hangarounds wearing bunny masks. She first appeared about a year ago but have yet to make a big splash in the cape scene. In the beginning of February she joined Pantheon. 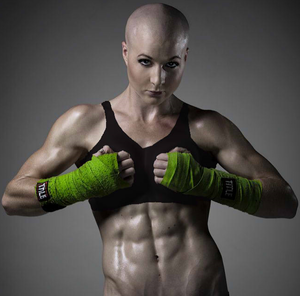 Narcissa in a bodybuilder photoshoot

Narcissa is a muscular goth girl with an intense gaze. She often wears wigs covering her buzzcut.

As Lilith she wears a small leather mask that makes her nose look larger and creates ever changing patterns out of small tendrils of blood moving over her skin and costume. The costume itself is a completely white gothic leather armor that she keeps stainless by use of her power regardless how much blood splatter sprays over it. 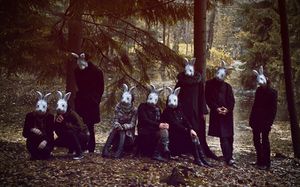 With minions like these, you won't need friends. Oh wait...

Nine bunny masked acolytes armed with miscellaneous weapons such as knives, axes or baseball bats and carrying strong painkillers. These are friends from the sanguinarian circle that today are hangarounds dedicated to serve their mistress. They have various blood groups. To find more minions would be easy but Lilith was given a prophecy that the number nine would be important for her to achieve her goals.

A two room apartment at the 9th floor Downtown and a cheap car from the early 2000’s. She’s the proud master of two black cats cats - Alucard and Akasha - and one white - Angel.

Have about $20,000 at a saving account and a daytime job as a barista at the Dark Wings coffee shop for $15/h.

On an average night out in costume she have the following equipment:

She’s adept at the fighting style Krav Maga, using firearms and have training in basic battlefield tactics from her time in the Israeli army. She no longer practice shooting but trains Krav Manga twice a week. Her hobby is weight lifting and prefers a diverse set of exercises that train her whole body and not just the upper half. She’s also a classically schooled pianist and singer from her days before the military.

Narcissa have kept the discipline and training from her military life alive, making sure to live a very tidy lifestyle.

Adrenaline rushes is one of the few things that make her feel truly alive and is thus something she constantly seeks. She’s the kind of vigilante that believes that end justifies the means and sees fallen civilians as collateral damage, something to avoid but ultimately nothing that will keep her up at night.

She believes the powers are of supernatural origin and that she actually became a vampire. She doesn’t refute science in any way, but since they’ve yet to come up with a coherent and believable explanation she’ve created a picture from what she herself have seen.

She is a hemokinetic that can feel and control all blood outside living bodies within 50 meters at a speed of 50km/h (31mph). Her maximum limit is 11,500 liters of blood. This blood have the characteristics of water in that it still is fluid and dull. It cannot grab anything or become dense enough to punch someone.

Within 5 meters she can also crystallize blood into solid objects such as daggers, swords or shields of the same volume. These will have the same properties as steel in endurance, potential sharpness etc and can still be controlled by her kinesis. It takes 5 seconds per deciliter crystallized. These cannot be mechanical objects, such as a gun or watch. Leverage and weight in a weapon can increase the speed and force of the object but naturally requires more available blood to create. If they are outside her 50 meter range or of she is rendered unconscious the items in question will turn liquid once more.

The drawback of the power is that when she starts to suffer from hemorrhage she will grow agitated at class I and angry at class II (see below). To refill her blood supplies she can drink blood that then changes to the correct blood type and spreads to her veins at a rate of 1 dl (3.4 ounces) every ten seconds. Her agitation will linger for 10 minutes after being completely sated.

The power can be quite versatile but is harshly hampered by the availability by blood in the area. In the start of a battle she’s really weak but scales in strength as it progresses with cape’s with human anatomy. She’s also quite the glass cannon without any Brute powers whatsoever. Her biggest advantage is that she have a blaster aspect that can hamper most non-armored opponents. Against enemies with heavy armor she’s next to useless.