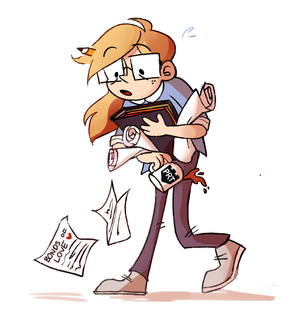 As Knockoff, her signature item is her patchwork cloak comprised of various hero and villain insignia sewn together. With it she wears a set of armor that looks strikingly similar to old surplus PRT equipment.

Knockoff's existing tech is based off members of the Contingency Protectorate established after the anomaly. As such, if damaged it is very unlikely it can be repaired unless she can find someone with a similar-enough power to leech off of.

blackout (Willow Whisp x Weave x Beauty)
Scene-distance teleport. Only works if both her and her destination are unobserved (electronic sensors dont count, so she can tp in front of a camera). Built into her armor.
no u (Shatterbones)
If Knockoff takes lethal levels of damage, it's reflected back on the attacker instead of hitting her. Single use, built into her armor.
u know what u did (Pale Huntress x Adjudicator)
A gun that shoots little crystalline needles. If one hits you, you are inflicted with overwhelming guilt and shame and must make a saving throw or fuck up whatever you're doing. In addition, where it hits transforms the skin into a slowly-spreading crystalline material, which when looked at shows the reflections of what you feel guilt over. Caveats: If it hits armor, the Master effect doesn't happen but the struck bit of armor still does the crystal+reflections thing. If bare skin is crystallized, it reverts when sleeping after a day or so.

The entire system that she idolized fell apart around her and in an attempt to put all the pieces together she just made it far, far worse. Everyone and everything she loved died around her and she hasn't fully processed that because naturally she just piled it all deep down and dove into her work to the point that she triggered from the stress and anxiety, which by no means solved the stress as she just developed new and interesting ways to fuck up, with an added splash of imposter syndrome.

Knockoff is a Tinker/Trump who gains her spec based on capes she's been near. Being around multiple capes causes the spec to be a hybrid of the powers, allowing her to capitalize on interesting power combinations. Other tinkers will cause her to have a watered-down version of their spec that only works as hybrids with non-tinker powers.

The power will be stronger if she has more "direct" interactions with a cape, such as talking or combat. If she's just sitting near a cape, it will take a long time to build up an equivilent spec influence.

Unfortunately, having more than a handful of capes "influencing" her at once gives her splitting migraines, meaning it's all but impossible to get janky with it. In addition, after a few days without "topping up" a cape spec, she loses it.

At the ripe old age of 14, Sara, a rabid cape fan, signed on as an intern with the Portland PRT, as part of a programme introduced to help make it harder to identify local Wards. While at first the job was mostly make-work from the Operations Bureau, her drive quickly resulted in more responsibility for the young lady. Even if she was just a kid, she strived to make sure she was just as important to the department as any of the capes.

A fateful week in the summer of 2010, the city was enveloped in a time distortion field. Millions died as, inside an impenetrable bubble, 28 years passed in the span of a week. The PRT was among those casualties, as nearly every employee was downtown for an all-hands meeting. Sara and eleven others were the only staff left accounted for.

She was left in a ruined city, her family almost certainly one of the millions who starved in the first months of bubble-time. With nothing else, she threw all her work into the recovery effort, helping organize and brief the resources outside departments were able to lend.

At some point in it all, she wasn't sure when, she'd triggered from the stress. What little stability in her life quickly eroded, as she found more and more of herself drawn into building machines to fix things. Solve problems, just like heroes were supposed to do. And if she tried hard enough, maybe, just maybe, she could solve the problem that had started it all.

That was the last anyone saw of her.