Hunter and Prey are known to be Amanda Madison Monroe after a very public trigger. Leaving the scene looking very distraught she had been seen in random towns and cities seeming traveling. Hunter and Prey had a very open trigger leaving them with no secret identity, even then their physical changes are large enough to make it impossible to not know what she is. At the moment the Protectorate specifically the capes that caused her trigger are trying to find her to apologize. 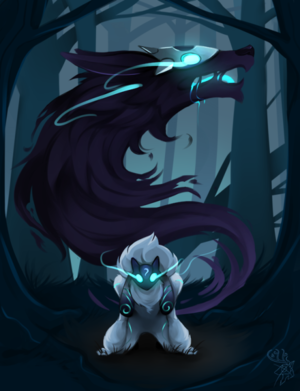 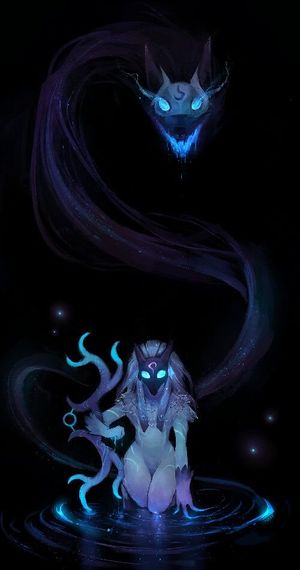 Hunter can range from a masculine human covered in black to dark grey fur to a wolfs head with a seven foot fur covered tail flowing behind them. Their mouth a eyes glow blue and glow brighter the more well they have.

Prey can range from a feminine human covered in white and light blue fur to a seven foot tall figure with legs similar to a hoofed animal and having only three finger with slightly longer then normal arms. Their eyes glow a mixture of pink and blue and grow brighter the more well they have.

They both have a shared height of 4’ 7” in their powerless form.

A book bag and duffel bag to hold food and clothes. Live with Dove.

Prey seemed more emotionless and monotone. She rarely shows emotions but there is a hint of endearment in her voice when talking to Hunter.

Although of the same mind Hunter and Prey are like their own two people one representing the emotional side of the brain (right brain I’m pretty sure)  and the other the more logical left brain.

They both have a disdain for the Protectorate, blaming them for their trigger and the pain that was caused during it.

Due to Amanda’s powers her appearance was slightly altered due to her trigger (similar to Scrub) leading to her current appearances.

When Amanda triggered she created a permanent projection that shares a mental link with her and a slight mental block to each other leading to one having muted emotions and one having no emotional filter. Due to this it is impossible to tell which one is the original and which one is the projection. Even so when one of them dies within a day or two one can revive the other.

They also both share what can only be explained as a well of power that they both share. Depending on how much of the well they share their powers increase or decrease. If both are sharing the well equally they will both be a half power, when one has all of the well one is at full strength while the other looks and is a baseline human.

Hunter the more of the well Hunter has the faster he can how and depending on his speed he can bite through tougher materials. Although the striker power can only be used every few seconds. At half well he can start to fly and at full well he can fly up to 55 mph and bite through concrete. Hunter is able to specify what he wants his striker power to go through, either living or non-living things or both. If he chooses the bite through living things he can easily bite through human flesh and bone, although he can only bite things that can fit in his mouth.

With the more well Prey has the more durable they become, at half well they are fully transformed and will start growing in size the more well she has. At around 50% well Prey can easily take hits from wooden baseball bats without feeling pain, shots from low caliber guns and sledgehammers will hurt her while being driven over a car going around 50-60 miles per hour will instantly knock her out. At full well she can take low caliber shots and sledgehammers like they are nothing, and will feel pain when hit by high caliber guns and run over by cars going around 50-60 mph, it’s very hard to instantly knock her out but things like point blank grenades to the head with be able to knock her out.

At around 25-30 meters apart the two will begin to feel increasingly uncomfortable. At 45 meters Hunter will die as if having been crushed, Prey will also feel a sharp twinge of pain for a moment as well.

For one of them to transform from no well to full well the transformation takes 3 seconds.

Like, after losing a close loved one - a sibling who was all they had, - they went into an uncontrolled downward spiral and made preparations to commit suicide. Two capes arrived on scene - one who could sustain people’s bodies, the other an emotion manipulator.

Emotion manipulator tried to talk her down, but his influence only made her feel worse, and even if she didn’t truly want it, her grip slipped, torn between wanting to die and not. When she hit the concrete from a couple of stories up, she was still alive, just in massive pain as another cape sustained her and the master who had accidentally mentally pushed her over the edge continued to feed her useless positivity. Torn between two powers keeping her alive when she no longer wants it, keeping the two sides of herself in balance when she wants them to keep spiraling till she dies, she triggers.

Amanda was born in Rochester New York, and grew up to be an artist. After her last loved one, her sister, died she went into a downward spiral leading to her trying to commit suicide. Due to two capes stepping in they caused her to trigger. In her fear and confusing she left Rochester with some clothes money and things she just simply traveled until she found herself in Devilfish.

After ariving in Devilfish, seeking to restock their supplies of food the two robbed a small gas station, simply walking in as Prey started shoving things into one of her bags. As they left they were meet with Archemage, causing them to instantly surrender, not wanting a fight. She did find the opertunity to con the hero by pretending to not having enough money to pay, though it was for a good reason seeing as she had little money left.

Later after taking a break in a park someone had called the PRT hotline, worried about the two unknown capes as well as thinking the ketchup around Hunters maw was blood (somehow). The hero to inestigate was Black Dove, the nonexistant conflict was resolved and the two started to talk, ending up with Black Dove offering the duo the oppertunity to move in with her.

The next day Prey went on a walk around the neighborhood, just to look around. After noticing that she couldn't sense Hunter anymore she ran home, only to be greeted by a somber Wren. Hunter was dead, spontaniously getting squished by a pancake due to them being out of range of each other. Not knowing about the resurrection part of her powers, or range, Prey was distraught, breaking down. Internally wondering why everyone she loved seemed to die.