Helios is a somewhat well-known cape originally from Los Angeles, California. He was a Ward for a short time before he turned 18 and moved on to the Protectorate. A majority of his years as a hero were spent in Los Angeles, where he learned the tricks of the trade from several of the heroes there. Eventually after an unknown incident, he was transferred to Ashton, Washington. He spent approximately a year and a half in Ashton. After participating in an Endbringer attack that caused the death of several of his close friends from the Los Angeles days, he took a six month sabbatical and went dark from the public eye. Seeking a change and a chance to go somewhere different, he was transferred to Devilfish, Minnesota where he currently resides. 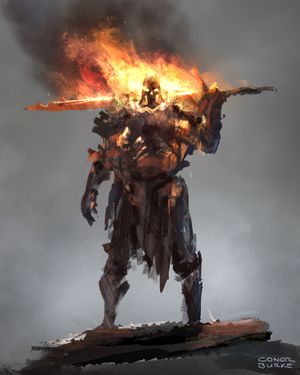 Helios in his 'attack' armor. 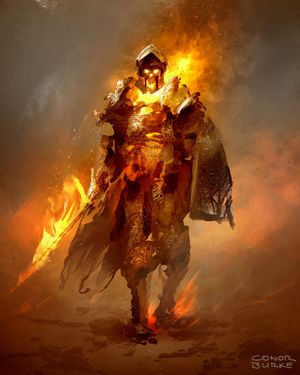 Helios in his 'defense' armor.

Santiago is about 6 feet tall, and remarkably fit. He maintains a rather plain haircut, as well as keeping himself clean-shaven. He has brown eyes, and tanned skin. His cape costume obscures any details about him, and he does his best not to get into any trouble while in his civilian guise.

Bachman uses his years of wrestling, Brazilian Ju-Jitsu, Boxing, and Muay Thai to his advantage, often using it to subdue capes that won’t go down without a fight. He also has an excellent storytelling voice, and a green thumb that he enjoys cultivating.

Fairly utilitarian. Santi believes in a Greater Good™, although it’s a vague and nebulous thing that he’s hard-pressed to define using exact words. Despite what he thinks his beliefs are, Santiago doesn’t believe in a Greater Good, but rather the idea of a elite Parahuman class. He will never admit this, as he doesn’t realize it himself. He believes himself to be a hero, and commits to heroic acts. However, this is mainly only due to the fact that being a villain hasn’t crossed his mind. He simply hasn’t thought of it. Even if he did, he’s too far down the rabbit hole of Heroism to back out. Santiago believes not in terms of good or evil, but moreso in vague generalizations revolving around “might makes right,” and how history is written by the victors. As such, he always tries to make sure that he wins.

Helios is a “brute” pyrokinetic. Or at least that’s what he presents himself as. In reality, Helios is able to telekinetically control the ash that he creates within an 18 inch area away from his body. Within a 20 foot range of his body, ash around him with move towards him, stopping if it meets any resistance. While coating himself in ash, he is able to lift 500 pounds in each hand, or 1050 pounds if using both arms. More or less depending on what muscle group he uses. In addition to this, the armor acts as a forcefield- able to withstand damage until the ash on his body is dissipated. The smallest amount of ash that will give him the forcefield and strength is one third of an inch on his body. While he usually creates a suit of armor out of the ash- he doesn’t need it in order to function at this fullest, he merely pretends that he does. Helios can create fire from anywhere on his body, with it reaching temperatures of approximately 1850 degrees Fahrenheit. He can control the fire up to 12 inches away from his body. He can throw fire away from his body, although once it leaves the 12 inch range, it regains all laws of physics and begins to cool and dissipate. He has a fine control of fire and ash while using his telekinesis. His fire causes a larger than normal amount of ash to be created, and this ash is thicker and grittier than normal- resembling volcanic ash. He cannot sense the ash once it leaves his 18 inch range, although he is aware of the ash in this 20 foot range in its relation to himself. He is immune to fire, heat, ash, and things related to that. For example, he can breathe through his ash, and his lungs will not be burned by superheated air. He could stand inside of a raging fire and be completely fine. His skin is immune to any sort of abrasions coming from ash, or any burning material. Etc.

Helios’s secret is that he pretends to need his armor of ash to be a brute, and doesn’t let anyone know the range of his abilities or the control he has over them. He does not tell anyone that he has telekinetic control over ash or fire, instead telling people that the ash simply forms around him on command.

Santi grew up in the city of Los Angeles, born to a white father who moved there for business, and a Latina mother who had lived in the area her entire life. Bachman was awarded a rather comfortable life due to his parents both making fair salaries, and they were a comfortable middle class. While in high school, Santiago was fairly popular due to his drive. He did wrestling and mixed martial arts, occasionally trying his hand at contact sports like rugby. He ran with the “in” crowd, and was frequently out partying. Grades were good enough to get into the college he wanted- and his sports scholarships didn’t hurt his chances either. Santiago was undecided in his major, having no strong feelings towards any specific career path one way or the other. What he did enjoy was the parties. The late nights and bright lights. If there was alcohol involved- he was there. Even better if he could smoke and drink at the same time. One night spiraled rapidly out of control. Two story house out by the beach, some rich kid’s going away party. Drink was flowing endlessly, and the light from cigarettes and blunts could have lit up the night for miles. Santiago partook, of course. Unbeknownst to everyone at the party, a small fire had begun due to a cigarette butt that had been flicked by the side of the house. The fires spread underneath the house, the embers spreading throughout the support beams of the house. The party continued. The heat of the bodies masked the start of the flames, the smell of the parties masked the smoke- and with all the music blasting through speakers, no one could have heard anything. When the first person noticed the flames, it was too late. Unattended bottles of liquor caught fire, spreading the flames to nearby areas. With everyone so intoxicated, the crowd soon turned into a stampede. Unluckily for Santiago, who was at the center of the house at the time, this stampede would be his downfall. With all of the weight of the partygoers on one side of the building, and the foundation weakened, the house began to collapse in on itself. First in inches, then feet, then all at once. Santiago found himself trapped underneath the weight of a house that was rapidly burning like a tinderbox- with no one aware. The ash settled on him and began to burn his skin, the flames getting almost close enough to lick at him. The air burnt his lungs with every breath- and the weight of the rubble on him made sure that every breath was more shallow than the last. His strength wasn’t enough to save him, and there was no one around to hear him scream. Trigger.

He joined the L.A Protectorate soon after. Made it onto the cape scene there for a few years, until transfer paperwork to Ashton, Washington came across his desk. He took them without a fuss.

After several of his friends died in an Endbringer attack, he took a 6 month sabbatical before returning to duty in Devilfish, Minnesota.

While serving as one of the higher-ranked members of the Devilfish Protectorate, Helios was typically busy with a variety of tasks. He received some public backlash after a fight with the villains Duelist and Misfit, when he committed an act of what the public perceived as "Police Brutality" against the villainous Changer known as Misfit. She was apprehended, and later escaped.

Later on, he came face to face with Duelist yet again. This time, she injured his knee enough to put him out of commission for weeks, until he was able to receive healing from a Rogue known as Galen.