From WormRP
< Harbinger
Jump to navigation Jump to search

Damian Waltz and his mother, Emma, are a parahuman mother/son team that are nearly always found together. Damian, as Harbinger, is thought to be a powerarmor tinker and to have the power to make bubble-like force-fields, and Emma as Origin exhibits strong Brute powers. 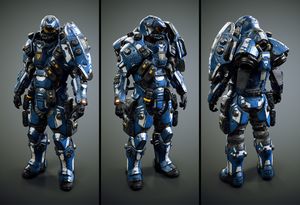 Damian is a shorter teenager for his age, about 5'5. He has pale white skin and jet black hair, and has large dark rings around his eyes as well as large bags under them. He generally dresses in dark hoodies and jeans, with the hood almost always up.

Emma, on the other hand, has the same dark hair as Damian, cur at around chin height. She lacks the bags or dark circles around her eyes, instead having a near-flawless, young looking face with perfect makeup at all times. She dresses in various apparel depending on the day, although she seems to have a set of clothing she sticks to without deviation. She's most commonly found in a formal business suit with pants.

Character: For Harbinger via Medjed

Appearance: Blue armor to match his force fields Abilities: Basic Power Armor. Offers protection equivalent to plate armor and a class 3 ballistic vest, Can run at 30mph for an hour. Takes 5 seconds to get that fast, Duration: Until broken Notes: The point is to make Damien look like a tinker with his own powers and not the Master of Origin. So he doesn’t get instantly yeeted. Gallant did it in Worm Canon

Damian is a depressed soul. Tragedy has struck him deeply early in life and he has never truly recovered from it. He's only a ward to keep himself safe, and only patrols because it's a requirement for a ward. The only thing that really motivates him to do good is his mother's desire to help other people.

Emma is an outgoing, motivated individual who values nothing in the world more then her son. She's caring and kind, and will help people in need at a moment's notice. She can be a bit flamboyant in her showmanship, and has a jealous streak a mile wide when it comes to her son, but she is a good person who does good for the sake of it.

Emma and Damian together make a weird pair. In a way Emma provokes opposite reactions in Damian, he still loves her and how she dotes on him but there are many, many little details that make her existence a constant torment for him, reminding him of who he lost and that she's not real, just a projection.

Emma on the other hand loves Damian, to an unhealthy degree. If someone tries to hurt him she will lash out, sometime verbally, sometimes physically. It hurts her to know that her son doesn't love her as much as she loves him, and she knows that she's just a projection that's imitating his mother. However, she works her absolute best to make Damian love her as he once loved his mom.

Damian's power allows him to manifest a perfect-to-life projection of his mother, Emma Waltz. Emma died years prior, but has her image re-manifested in the wake of Damian's trigger event.

The projection of Emma has it's own personality, based off of Damian's memories of his mother. The projected Emma is fully sentient and can learn and have her personality grow over time.

The projection is short ranged, having to stay within 2 meters of Damian or disappearing and having to be re manifested. Wounds taken by Emma are reflected onto Damian.

The projection takes three seconds to materialize, during which it appears in a translucent state and quickly becomes more real.

Emma also has the ability to defy gravity a very limited amount due to her nature as a projection, enabling her to float off the ground but not perform any feats of true flight.

Damian gained four minor powers through his multitrigger, but none manifest themselves through him. Instead, all are activated by Emma, who uses them to protect Damian as best as she can.

The powers gained are:

The ability to take a rough estimate of someone's skills whenever she's within 2 meters of them. This is a vague feeling, something like "Is probably good at torture" or "Is very skilled with use of their powers." This wouldn't give anything away about the nature of their powers unless their power relied heavily on a skill, for example someone who created guns would probably be heavily skilled in shooting, which might be a giveaway.

Every five seconds she can create a bubble-like force-field around a individual within 2 meters. This force-field lasts for 5 seconds, and can negate one hit, upon which it pops. The hit doesn't have to be strong, a normal man's punch could break it.

Emma can view the line of sight of individuals, even if she is not able to currently see the individual. This shows her the cone of vision of the individual in question. Although the cone can't be seen through walls or other obstructions, it can be seen even if the person who is the origin of the cone isn't in view.

Emma has a subtle master ability that is activated upon looking at her. This power attracts attention away from Damian in social situations and in fights. An individual who interacts with Damian and Emma will be more likely to focus on Emma if there are no other prior interests in Damian, such as a specific reason for seeking him out or wanting to talk to him. In fights this means that, if someone was randomly choosing between attacking Damian or Emma, they would always strongly lean towards attacking Emma. However, if a tactical decision is made (Such as finding Emma too hard to damage or too strong) they can easily overcome the compulsion and attack Damian instead.

Emma Waltz was 17 when an unfortunate night of teenage shenanigans left her pregnant with Damian. Her parents were devout Christians, so abortion was not an option. Instead she took the hard path of being a single mother, the father having left the picture as soon as he found out.

Emma was one of the strong souls who flourished under pressure, and even with the burden of a child she managed to graduate, first high school then college, majoring in paralegal studies. She got a job as a paralegal, and worked hard to support her child.

Damian had as good of a upbringing as one could hope for. His mother wasn't home much, busy with work, but when she was she always made time to play with him. It wouldn't be an exaggeration to say that she was the light of his life, always cheery and happy to see him.

Unfortunately, the light was snuffed too soon.

When he was 12 years old he got the news. His mother had been killed in a cape fight, some stupid gangland violence between two villains.

That was the begging of Damian's descent into a deep, bottomless pit of depression, one that he still has not managed to escape. His only light was gone, and he was lost.

With no relatives willing to take him in, he was shunted to the foster home system. No home seemed to stick, and eventually Damian gave it all up. He ran away, became homeless. Living off panhandling, dodging police, he managed to survive for over a year on the streets.

His trigger even came during the violent gang attack when the Russians attacked the Golden Hoard. He was stuck in the middle of a street when the gunfire began. He saw some super-powered individual fighting, saw the gunfire going off, and realized this was the end. He was going to die, alone, on a street with no one to remember him. The only one who would have cared was already dead.

Then... something. After that, familiar warm arms enveloped him, and he was safe again.