Faust reside at the Crossroads junkyard and consider the area its territory, taking violent offense to any trespassers that doesn’t announce themselves and respect Fausts wishes while at the premises. The owner of the Crossroads junkyard, Jonas Greenville, disappeared after Faust took residence there and is feared to be Fausts first victim. The PRT have stated that there’s no direct evidence that there have been an homicide and that they will treat it as a missing people’s case until further notice. They advise people to take caution and avoid the area at all times. The Protectorate, or PRT, have yet to make direct contact with Faust.

It is rumored that a group of trespassing teens promised to never return and bother the being, and in a post on PHO one of the teens tell of physical pain manifesting at the mere thought of doing so. 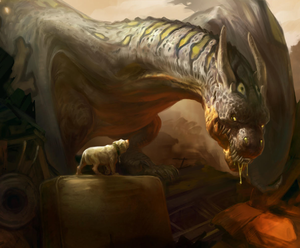 Faust and his pitbull Georgie

Faust is an 1.5 ton wyvern with a withers of nearly 2 meters and measure 8 meters from nose to tail. It has roughly the frame of a Majungasaurus with wings and walks like a bat on all four. An smell of ozon oozes from it’s breath.

A decent sized junkyard, with all that it entails, but without much means to use it and a faithful pitbull named Georgie.

Few and far between.

Has a superiority complex royale and would have a very hard time to grasp that it might’ve been outwitted. Extremely territorial and have a deep grievance with whoever would trespass unannounced or doesn’t leave when asked to. Prone to fits of rage. Likes its life quiet and calm, with an occasional respectful guest that treats it as it thinks it deserve.

It is very superstitious and claim to know where the powers come from.

Can bind a person to a promise they make. Faust need to be physically present, within 10 meters, and be able to hear what they say. Considering breaking it will afterwards cause severe physical pain and strong waves of nausea. Actually breaking it makes the distress chronic for two weeks and, if they're parahumans, cuts their connection with their Shard. This disables the use of their powers for the duration of the effect.

The oaths phrasing is secondary to the intention; if one side promises to aid the other in battle any thought of bending words will cause the distress.

The maximum duration of a pact is one year, after which it needs to be renewed to have any effects. The pact can be dissolved in a similar manner to binding it if both people are present and consent to it.