A fairly new ward even before her transfer, transferred in from Pennsylvania. She's been previously marketed as some kind of cape able to create mythical weapons and armor, perhaps a tinker of some kind? 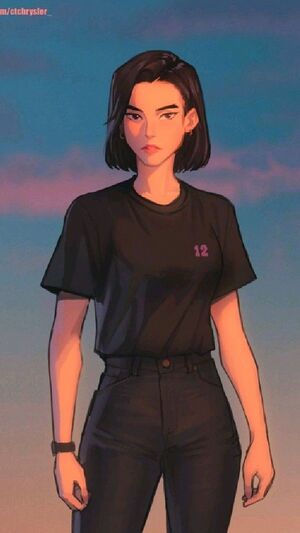 In her costume she appears in white paneled armor, generally appearing as a cape who takes herself seriously. Outside of costume she's a young Asian American woman, standing at about 5'2". She generally wears fairly casual clothing to any given situation.

The following represents the typical equipment she brings with her.

She lives with her aunt, Black Dove in her apartment. She doesn't own a vehicle of her own.

She's temperamental, especially in the wake of her relatively recent trigger and being forced to move to Devilfish. While before she was a relatively calm and collected individual, the events of her trigger and her power partially restructured her personality, putting her more on a hair's edge, more likely to stab first and ask questions later. With time she may learn to overcome this influence, though it will be an extensive process.

She is a Noctis cape as a part of these changes, with the notable fact that when she tries to sleep her power brings up the memory of her trigger as fresh as if she was just experiencing it.

Fabula is a Trump capable of copying powers in a unique form. She's able to manifest them as equipment on her body or as a weapon in her hands. She's only able to manifest 2 pieces of equipment at a time. Once she has manifested a piece of equipment, it is "Locked in" for 10 seconds or so before she can replace it.

When manifesting equipment, she chooses either Weapon or Armor, and rolls for 3 of them from her entire list. If a parahuman she has Equipment of is in the general area (Within 100 meters), that Parahuman's equipment is not rolled for, and is instead an additional option she may choose from alongside the 3 rolled options (As per her NULL equipment). She is given 5 seconds of mental pause to consider and make her choice, which she may use as a mental break in battle. Once she has chosen, she may choose any of the other options to be Blacklisted for the rest of that encounter. Blacklisted equipment may not be rolled or chosen for the rest of that encounter.

Given a full 6 seconds to concentrate, during which she can't do much more than stay still, talk, or walk a bit, she may bypass the rolling option and instead choose a piece of equipment to use, but it becomes Blacklisted for that encounter.

Fabula copies powers in a bit of a unique way. Whenever a piece of her armor takes a hit from a powered attack (I.E. Brute fist, tinkertech rifle shot, etc.) Or a weapon strikes or draws blood from a parahuman or power construct, they are scanned. Each parahuman may only be scanned once, and renders 2 pieces of equipment between Weapon and Armor, (Could be 2 weapons, a weapon and an armor, or 2 armors). The copies assigned to equipment are never exactly the same as the original power, but will often share similar themes and trend towards imagery the target largely and generally projects.

No matter the equipment she has manifested, she always knows how to handle it moderately well, and will find that to her they weigh fairly light, enough to easily wield no matter the weapon. Additionally, manifested weapons and armor are always sized perfectly for her, fitting well around whatever armor she is wearing. Other people, even if they wield the equipment, cannot use the special abilities they give. Equipment may come with abilities with cooldowns. When used, that Equipment cannot be swapped out until that cooldown finishes.

Weapons generally encompass things that are considered to be weapons, but will trend towards edged melee weapons (Swords, knives, axes, glaives, etc.) barring cases where the power is more directly suited to other kinds of weaponry. Powers given by weapons will generally lean in an offensive way, or some kind of direct projected effect (I.E. a healing touch could be a healing dagger of some kind, since it is projected outwards to others.) Weapons, unless otherwise noted, will weigh their equivalent in steel, are completely invulnerable, and are as sharp as a well sharpened chef's knife.

Armor generally encompasses things considered to be defensive in nature, armor, shields, even jewelry or clothing, and tends to diverge more than Weapons do. Powers given by armor will generally lean in a defensive or self focused way, or movement enhancing, making her body more durable or increasing her strength by a small degree, or allowing flight. They will tend to weigh what they appear as, with metals weighing like steel and the like. Armor is also completely invulnerable, though attacks past a certain thresh-hold will go through the armor and hurt her directly. Unless otherwise stated, it will generally absorb roughly a sledgehammer blow's worth of damage from any given attack, letting remaining damage leak through.

Fabula is additionally a Noctis cape, being unable to sleep, largely stemming from changes her power inflicted on her mentality, in addition to the fact that whenever she attempts to sleep, her power keeps bringing up pictures of her brother's body.

This is the form I will be using to track her powers and Blacklist. It has convenient roll tables, including which numbers to reroll for, and individual choose codes for choosing equipment not on the Blacklist table, which will all be rolled via Huntress when fighting.

Meta Powers will be generated via a collaborative channel then approved as equipment.

Angela was born to her father Arden and her mother Olivia in Harrisburg, Pennsylvania, along with a younger brother by the name of Paul. They lived a fairly happy life. Hell, she even had an aunt in the protectorate over in Devilfish (Black Dove). She was a bookish girl, not necessarily shy but definitely preferring the company of a book to a person. That didn't stop her though from excelling in most of her classes. She was doing very well for herself.

Unfortunately, unknowingly her younger brother, not quite as gifted (And not quite as hardworking) was rather jealous of her success, getting her parent's attention. She still loved him, but he began to plot, trying a number of plans to make her fail, and bring him up in his parent's eyes. While she suffered under some, she largely persevered and was praised by her mom and dad for her perseverance. This continued until one day Paul tried his largest scheme yet- he drugged her drink with his Adderal prescription just before one of her big exams, thinking it will keep her up and then make her too sleepy during the exam, making her fail it.

Unfortunately he miscalculated the dose. Angela had a heart attack, and was raced to the hospital, where it was discovered she was suffering from an Adderal overdose. When confronted, he confessed in panic, and eventually they learnt of the rest of his attempts to stop Angela. Arden and Olivia were very, very mad, and once Angela had fully recovered- they delivered their punishment. Paul would be sent to a corrective boarding school. To Paul this was devastating, essentially being being disowned after watching his parents fawning over his sister worriedly over the past week. Paul triggers with a Master power, one which allows him to touch people and add them to his retinue, making them love and fawn over him while seeing all others as enemies.

It would be nice to say he was responsible with his newfound power. He was not. Paul immediately used it on both of his parents, and then on Angela herself. He languishes in their favor for a week, but grows hungry for more, eventually subsuming their neighbors into the effect as well, straining his power to its current limits. This is when the heroes are alerted to what is going on, and the local Ward team is sent to investigate- and then deal with the issue.

The operation is a complete and total disaster, what should have been a simple analysis and then strategic taking out of the master turned into a clusterfuck as the inexperienced ward team fumbled multiple times. Several civilians were hurt as they literally hurled their bodies in front of attacks meant for Paul, until finally one lands a glancing blow, snapping Angela and other nearby victims out of Paul's power. Another Ward, a shaker by the name Sandstorm finally sees his opportunity as Paul staggers, and sends in his most powerful attack to take him out and end this mess.

Angela watches this happen wide eyed as a massively overblown wave of sand rushes down on her younger brother, and she leaps to push him out of the way. She is far, far too slow, but is caught by the edges of the attack, and sent hurtling into a wall, the fresh pain of several broken bones. The sand washes back as she stares unbelievably at the mangled corpse of Paul. Trigger.

Post trigger Angela reveals that she now has the strange ability to manifest a glass sword and armor to her parents, who then have her join the Pennsylvania wards, despite her extreme dislike of doing so. In the wards she trains for a month or so with her power while she recovers, but in an incident where she was training with Sandstorm, when he seemed to casually note her ability as weak, she seemed to snap, claiming Sandstorm killed her brother on purpose and then subsequently manifesting her NULL sword and using it to cut off his hand. It was later healed, but Angela ended up being transferred out of the Pennsylvania wards, to head to Devilfish under the care of her Aunt in the protectorate (Black Dove) to learn to manage her symptoms and power.