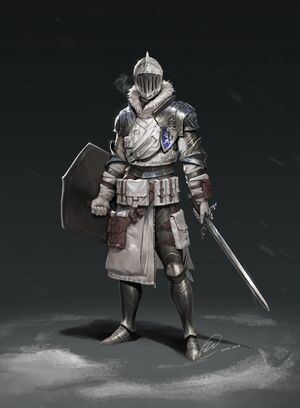 The news has noted Eismeister as violent, dangerous, and a decently powerful cryogenesis cape. Civilians are advised to not approach or interact with Eismeister. They report that he wears black armor, carries a two handed sword, and has not shown any concern for property value or others.

Eismeister was connected to the Black Friday Cloverleaf disaster. An incident where the Cloverleaf Acres Mall was briefly turned into a horror labyrinthine butcher plant.

Eismeister has been reported to have taken part in several higher level heists. Namely, he has nabbed a bag full of jewelry from a Bryn Mawr Jewlery Co., stolen a hundred pounds of ancient Persian silver artifacts from a museum truck, and to have been behind the theft of the crown of the Hawiian Royal family. The Hawaiian Royals, as well as the Musem of Devilfish, have collectively put out a generous bounty for its safe return as well as his arrest.

A report from a local Catholic Orphanage states that a knight in a Snowmeiser costume gifted over fifty custom, handmade, diamon encrusted silver necklaces to the orphan children. No one had the heart to take them back for suspected stolen materials.

Gabriel is an average, slightly athletic guy in his mid-twenties. His sense of style is quoted as being “jeans and grunge band shirts”. He always wears a pair of dark aviator sunglasses. His face looks as if he hadn't shaved properly in three weeks while living off coffee brewed with redbull. His shaggy brown hair falls to his shoulders, and, despite being in his mid-twenties, seems to have wrinkle and lines from heat, hard work, and stress. His nose is on the larger side and looks to have been broken multiple times in the past whilenever being set correctly before healing.

Eismeister wears black plate armor in a late 15th century fluted gothic style. On the chest is a depiction of a cherry tree made of silver with diamonds as the blossoms. Under the plate is a mail hauberk, and a thick cotton gambeson. Everything is masterfully made and fits him like a second (and third and fourth) layer of skin. He carries a hand-and-a-half sword on his hip, single bladed and straight, (much like a messer) the hilt is adorned with more silver and blue diamonds, as well as the base of the fuller. The blade is a base of hardened high carbon steel, coated in a layer of silver over the spine and center.

The picture is not accurate. It shows a knight in silver armor that is intermixes with wintercoats and pouches.

A house he inherited from his parents in the suburbs. Has a backyard, and a small workshop. He only really needs to pay for utilities and insurance and he works as an artisan smith, where he has built a decent online following for his blade-craft, to do so.

Gabriel is…hurt. Closed off. After he triggered, he found that most things in life give him no joy or excitement anymore. So, he withdrew into himself. Now he is a very quiet and cold person out of costume and only ever feels anything when he dons his armor. He lives for the joy of contest. The struggle for life, for him, is the truest reason to keep living.

Eismeister’s primary power is being very cold and eminating this freezing cold into the environment around him. His body is at a constant -200 C (-328 F), and he imparts this tempurature into the molecules around him. The longer something is in his vicinity, or even worse, touching him, the closer it gets to -200 C. If he stays in a poorly ventilated room for long enough, the air will start to cool as well. Objects follow normal rules of conductivity (i.e., metal cools faster than a gas, winter coats withstand his temps for a time, etc).

Objects that are cooled to below freezing (0 C/32 F) can start to be manipulated by him, even if he did not freeze the object himself. The range on this manipulation is about 5 meters in a sphere around him. His manipulation works on the molecular scale. The less energy an atom has, the less interference that will be in his way, making it easier to control for him. He can order molecules to change density or positioning to influence their strength and toughness. He also is able to imbue any melee weapons he carries with enhanced power and sharpness. A sword at his tempureture limit of -200C will hit hard enough to knock a car over.

The manipulation of freezing molecules is manton limited. Another cryogenesis cape can't have their heart stopped because he manipulated it. He is also unable to affect his body in any way.

When running in a mostly straight line, and given enough time to pick up speed (a single round from a full stop), he can run up to 40 miles an hour, but doing so is very strenuous and will massivly draw up his weakness if he goes for too long.

Eismeister does not get winded, per se. The more strenuous an activity is, the more signs of hypothermia show up. Symptoms of shivering, tiredness, slight confusion, fumbling hands, etc can occur. He can be in active combat and using his power for a few minutes before he shows any of these signs, but sprinting will start showing signs very quickly.

Gabriel was…a solitary child. He grew up in his mid-sized suburban house with his parents. His mother was doting and his father strict. His father was an old school craftsman and aimed to teach his somehow to be a proper man, while his mother got him his first guitar and vocal lessons. Outside of working in the shop and learning his music he didn’t do much. As he grew, he went on to pick up blacksmithing and became good enough that he could sell his blades for a profit.

At the age of twenty-two him and his parents were doing some last-minute Christmas shopping late at night. They take what they think is a shortcut when a loud bang rings out and his father falls to the floor. A hand grabs him from behind as the first gunman grabs his mother demanding her valuables. She fumbled while handing them over and without hesitation they killed her as well. Turning to the still restrained and quietly sobbing Gabriel, they say “Welp…can’t leave any witnesses. Sorry kid.” Before pointing the gun at his head. In the frigid winter air, he wanted nothing more than to fight back, to be able to hurt them, and to be able to get away. Gabriel felt something stir from within him and in that moment he broke. Before they even fired a bullet he fell like a puppet with its strings cut. Moments later a siren rings out near the alley so the muggers pound pavement, leaving the traumatized boy to deal with the frigid cold all alone